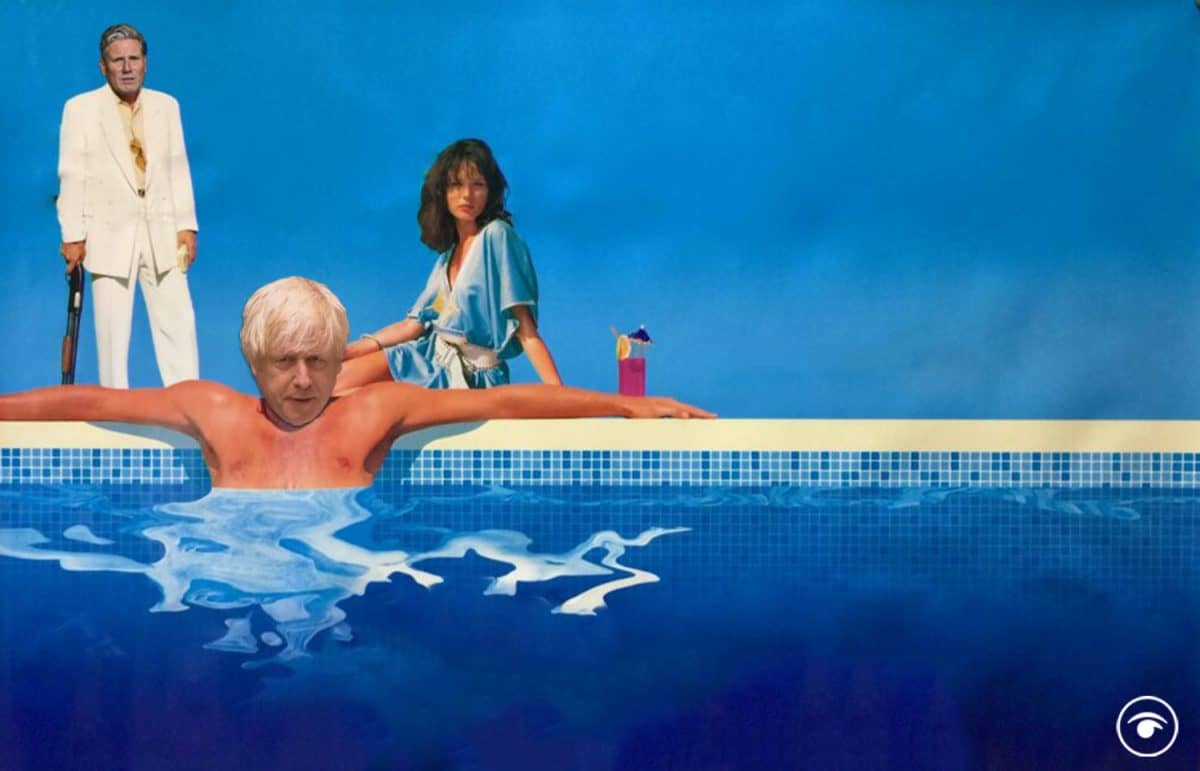 With Boris Johnson in isolation, the despatch box opposite the Labour leader was empty, with “Chequers one” been virtually cast on a TV screen like the good days.

The PM looked tanned and relaxed, but then to be fair he would be, he is on hols (self-isolating) at his grace and favour country estate, with a heated swimming pool.

Strangely he couldn’t explain why he had travelled to his holiday home as part of the suspect pilot scheme he used to try and avoid self-isolating.

This was the last PMQs before the summer terms, there will be cocktails by the lido by 12.45 prompt.

The Labour leader was still in work mode though and said: “When it comes to creating confusion the Prime Minister is a super spreader.”

That is and always will be true, but he is probably in the safest place in the UK from the virus at the moment, though.

Only John Van-Tam, who in his own words, advocates “standing in a meadow completely on your own ad infinitum with nobody coming within three metres of you,” is less likely to contract covid, unless Theresa May is marauding across a neighbouring field.

Back in the chamber though it is voluntary for MPs to wear masks but not parliamentary staff. Go figure. This from the government who said: “We expect people to wear masks in indoor enclosed spaces.”

Only around a quarter of Tory MPs in attendance seemed to be wearing face coverings. Every Labour, SNP and Lib Dem did. Was this the perfect example of Tories not trying to protect others, even their own?

David Davis, remember his Brexit bile, said it was the 60th birthday of PMQs and celebrated it by asking a question virtually to a PM who was also joining via video link.

He wants to help working classes, using educational IA, to improve their status in life. Tech might have moved on in the last six decades, but the socio-economic barriers clearly haven’t.

As the modern world advances, you wonder how long before the PM is replaced with a hologramatic head that SPADS can simply upload his non-answers to.

I would love to have seen how many advisors were holding up cue cards today, even with them all failing to answer a question correctly, but I guess that is the point of their job. Keep the bodies buried, literally.

Later in the session the PM was asked about the need for an inquiry now into the government’s handling of the covid crisis.

His answer was actually quite amusing, he said the ‘key people are heavily occupied.’

By that I assumed he meant a health secretary with covid, himself and the chancellor in glorious isolation and the ex-health sec still packing his bags and trying to find a bedsit in Pimlico.

So we can’t have an inquiry now as we are dealing with a third wave, of his making, but we can go nightclubbing, not wear a mask anywhere and basically act like total pricks, as they have erased the laws that tried to stop us.

When the PM was eventually asked about last night’s Cummings revelations including letting 80’s year olds die – words of comfort I’m sure Captain Tom would have loved to have heard as he lapped his garden – he said: “Nothing I say can make up for the losses that people have suffered.”

Well, that’s not true, he could resign on the spot, stand up and reveal he isn’t even wearing undies below his jacket,and spend the rest of his life personally apologising to each of the families of people who died of covid.

But he won’t be doing that, by the time you read this, the sound of pinging will be replaced by the sound of champagne corks popping as the PM eyes up the female lifeguard.

Related: PMQs – ‘Johnson’s variant’ of the truth worn like a badge of honour

The Hundred: not cricket as we know it, but nothing for sceptics to fear | The Hundred

Cop who responded to Jan. 6 attack is 3rd to die by suicide

The Hundred: not cricket as we know it, but nothing for sceptics to fear | The Hundred