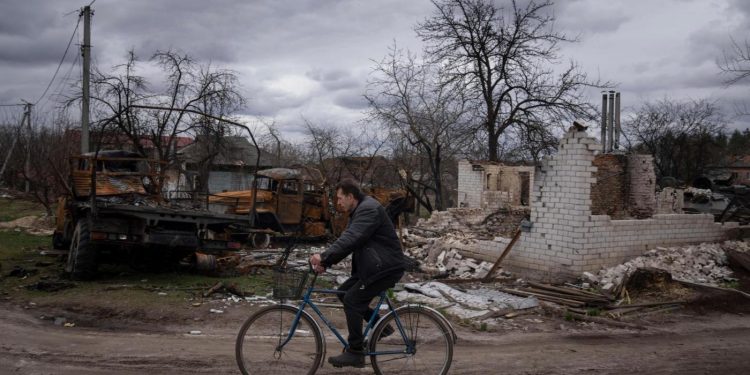 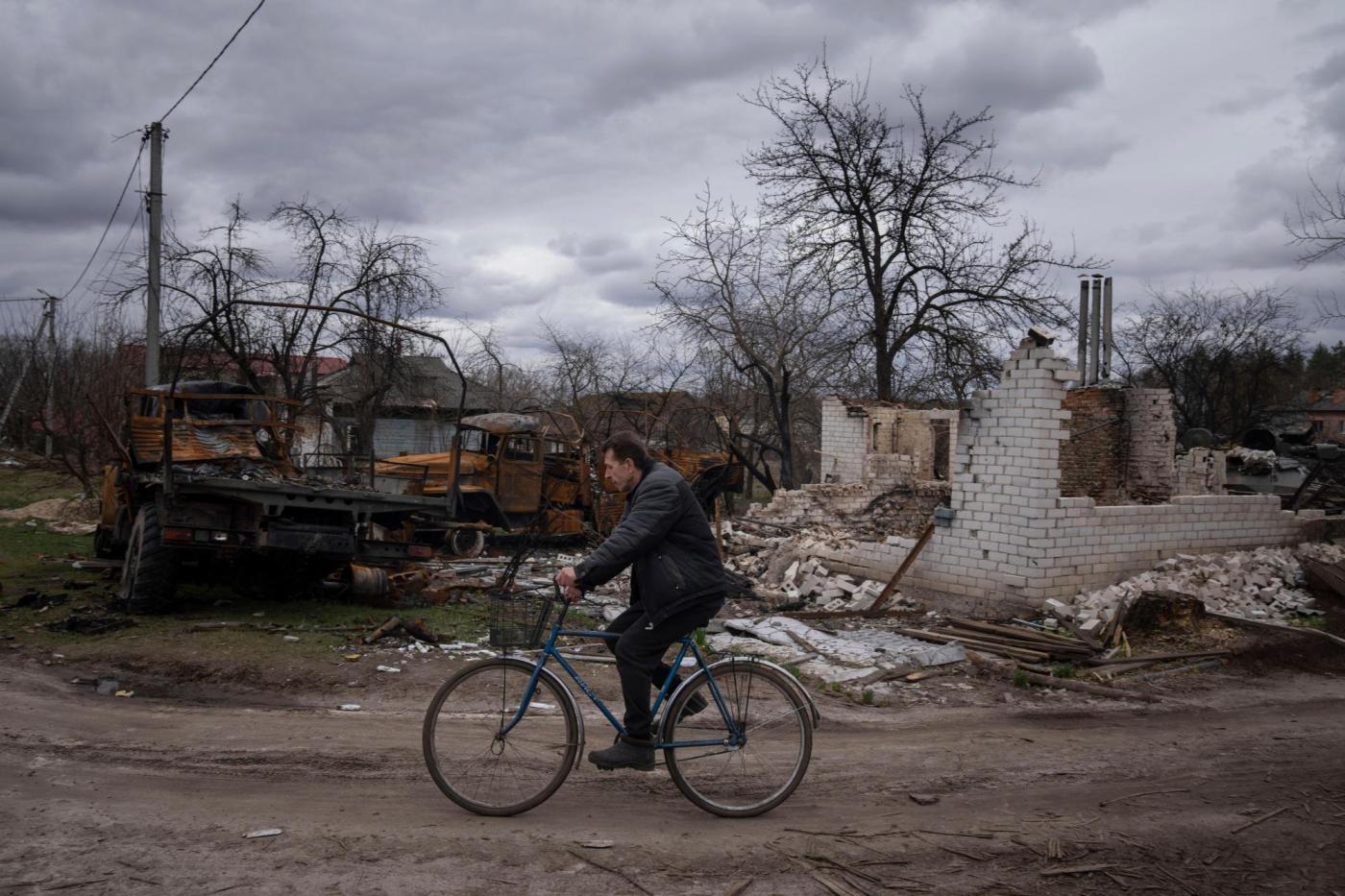 By The Associated Press

WARSAW, Poland – A top aide to Poland’s President Andrzej Duda says Duda and the presidents of the three Baltic nations have arrived in Ukraine, ahead of talks about material aid for country invaded by Russia.

Pawel Szrot, chief of Duda’s staff, said Wednesday that Duda, “together with the presidents of Lithuania, Latvia and Estonia, is currently on the territory of Ukraine. They are traveling to Kyiv to meet with President Volodymyr Zelenskyy.”

For security reasons he gave no details.

These countries, all of which border Russia or its exclave of Kaliningrad, have been providing Ukraine with weapons that they call “defensive.”

Pictures of the four presidents getting on a train and then gathered around a table as they travel, have been posted on their social media.

KEY DEVELOPMENTS IN THE RUSSIA-UKRAINE WAR:

— A look at Russia’s military objectives and challenges it faces

— ‘It’s not the end’: The children who survived Bucha’s horror

— Go to https://apnews.com/hub/russia-ukraine for more coverage

Russia says more than 1,000 Ukrainian troops have surrendered in the besieged southeastern port of Mariupol.

Russian forces moved on Mariupol in late February and units in the city have been running low on supplies.

Ukrainian presidential adviser Oleksiy Arestovych did not comment on the alleged mass surrender, but said in a post on Twitter that elements of the 36th Marine Brigade had managed to link up with other Ukrainian forces in the city as a result of a “risky maneuver.”

ROME — Pope Francis says his contention shortly after he became pontiff in 2013 that a third world war “in pieces” was afflicting the globe is ever more actual. Francis writes in an essay published on Wednesday in Italian daily Corriere della Sera that he would never a thought a year ago, while on a pilgrimage in Iraq, that war would be raging in Europe.

Francis wrote that the many wars being fought throughout the world seem far away until “almost unexpectedly, war explodes near us. Ukraine was attacked and invaded.”

The pope also lamented that people’s memories are short. “Yes, because if we had a memory, we would recall what our grandparents and our parents recounted to us, and we would feel the need for peace like our lungs need oxygen.”

Francis called war “a cancer that feeds itself by engulfing everything.” He decried that women, children and older adults are “forced to live in the belly of the earth to escape bombs.”

Francis said that the way to rip out “hate from the heart” is through “dialogue, negotiations, listening, diplomatic ability and creativity, long-ranged policies capable of constructing a new system of co-existence that isn’t any longer based on weapons, on deterrence.”

WASHINGTON — The United States and its allies are pushing ahead with sanctions aimed at forcing Vladimir Putin to spend Russia’s money propping up its economy rather than sustaining its “war machine” for the fight in Ukraine, a top Treasury Department official said Tuesday.

Deputy Treasury Secretary Wally Adeyemo, one of the main U.S. coordinators on the Russian sanctions strategy, said in an interview with The Associated Press that the goal is to make Russia “less able to project power in the future.”

On the same day that inflation notched its steepest increase in decades, Adeyemo said reducing supply chain backlogs and managing the pandemic are key to bringing down soaring prices that he related to the ongoing land war in Ukraine, which has contributed to rising energy costs.

Adeyemo discussed the next steps the U.S. and its allies will take to inflict financial pain on Russia — and the complications the war has on rising costs to Americans back home.

Adeyemo said the U.S. and its allies will next target the supply chains that contribute to the construction of Russia’s war machine, which includes “everything from looking at ways to go after the military devices that have been built to use not only in Ukraine, but to project power elsewhere.”

KYIV, Ukraine — More than 720 people have been killed in Bucha and other Kyiv suburbs that were occupied by Russian troops and more than 200 are considered missing, the Interior Ministry said early Wednesday.

In Bucha alone, Mayor Anatoliy Fedoruk said 403 bodies had been found and the toll could rise as minesweepers comb the area.

Ukraine’s prosecutor-general’s office said Tuesday it was also looking into events in the Brovary district, which lies to the northeast.

Authorities said the bodies of six civilians were found with gunshot wounds in a basement in the village of Shevchenkove and Russian forces are believed to be responsible.

Vladimir Putin vowed Tuesday that Russia’s bloody offensive in Ukraine would continue until its goals are fulfilled and insisted the campaign was going as planned, despite a major withdrawal in the face of stiff Ukrainian opposition and significant losses.

WASHINGTON — The Biden administration is preparing yet another, more diverse, package of military support possibly totaling $750 million to be announced in coming days, a senior U.S. defense official said Tuesday.

The official spoke on condition of anonymity to discuss plans not yet publicly announced.

The additional aid is a sign that the administration intends to continue expanding its support for Ukraine’s war effort.

Delivery is due to be completed this week of $800 million in military assistance approved by President Joe Biden just one month ago.

KYIV, Ukraine — Ukrainian officials say fugitive Ukrainian oligarch Viktor Medvedchuk, who is both the former leader of a pro-Russian opposition party and a close associate of Russian leader Vladimir Putin, has been detained in a special operation carried out by the country’s SBU secret service.

Ivan Bakanov, the head of Ukraine’s national security agency, said on the agency’s Telegram channel that Medvedchuk had been detained.

The statement came shortly after Zelenskyy posted on social media a photo of Medvedchuk sitting in handcuffs and wearing a camouflage uniform with a Ukrainian flag patch.

Medvedchuk was the former leader of the pro-Russian party Opposition Platform – For Life. He was being held under house arrest before the war began and disappeared shortly after hostilities broke out.

Putin is the godfather to Medvedchuk’s youngest daughter.

KYIV, Ukraine — Ukrainian President Volodymyr Zelenskyy appealed to the world Tuesday to respond to Russia’s use of a poisonous substance in Mariupol.

“Given the repeated threats by Russian propagandists to use chemical weapons against the Mariupol defenders and given the repeated use by the Russian army, for example, of phosphorus munitions in Ukraine, the world must react now,” Zelenskyy said in his nightly video address to the nation Tuesday.

Phosphorus munitions cause horrendous burns but are not classed as chemical weapons.

Zelenskyy said experts were still trying to determine what had been used in Mariupol.

Zelenskyy said in addition to the killings in Bucha, more evidence was appearing of the “inhuman cruelty” of Russian soldiers toward women and children in other Kyiv suburbs and other towns in the north and east.