Portable, Picturesque but Not Quite Perfect 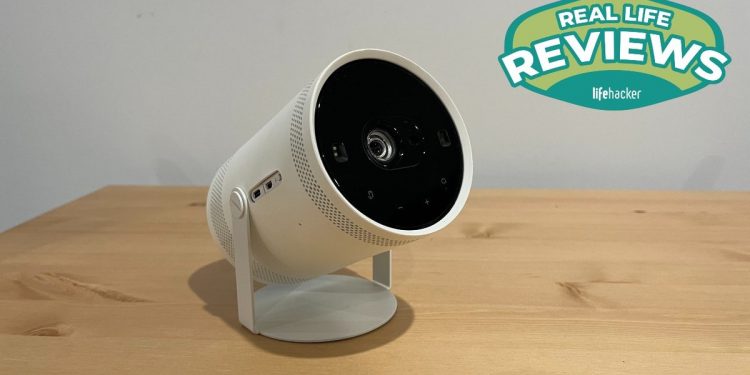 Samsung’s Freestyle Projector is an incredible little unit. For so long projectors have been seen as big and bulky bricks that need to be wall-mounted in your house. That or they’re cheap pocket projectors that can’t hold a candle to the quality of a premium screen. The Freestyle puts an end to both of those problems.

Revealed at CES in 2022, the Samsung Freestyle is an attempt to create a true portable projector that doesn’t sacrifice quality. That’s pretty much what it does along with a bunch of neat but kind of unnecessary things like acting as a smart speaker or a lamp.

There are a lot of things the Samsung Freestyle does right, but there are still a few improvements that could be made to make it worthy of the price.

Before I project my experience upon you, let’s look at some key specs.

There are so many good things about the Samsung Freestyle, the main of which is how easy it is to just plug in and go.

Within 10 minutes of opening the Samsung Freestyle, I had it set up and ready to use. Samsung makes this easy by powering the Freestyle with a standard USB-C cable. Plus the projector’s small size and portability make it easy to set up virtually anywhere.

This includes locations that may not have access to a power point, like when camping or in the backyard, as long as you bring a compatible power bank.

Apart from power, you don’t need to plug anything else into the Freestyle. It comes equipped with a 360-degree speaker and has an in-built smart system chock full of streaming apps. It does have a micro HDMI port if you want to plug an external media source in as well.

The portability and flexibility of the Samsung Freestyle is easily its greatest asset. The projector is small and light enough to set up basically anywhere in your house and the 180-degree tilt makes it easy to point it at any wall (or even the ceiling!) and start watching.

I found a multitude of different ways to use the Freestyle while I was testing it. I could use it as a small TV screen while eating dinner. I projected it onto the roof in my room when I wanted to watch something before bed. I even hosted a couple of home movie nights and made full use of the Freestyle’s 100-inch screen setting.

The design of the projector itself is also nice. The Freestyle’s cylindrical white frame is elegant and ditches the eye-sore bulky box designs of other projectors. Even in its ambient lamp mode, it makes a neat addition to any room.

The projector uses a standard TV remote that is pretty straightforward to use. Not much to say here except don’t point it at your Samsung television or it will try and join the party.

Despite the Freestyle’s size it doesn’t sacrifice quality. I was consistently awed at the incredible picture such a small device could project.

Colours appeared bright and vibrant, pictures were clear cut and defined and action was smooth thanks to a quick refresh rate. It’s easily one of the better projectors I’ve seen.

The autofocusing and auto levelling functions of the Freestyle are also quite impressive. Using the projector is as simple as pointing it at a wall and allowing the internal systems to do the rest. The auto-levelling mechanisms are pretty spot on, but unfortunately it didn’t get it perfect every time.

As for sound, I found the inbuilt speaker system to be perfectly adequate for my viewing needs. The Freestyle can’t compete with something like a surround sound system or soundbar, but you can wirelessly pair the projector to another external speaker via Bluetooth if you want that added boom.

In terms of content, the inbuilt Samsung OS offers plenty of streaming options, so it’s hard to run out of things to watch. Not only are the regulars like Netflix, Stan and Disney+ an option but Samsung also offers a bunch of free streaming channels.

Personally, I found the notion of just packing up the projector without any need for an external media box or disc drive incredibly satisfying and just added to the Freestyle’s portability.

The device also offers screen mirroring functions if you want to project something from your phone or laptop. It can even be used to act as an external monitor if you’re in need of an extra screen while on the move.

What’s not so good

That leads me to some of the cons of the Samsung Freestyle. While I was impressed by many things with this portable projector, it could use work in a number of areas.

The auto levelling and focusing is one of them. More than once I found the picture displayed on my wall to be just slightly off centre and no manner of moving or adjusting the projector could re-align it.

The Freestyle does offer manual keystone and levelling options in the settings and this is easy enough to play around with. But digging through the settings menu every time you move the projector to a new spot isn’t exactly ideal.

The cradle for the projector, while flexible, also had some issues with holding the projector steady at all of its 180-degree points. Multiple times I found the projector drooping in certain positions and had to manually readjust it. A more rigid cradle is something Samsung might want to implement in future models.

Easily my biggest gripe with the Samsung Freestyle was that its hardware and software didn’t communicate very well. The interface itself is fine and easy enough to use, but I was constantly met with slow loading speeds and a sluggish response rate.

More than once the Samsung Freestyle crashed completely in the middle of a movie, sometimes multiple times in the same session. Other times it took an age for apps to boot and actions would frequently lag after I’d input them.

This is something that I’m sure can be fixed in future models with better hardware and more processing power, but for now it remains a sticking point in an otherwise smooth-running operation.

Some other things worth mentioning include the battery life. For those wanting to use the Freestyle remotely with an external battery, be aware that this thing chews through juice quickly.

You’ll want the biggest battery possible and potentially also a backup battery if you want any hope of getting through a movie session that’s over 2 hours.

The Freestyle is also bright at 500 lumens but it will never match the backlight of a television. This means it does struggle with contrast in dark scenes or if you’re watching something in a brightly lit room.

If you’re planning a session with the Freestyle, try and operate it in the darkest environment possible.

This is the first iteration of the Freestyle so it was inevitable that some kinks would need to be ironed out. But for the most part, I think Samsung has nailed what it was trying to achieve here which is to provide a premium picture in a portable projector.

At $1299 it costs far less than other high-end projectors on the market, but it’s not exactly a cheap purchase either. It’s probably worth considering what you would use a projector like this for instead of a traditional TV. If you want something that is portable, easy to set up and will look amazing in any room of your house, this device is pretty much made for you. But if a consistently bright and focused picture with strong hardware to back it up is what you’re after, maybe consider a TV.

While the Samsung Freestyle isn’t perfect it reintroduced me to the magic of a home movie night and that was worth suffering its drawbacks for.