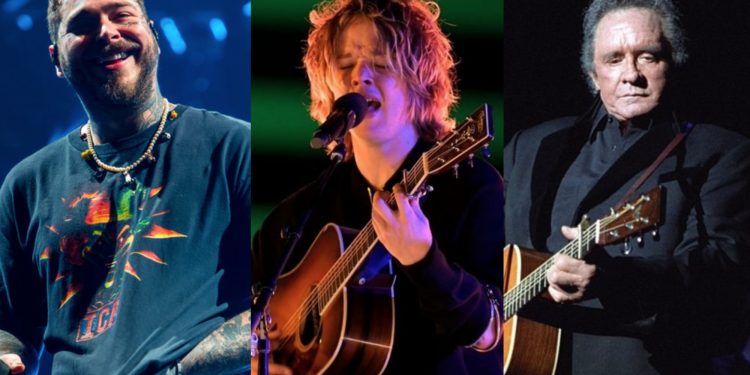 
Post Malone and Billy Strings have teamed up for a cover of Johnny Cash’s ‘Cocaine Blues’ – watch it below.

On Wednesday night (April 13), Strings – a rising star on the bluegrass scene – played a show at The Observatory in Santa Ana, California.

During his second set, he invited Malone to grab a guitar and join him on stage for a plucky cover of Cash’s 1968 version of ‘Cocaine Blues’. Cash famously performed the song at his 1968 Folsom Prison concert.

“I saw this guy lurking around backstage and figured we gotta drag him up here to fuckin’ sing for us,” Strings told the crowd.

Check out the pair’s cover below:

Earlier this year, Malone shared some details of his upcoming album, saying he doesn’t want to compromise on the new record.

‘Twelve Carat Toothache’ will be the follow-up to 2019’s ‘Hollywood’s Bleeding’ and is expected to be released this year.

Speaking to BillboardPost revealed that the album would be around 45 minutes, going against the current trend of releasing long records to capitalise on streaming figures.

“Trying to shove 20 to 25 songs, it doesn’t work,” he said. “Talking to the label [it’s like]‘Oh, if you have less songs, you’re not going to stream as much,’ but the whole thing is that you don’t want to compromise your art and your gut vibe on anything.

“I’ve made a lot of compromises, especially musically, but now I don’t feel like I want to anymore. I don’t need a Number One; that doesn’t matter to me no more, and at a point, it did.”

Since the release of ‘Hollywood’s Bleeding’, the rapper and singer has released the standalone single ‘Motley Crew’, as well as contributing to the likes of Ozzy Osbourne’s ‘It’s A Raid’, a remix of Saweetie’s ‘Tap In’, Big Sean‘s ‘Wolves’ and Ty Dolla $ign‘s ‘Spicy’.

Meanwhile, Malone has been added to the line-up for Roskilde 2022 alongside other new additions The Strokes, Megan Thee Stallion and The Smile.

The Danish festival returns from June 25-July 2 this year after both its 2020 and 2021 editions were cancelled due to the COVID pandemic.

How do I find My Router’s IP Address?