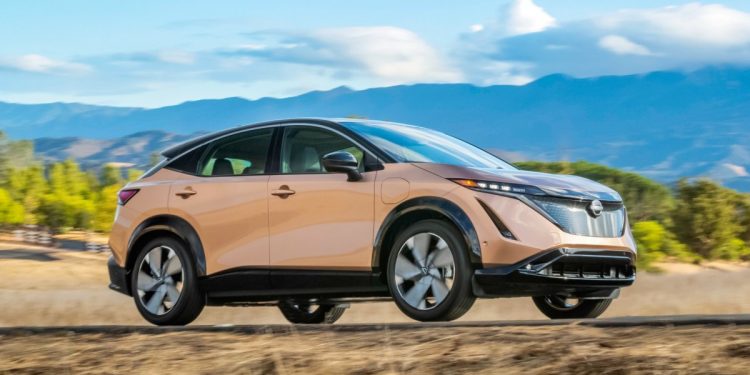 
You can’t buy the 2023 Nissan Ariya just yet. It arrives in the U.S. this fall, as a 2023 model. Nissan also hasn’t announced an MSRP, but given its size, level of refinement, power options (which we’ll get into below), and the benchmark set by rivals, you can bet it’ll run $40–$50,000 for most versions. We’ll reserve judgement on precisely how it stacks up to competitors in terms of the driving experience, because we only got a few brief moments on the test track just outside of Madrid, Spain, not a genuine, multi-day drive with stop-and-go traffic, long highway runs, grocery stops, etc. But here are three initial takeaways from the experience with Nissan’s first upmarket EV.

If you’ve never driven an electric car, you’ve probably watched a few dozen YouTube videos of folks burning rubber in their Teslas set to Ludicrous Mode. Those aren’t real-world scenarios for everyday drivers—just as 0–60 times below 4–5 seconds are irrelevant. What matters is being able to accelerate and merge onto a six-lane highway, how predictable that feels, and whether or not the car can get out of its own way.

We tested the “meekest” config. of all possible Ariyas. Let’s explain. You can order your Ariya as a single motor front-wheel drive crossover with 66 or 91 kWh battery, or you can get AWD with the same two battery options. We tested the 66 kWh FWD version with a “mere” 221 lb. ft. of torque—and it’s plenty quick. (The AWD 91 kWh model will deliver 389 lb. ft. when it drops late in 2022.) Nissan hasn’t given official 0–60mph times yet, but we’d guess even this FWD Ariya hits 60mph in right around six seconds flat. More importantly, the Ariya scoots really swiftly from 30–70mph, and what’s really eye-opening is how it handles.

Engineers here say they learned a great deal from the more economically priced Leaf. What they partly focused on is steering acuity. In any of three modes (Eco, Normal, and Sport), you can feel the Ariya’s steering adjust, from light but precise to more heavily weighted and accurate. We wouldn’t call the steering as communicative as what you’d find behind the wheel of a Lamborghini, but for the segment it’s very well calibrated. Slot the car into Sport mode and you can even get a little bit of tail wag before the stability control bites off the shenanigans.

We’ve tested a LOT of EVs in this mid-size price range and the Nissan is punching toward the top of the class (at least initially), especially for balancing that sense of stability at speed against harshness. Some crossover EVs are sportier, but they’re sacrificing longer mile comfort in the process. The Ariya drives placidly if you want to tool along, but progressively handles harder driving styles without fuss.

There’s a mantra that every EV maker trots out these days: They’re delivering “full-size-car” space in a mid-size (or smaller) package. Meh.

If you were betting on that, you’d take the under.

But the Ariya is legitimately big inside. A six-footer can set up the driver’s seat for easy reach and comfort, then hop back into the second row and not scrape their knees or head. That’s a giant fail in a Tesla Model 3—and not so easy in other models in this segment either. Again, we want official interior numbers for this hatch, but it’s plenty spacious, with (we’d guesstimate) cargo room in the hatch space to rival Nissan’s own Pathfinder.

Nissan’s deploying haptic buttons rather than physical dials and switches, and these are brightly backlit with LEDs. While a lot of EV makers have decided that every control should live in a center display touchscreen, Nissan wisely hasn’t gone there. There are distinct heat/cooling haptic buttons; fan speed can be manually adjusted; there’s an intuitive allotment of steering wheel toggles for inputs like volume/station/source for entertainment, which you can meter in cruise control; and Nissan’s Pro Pilot Assist 2.0 (a suite of assisted driving technology that includes stopping/starting in traffic, lane keeping, etc.).

Nissan’s new design direction is also lower-bling than you see in the disco-ball competition. While the Ariya has gone deeper on exterior use of LEDs, the angularity of the Ariya may not work for everyone—nor will the rose gold/bronze hue. We finally got to see the car in a more muted blackish gray and, in that color (and likely others) it feels less future-wow and a lot more mainstream tech.

Inside, these quarters are simply richer and less plasticky than you get with many rivals. Nissan beautifully executed passive lighting. Panels that mirror 17th-century Japanese paper lanterns grace the doors and the toe area of the floors, and soft rather than harsh LEDs shine through these seemingly inlaid screens. It gives the cabin a decidedly upscale vibe that’s especially impressive.

Nissan also demonstrated its next-generation AWD for us. The idea is fairly logical, but not obvious until you zip around a test track. Basically, electric motors vs. gasoline ones can deliver 100 percent torque nearly instantaneously. That means engineers can drive any wheel of the car. Say, the outside ones as you screech around the apex of a corner, while simultaneously braking the wheels on the opposite side of the car. (Or applying brakes and “gas” meted out in microsecond doses, to constantly add stability.) Bombing around a few tight turns without the system felt decidedly reckless. Like we might spin right off the track. Taking the same turns with e-4orce utterly transformed the level of grip. It added what felt like 20mph more capability to the car. This is the future of sporty driving, EV-style, and it’ll come on AWD versions of the Ariya.

Our preproduction tester wasn’t equipped with voice control, but Nissan says the Ariya will debut with Amazon Alexa to talk to your Nissan for Alexa-like activations (like ordering a Grubhub meal or making sure your A/C is on at home). In addition, Nissan’s own voice management system will pause when you’re requesting something car-related. For example, lowering all four windows of the vehicle, changing audio inputs, or making a call. Naturally, Apple CarPlay and Android Auto will come gratis, but for lots of functions, Alexa may form a kind of bridge between those two tech platforms.