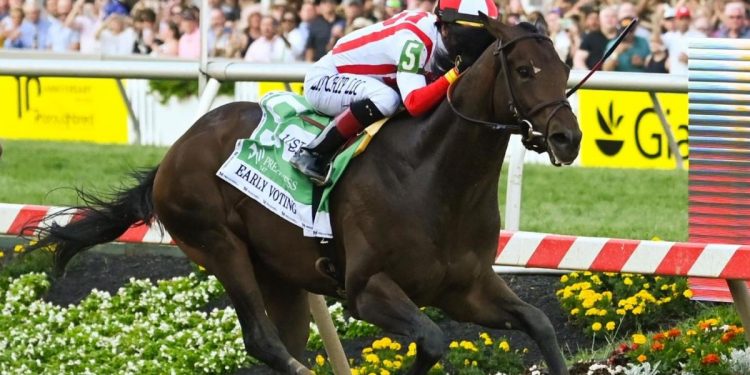 Early Voting, at 5-1 odds, powered through near-record heat to win the 147th Preakness Stakes by a length and a half. Jockey Jose Ortiz rode the horse to victory and Chad Brown is the winning trainer. The temperature was just under 90 degrees during the race at Baltimore’s Pimlico Race Course, making Saturday’s running one of the hottest in Preakness history.

The favorite, Epicenter (7-5), and Creative Minister (10-1) finished second and third, respectively. Epicenter, which placed second in the Kentucky Derby, has now finished as runner-up in each of the first two legs of the Triple Crown.

Armagnac (17-1) led the race early with Early Voting just behind, but the latter pulled ahead with a quarter mile left to win despite a late surge from Epicenter. Here’s the full race:

Early Voting’s victory was special on multiple fronts for owner Seth Klarman, whose horse Cloud Computing won the 2017 Preakness. The billionaire hedge fund manager turned 65 on race day, and he grew up a mere three blocks from Pimlico Race Course.

Klarman and Brown were overcome with emotion after Early Voting crossed the finish line.

“Cloud Computing was a once-in-a-lifetime,” Klarman said after the race, “and now I have a second-in-a-lifetime.”

Ortiz, who collected his first Preakness win, said it was Klarman’s birthday gift after the race.

Rich Strike, which shockingly won the Kentucky Derby with 80-1 odds, did not get chance for a Triple Crown by skipping Saturday’s race. Owner Rick Dawson announced on May 12 he pulled the horse out for rest and recovery purposes. Rich Strike is next expected to compete in the Belmont Stakes on June 11.