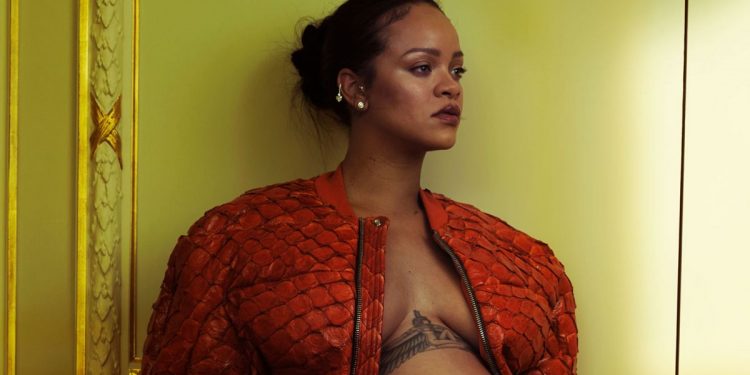 
Rihanna and boyfriend A$AP Rocky announced the pregnancy back in January. She has since been changing the game with her maternity looks

Heavily pregnant Rihanna was the ultimate ‘fashion killa’ as she appeared on the front cover of Vogue.

The Fenty businesswoman took to Instagram to give fans a peek at her showstopping ensemble for the fashion publication.

“Our lil fashion killa on da cover of VOGUE!!” she captioned the picture.

The billionaire and singer wore a red Alaïa bodysuit, gloves, and shoes. She accessorized her look with Chopard earrings.

Friends and fans couldn’t get over how she rocks every pregnancy look and took to the comment section to compliment her.

She has been redefining maternity looks
(

RiRi showcased many high fashion looks for the photoshoot, which had her growing baby bump the focus of the shoot.

The Umbrella singing has been changing the game with her iconic maternity looks, which include a lot of lace, mesh, and belly-baring tops.

Speaking to Vogue, she said: “I’m hoping that we were able to redefine what’s considered ‘decent’ for pregnant women.

The star announced her pregnancy in January
(

“My body is doing incredible things right now, and I’m not going to be ashamed of that.

“This time should feel celebratory. Because why should you be hiding your pregnancy?”

Rihanna and her boyfriend A$AP Rocky announced the pregnancy news with a photoshoot in Harlem in January this year.

The Stay singer began dating rapper A$AP Rocky, real name Rakim Mayers, in 2020, but the two have known each other for years.

She even appeared in the rapper’s 2013 hit song Fashion Killa, which she referenced in her caption.

Rihanna previously opened up about her changing body and how she has been using her pregnancy as the opportunity to try out new clothing.

She said: “My boobs have been growing by the week.”

She added: “When women get pregnant, society tends to make it feel like you hide, hide your sexy, and that you’re not sexy right now (but) you’ll get back there and I don’t believe in that sh*t.”

“So I’m trying stuff that I might not have even had the confidence to try before I was pregnant. The strappiest, the thinnest and the more cut-outs the better for me.”

Vogue’s May 2022 issue is available on newsstands nationwide on April 26th.

Rihanna bares her baby bump in crop top as she heads out for date night with ASAP Rocky
Tags: awebodysuitcoverfanslaceleavesPregnantRedRihannaVogue
Previous Post