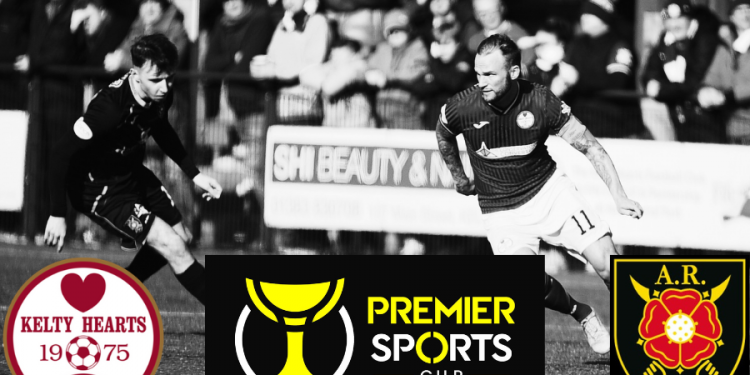 On a frustrating afternoon for the New Central Park side, Ayrton Sonkur’s scrambled opener from close range with 10 minutes to go gave the Coatbridge team the lead, before Charlie Reilly’s penalty five minutes later sealed their victory.

Although the hosts had had the better opportunities prior to Albion’s opener, with Alfredo Agyeman’s superb first half effort that was pushed onto the bar by goalkeeper, Jack Leighfield, the pick of them, they struggled to unpick a well-organised visiting side.

Last season’s League Two champions were nowhere near their fluent best against a side they were unbeaten against in four meetings last term, winning three of the four, scoring 12 goals whilst conceding only two in the process.

Both teams were seeking their first points in this season’s competition, with Kelty having been unfortunate to lose to a last-minute goal to Inverness Caledonian Thistle last Saturday, and Albion falling at home to Livingston, and then Cove Rangers midweek.

But it was the Wee Rovers who got off the mark with a superb victory, which leaves Kelty still seeking their first goal in competitive play under Potter’s stewardship, as well as their first point.

Nathan Austin was responsible for half of those Kelty goals against Albion last season, returned to the starting line-up was the one alteration Potter made from last week, with Kallum Higginbotham missing out altogether.

There was also a welcome return to the bench for last season’s PFA Scotland League Two Player of the Year, Joe Cardle, who had been troubled by a hip problem throughout pre-season, whilst joining him was Dougie Hill.

The centre back, who had seemed set to retire following Kelty’s title triumph, has been back in at the club assisting Potter, and, like last week, was named amongst the substitutes.

Agyeman did brilliant work to burst beyond his marker on the right hand side and into the box, pulling the ball back from the goal-line for Robbie McNab.

Although McNab’s first-time effort was flawless, finding the far corner of the net, Agyeman didn’t manage to keep the ball from going out of play, and the goal was chalked off.

Agyeman started proceedings in lively fashion but the visitors served notice of their threat, with Kyle Fleming denied from the edge of the area by a fine, diving save by Darren Jamieson, before Sonkur was on hand to block from Agyeman at the other end.

Albion’s defence were doing a good job of denying their opponents much in the way of a route to goal, but Lewis Martin did come close, bringing out a fine save from Jack Leighfield, before Tam O’Ware nodded Tidser’s resultant corner over.

Agyeman, though, had the half’s best moment, matched by the intervention of Rovers keeper Leighfield.

Picking the ball up on the right, he had Martin racing forward in support. But, after assessing his options, he opted to smash a rasping effort towards goal from just over 20 yards.

It looked as though it was going to burst the net until Leighfield, with a superb reach, pushed the ball onto the bar.

Kelty were upping the ante, with Jamie Barjonas seeing a shot from distance held by Leighfield, before he set up Agyeman – having initially had another effort blocked – inside the area, but the forward blazed his effort wide from 12 yards.

A low-key start to the second half suddenly burst into life 11 minutes into it – and Agyeman was again at the heart of the action.

Barjonas showed lovely feet to skip away from any Albion shirts in his vicinity and into space before slipping his team-mate in, whose effort across goal looked in all the way, only for the far post to deny him.

From the loose ball, Austin fired an effort over from the edge of the area, before Potter introduced Cardle for his first minutes of the season, in place of Thomas Reilly.

Still, though, Albion continued to hold their own, but as the clock ticked into the 70th minute, there was an opportunity for Austin.

After controlling the ball well on his chest, and turning away from substitute James McGowan, who also fouled him in the process, the hitman raced away into the penalty area, but fired high and wide of the near post.

Amaury Testa, another Rovers substitute, was played in by Charlie Reilly after Cardle untidily lost possession in midfield, but he couldn’t generate the power to trouble Jamieson with his shot, before the visitors stunned Kelty with the opener.

From a Reilly free-kick, the ball was headed back across goal and, from close range, Sonkur scrambled the ball home.

Then, with five minutes to go, the shock win for the Coatbridge side was complete when Reilly, after a foul on Kieran Dolan inside the box, slotted home a penalty to leave Kelty with two defeats from two in their Premier Sports Cup group ahead of their third match in the section, at Cove Rangers, on Tuesday evening.

The result leaves Kelty bottom of Group G, with Inverness top of the section with six points, just ahead of Livingston, who won at Cove Rangers.

Elsewhere, in Group C, Dunfermline’s qualification prospects suffered a blow as they fell to defeat at Ross County.

A second half header from Jordy Hiwula-Mayifui, midway through the second half, gave the Premiership hosts victory.

The Pars, with one match left, remain top on six points, one ahead of both County and Alloa – 4-1 winners at Buckie Thistle – who have played one game less.

In Group E, Cowdenbeath remain winless, and without a point, after St Mirren earned a 2-0 win.