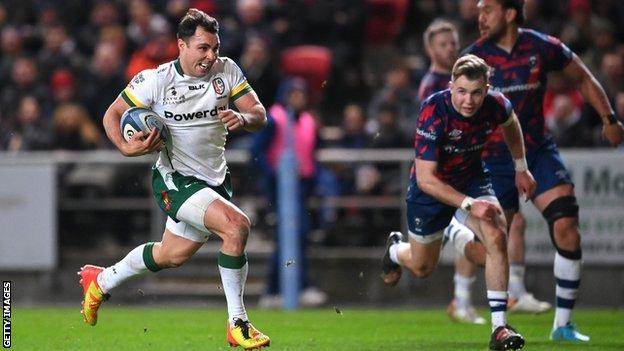 Bristol winger Siva Naulago, who was later sent off, and Tom Whiteley scored either side of a Nick Phipps try to give the hosts a 15-10 interval lead.

Both teams landed early penalties before Whiteley and Harry Thacker combined well after a line-out for the first try of the match – with Whiteley running the ball into the corner and crossing the line.

Scrum-half Phipps dived over from close range to score a first try for the Exiles and Jackson made no mistake with the conversion to give the away side the lead, before Naulago hit back to restore the hosts’ advantage.

Irish were reduced to 14 men shortly before half-time when Argentine Agustin Creevy was shown a yellow card for killing the ball in a try-scoring opportunity as Bristol pushed to extend their lead.

The Exiles then cut the gap to two points when Jackson scored his second penalty of the match.

And the hosts’ evening became even more challenging when Naulago was sent off for a high tackle just before the hour mark.

Loader then put the Exiles seemingly out of sight as he raced into the corner to make it 32-15 and secure the bonus point before Jackson added their fifth try.

When replacement Tom Pearson crossed, Irish had scored 39 unanswered points, before Strang sparked a late flurry of tries from the Bristol bench.

His first try for the club was followed by another from Challenger, and Kerr scored from the last play in an entertaining end to a dramatic match.

Irish move up to sixth in the table, level with fifth-placed Northampton Saints on 40 points, while Bristol stay 10th.

“We started the game relatively well. We gave away some soft tries and the red card doesn’t help.

“We’ve got a core group of players who are missing and the guys who came on did a good job.”

“We knew we had this performance in us, but we didn’t fire at Gloucester last week and it’s still only five points from two matches in the West Country.

“We were lucky not to be further behind at the interval but we then showed what we are capable of.

“We scored 39 points then they scored 19, so it’s a credit to the attack of both sides, but we will have to review why we conceded those late points as it may cost us in future games.”