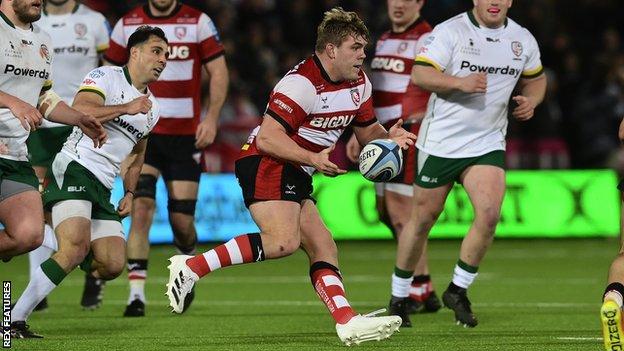 
Gloucester moved up to second in the Premiership with a hard-fought victory over London Irish.

Gloucester prop Ruan Ackermann scored the only try of the first half, edging over from a driving maul to give the Cherry and Whites a 7-0 half-time lead.

Gloucester’s Adam Hastings kicked a late penalty, before Ackermann got his second to wrap up the win.

This was a meeting of two of the league’s in-form teams, but Kingsholm has proved a difficult ground for London Irish over the years. Their last win there came in 2013, one of only two during the Premiership era.

Irish found themselves within sight of the try-line three times in the opening stages as they dominated. But the Gloucester defence proved a fortress, forcing Irish into errors and leaving them empty-handed.

Irish then gave away a penalty and Gloucester raced to their 10m line against the run of play. At the second attempt at a line-out, they drove forward and Ackermann went over.

Points were hard to come by during the first 40 minutes and while Irish broke up the pitch from their own 22, James Stokes was stopped in his tracks. Gloucester scrum-half Charlie Chapman was also expertly held up by Paddy Jackson over the line.

The effectiveness of the Gloucester maul was again at play as Thorley pushed them further ahead, with his second try in a week. With Irish’s defensive line pulled in and narrow, the winger had space to cross as the ball came wide.

It was the eighth time in the Gloucester 22 for Irish as they finally got points on the board. Nick Phipps spotted a gap, from which Cracknell dived over.

With one score in it, Irish were unable to claw themselves back into the game and Gloucester – aided by their replacements – made sure of a third straight league win.

Hastings kicked them 10 points clear, before Ackermann forced his way over for his fourth try of the season.

“We knew we’d have to work hard because London Irish are an on-form team, they’ve done really well lately. We came into this and I thought we were really well matched teams.

“We knew it would be very small margins and generally speaking if you work really hard and you stick together you’ll probably get those.

“I think the boys were a bit frustrated at half-time, they didn’t feel that we were quite maximising the chances we got.

“London Irish have got a good defence so we had to keep banging the door down. Nothing too strategic just keep doing what we were doing.”

“We had a tremendous amount of early pressure but you must take the opportunities, which come your way and we didn’t.

“They game is decided on fine margins but fair play to Gloucester they were able to slow down a lot of our ball and stop the flow of the game.

“They are very strong in defence and their driving maul is a very effective weapon. It’s a strong part of the game and they benefitted from it by scoring two tries tonight.

“It’s always disappointing to come away pointless but we were a little bit off in terms of control.”

How Can I Apply for a Personal Loan?