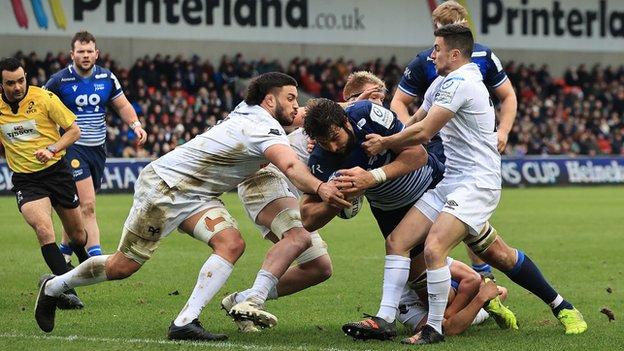 
Sale Sharks make four changes to their side for the visit of London Irish in the Premiership on Friday.

Irish make six changes to the team that sealed a last-minute 32-30 win against Saracens on Saturday.

Sale go into the match on a five-match winning streak, having beaten Northampton Saints by a single point last weekend.

They welcome back De Klerk at scrum-half, with De Jager in the second row,.

Curry returns to the side at flanker and McIntyre is recalled as prop.

The Sharks are currently seventh in the table on 43 points, two points below the sixth-placed Exiles.

The home side are undefeated in the last nine Premiership meetings between the two teams.

Munga and Simmons replace George Nott and the suspended Adam Coleman in the second row for the visitors.

Pearson returns at flanker and Tuisue will start at number eight.

Terrence Hepetema replaces Benhard Janse van Rensburg, who scored two tries in the win against Saracens, and Lucio Cinti is in for Kyle Rowe on the right wing.

Sale director of rugby Alex Sanderson: “We really feel like we’re finding some form and I’m dead chuffed with the lads.

“But we’re still nowhere near in terms of the end of the season and if you allow yourself to start to smell the roses this early you invite losing that intensity and that desire.

“You have to keep pushing to keep getting better.”

London Irish director of rugby Declan Kidney “A trip to Sale is one of the toughest away fixtures in the Premiership calendar.

“They’re heading into this fixture in really fine form, so we know we’ll need to perform at our very best on Friday night.

“It’s a fixture we’re looking forward to – these are the matches that you get into the sport for.”

Using the power of plants to filter wastewater