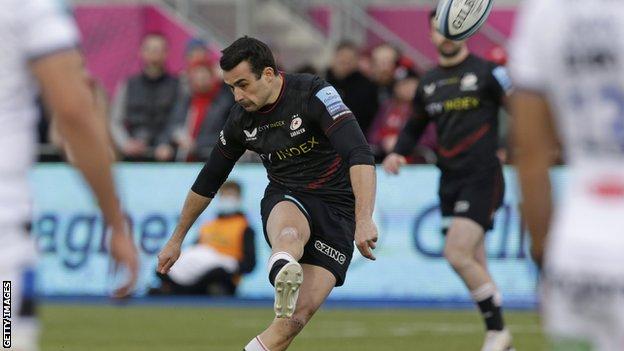 
Saracens bounced back from consecutive Premiership defeats and back up to second with a convincing win over Bath.

Tom Woolstencroft scored two tries in the space of four minutes at the end of the first half to give them an 18-3 advantage at the interval.

Alex Goode and Alex Lewington then added two more tries to secure the bonus point by the hour mark.

Lock Theo McFarland crossed for a fifth try before full-time to ensure Saracens moved back above Gloucester.

Bath, who had come into the game off the back of their first wins of the campaign against Worcester and Harlequins, could only register a penalty from former Saracens scrum-half Ben Spencer.

The bottom-placed side had enjoyed the better of the territory and chances in the opening quarter, but the closest they came was when Mike Williams was shoved out of touch inches from the try-line and Nathan Hughes was held up in the in-goal area.

But once Saracens eventually clicked into gear, there was little stopping them from coming away with the five points.

Hooker Woolstencroft scored two almost identical tries shortly before the break when he was underneath two rolling mauls from close range.

There was more pace and penetration in their second-half tries, with full-back Goode combining well on a break up the middle with flanker Ben Earl and winger Lewington registering his sixth Premiership try of the season with a sprint to the corner.

There was still time for McFarland to make the margin more emphatic as he was rewarded for a fine display of ball carrying by getting around the breakdown to finish from close range.

“I thought we created an attack really well today, but the final passes and decisions when we’re on the ball are still some areas to work on.

“But the set-piece today was a step in the right direction and we got a lot of energy from our defence in the first 30 minutes and took that momentum with us.

“Manu Vunipola I thought was very good today at fly-half and given he’s only 21, there’s going to be lots of potential to work with there going forward.

“As proud as we are of the boys currently on international duty, we’re focussing on the boys who are here at the moment and that’s why we get a performance like we did today.”

“With three or four minutes to go until half-time, it was 6-3 and we didn’t take a couple of shots at goal, we elected to kick for the corner and we had some opportunities that we didn’t take.

“We’ve got to be better at taking those and the boys are very frustrated and disappointed at the end of it all.

“Second half we gave away too many penalties and if you do that away from home, you aren’t going to win many games.

“There were a few that were pressure penalties, but others that we need to be better and not concede them.

“As pleased as we are with some of the positives, we aren’t going to gloss over what let us down today, we’ll be honest as a group.”