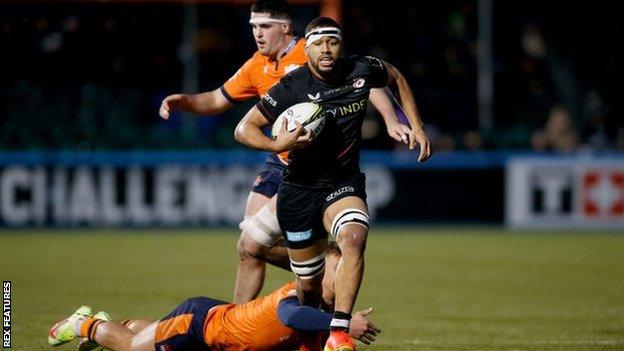 
Saracens and Gloucester make five changes each for their second v fourth Premiership match on Saturday.

Dom Morris and Rotimi Segun come into the backline.

England’s Jonny May and Santiago Carreras return on the wings for Gloucester, while Alex Seville, Charlie Chapman and Martin Atkinson also start.

Seville is the only alteration to the forward line, replacing Val Rapava-Ruskin as tight-head prop. Chapman comes in at scrum-half, Atkinson at inside centre, with Carreras on the right wing and May on the left.

England’s Mako Vunipola and Maro Itoje also start for Saracens, who beat Northampton Saints 30-6 on Sunday. Morris takes his place at inside centre and Segun starts on the right wing. England captain Owen Farrell remains out after undergoing ankle surgery.

Gloucester could leapfrog Harlequins into third in the Premiership with a win and close the gap to Saracens to two points if they secure a bonus point.

Saracens are second in the table and nine points behind league leaders Leicester Tigers.

“Gloucester are a really strong team with good fundamentals. “Their pack is strong with a good scrum, line-out and driving maul. “Their half-backs are playing well and they have an exciting back line.”They are a dangerous side. This will be our sixth home game in the league and if we can win it will leave us in a good position.”Gloucester’s attack coach Alex King:

“We know what they bring and we know what their strengths are. “They’re a good team. We aspire to be where they are and where they’ve put their foundations in over the last 10 years. “The boys have worked incredibly hard and are excited for the challenge that presents itself.”