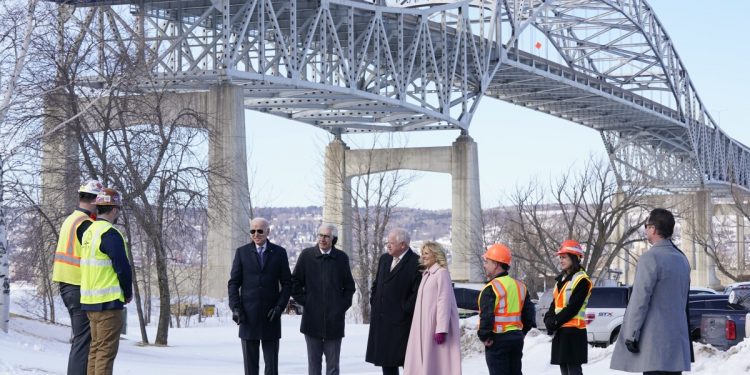 President Biden, struggling to regain his political footing as the midterm elections approach, visited the crucial state of Wisconsin on Wednesday to promote one of his top accomplishments, a bipartisan infrastructure measure that will distribute billions of dollars to fix roads, bridges and other public works.

Biden’s trip was part of a customary post-State of the Union blitz that enlisted Vice President Kamala Harris and Cabinet officials, who fanned out across the country to showcase the administration’s plans.

Along with First Lady Jill Biden, the president shook hands with workers in hard hats and neon vests near the base of the John A. Blatnik Memorial Bridge, which connects Wisconsin and Minnesota by spanning a corner of Lake Superior. The span is a perennial candidate for replacement because it’s too corroded to support heavy trucks, limiting its ability to serve as an economic lifeline for the region.

“After years of talking about infrastructure, we’re finally getting it done,” Biden said in a speech at a nearby college campus.

The White House has brushed off questions about whether Biden was rebranding his legislative proposals, previously known as “Build Back Better,” but the signs flanking the president in Wisconsin told a different story.

“Building a Better America,” they said, echoing a line from his State of the Union address.

Biden is also trying to demonstrate that his administration remains focused on domestic issues even as he confronts the Russian invasion of Ukraine, a crisis that has required close coordination with European allies.

“When the history of this era is written, Ukraine will have left Russia weaker and the rest of the world stronger,” Biden pledged.

Harris was in North Carolina, a swing state that remained out of reach for Democrats in the last election, to visit an apprentice training program for union electrical workers. She was joined by Labor Secretary Marty Walsh, one of several Cabinet officials who were traveling Wednesday.

One of the most notable trips was made by Treasury Secretary Janet L. Yellen, who rarely makes appearances with political undertones. She touched down in Chicago, where she had lunch at a Ukrainian restaurant in a show of solidarity with the besieged country and spoke at the University of Illinois’ campus in the city.

Yellen defended the administration’s economic sanctions on Russia, saying they’ve driven down the worth of the ruble and forced Moscow to close the stock market for days to limit losses.

“The objective is to keep the pain to the maximum extent possible, focused on Russia and not on the rest of us,” she said, an acknowledgment that economic ripple effects could affect Americans with higher gas prices.

Biden’s approval ratings have sagged since summer, and Republicans are poised to retake control of Congress. The White House has said Biden intends to spend more time traveling this year to promote his administration’s plans.

“He’s got to take his message above and beyond the national press, and the chattering class of the northeastern corridor,” said Cornell Belcher, a Democratic pollster. “He’s got to hit the local television networks; he’s got to get into the local paper.”

Belcher encouraged Biden to take a page from President Reagan, who promised “morning in America,” at a time when polls show voters are pessimistic about the future.

“He’s got to be cheerleader in chief,” he said. “He’s got to make Americans feel better.”

Other trips are highlighting a mix of administration successes and pending proposals.

Energy Secretary Jennifer Granholm was going to Kentucky to tour a solar farm and participate in a roundtable discussion about clean energy investments across Appalachia.

More trips are coming up.

Health and Human Services Secretary Xavier Becerra heads to Manchester, N.H., on Friday to pitch Biden’s new initiatives on mental health, along with other administration priorities on COVID-19 vaccination and health equity.