Pressure mounts for jabs for over-12s, as Delta variant tears through teenage population 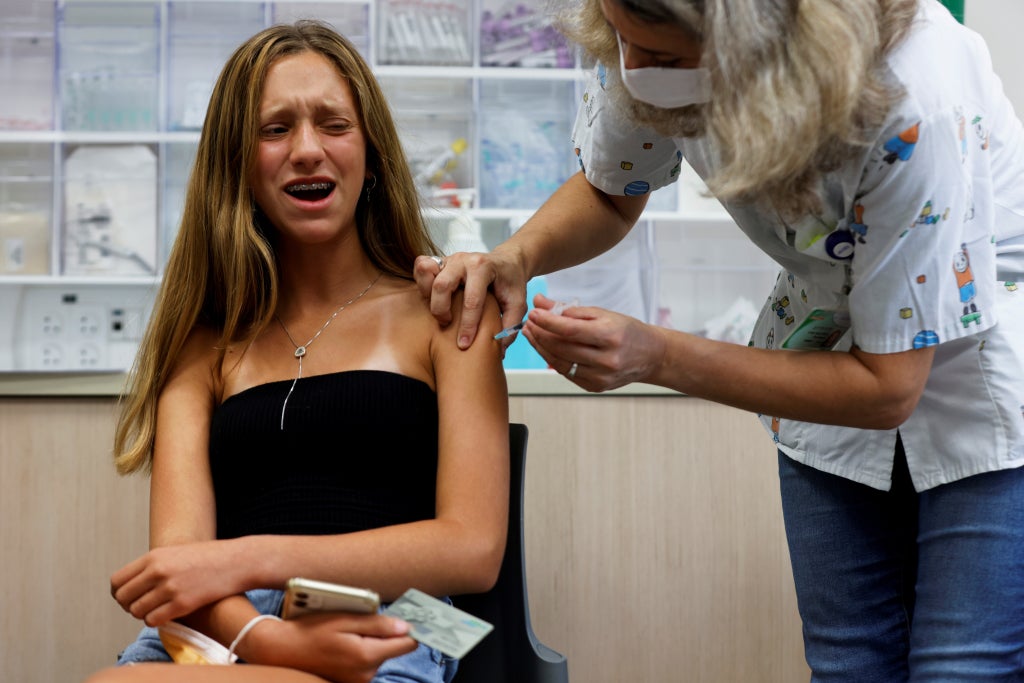 Boris Johnson is coming under mounting pressure to allow over-12s to be vaccinated against Covid, as the younger age group bears the brunt of a third wave of infections expected to reach record heights after final lockdown restrictions are lifted on Monday.

The MHRA medicine safety regulator cleared the Pfizer vaccine for use in 12-15-year-olds as long ago as 4 June and reports suggest that Joint Committee on Vaccinations and Immunisations has made a recommendation to ministers, but a decision is still awaited on extending jabs to under-18s.

With positive coronavirus cases expected to reach 100,000 a day within the next fortnight – far above the record peak of around 60,000 in the UK’s second wave in January – leading virus experts have told The Independent that without rapid action on vaccination, hundreds of thousands of young people can expect to be infected over the summer and tens of thousands to suffer the debilitating effects of long Covid.

With mRNA vaccines such as Pfizer and Moderna already given to millions of over-12s in the US, Israel and other countries with no sign of significant ill-effects, they said any health concerns were far outweighed by the risks of what one warned was a “reckless and unethical” gamble on achieving herd immunity through the mass infection of the UK’s teenagers.

The former director of immunisation at the Department of Health, David Salisbury, told The Independent that vaccination of children was desirable not only to protect their health, but to reduce the risk that they will spread Covid to parents and grandparents.

He pointed to the long-standing practice of inoculating children as young as one against rubella to protect pregnant women from the disease.

“If young people are indeed contributing to transmission, then they do have a responsibility both to their own health and to the health of other people,” said Professor Salisbury.

“Subject to assurance about the vaccine safety – which is the role of the regulator – I think they should be included in the vaccine programme.”

Given chief medical officer Chris Whitty’s warning earlier this week that Covid hospitalisations are doubling every three weeks and could hit “scary numbers”, there is growing concern over the impact on younger age-groups.

These groups are currently thought to be driving the spread of the disease and have no protection from vaccines, or only a limited protection in over-18s who have had one jab, estimated to be only around 30 per cent effective in preventing serious illness from the Delta variant.

Figures released by the Office for National Statistics this month showed that 34,000 young people aged 2-16 have reported suffering long Covid effects of headache, extreme fatigue, insomnia and cold-like symptoms for 12 or more weeks after their initial infection – which in many cases was mild – and 13,000 for a year or more.

Epidemiologist Deepti Gurdasani of Queen Mary University London told The Independent: “We need to start offering vaccines to the age groups where most of the transmission is happening – the adolescents and young adults – because we cannot bring this under control without that.

“Those groups do suffer severe impact from Covid. They may not die or get hospitalised as often, but many of them do get long-term illness and get disabled.”

Dr Gurdasani – a driving force behind the Lancet letter signed by 1,200 medics and scientists, denouncing the big-bang removal of lockdown restrictions – said that the safety and efficacy cases for vaccinating over-12s was “clear”.

“If they can’t make that decision I want to know why,” she said. “It needs to be put in place urgently. There are clinically vulnerable children who right now have absolutely no option but to attend crowded classrooms and take the risk of being infected, when infection rates in their age groups are at the highest, and that should not be happening.”

Dr Gurdasani said there was also a case for cutting the interval between doses from eight to three weeks for those aged 18 or over, many of whom are currently pushing for early jabs in the hope of being able to holiday abroad this summer.

While a shorter gap between jabs was “sub-optimal” from a medical point of view, it could play a role in reducing the heightened risk of transmission created by the government’s “highly reckless strategy”, she said.

Leeds University associate virology professor Stephen Griffin said it was “crazy and unfair” to simply “allow this virus to pass through the younger population” on the basis that they are less vulnerable to serious illness and death from the initial infection than older age groups.

Even if only 3 per cent of teenage Covid cases result in hospitalisation, that could still mean thousands of younger patients arriving on wards each day over the summer, he warned.

“It’s not the case that they are invulnerable,” said Dr Griffin. “They are less likely to be sick and less likely to stay in hospital for as long. But it’s still damaging and it’s still potentially a very difficult thing for the NHS to deal with in terms of numbers and capacity, particularly with the huge backlog of patients they have.

“I think it’s just wholly irresponsible to allow this to happen. Even a small percentage of a very large number is still a large number.”

The vice-president of Warwick Medical School, Professor Lawrence Young, told The Independent that as well as the “real risk” of long Covid resulting persistent consequences to as many as 13 per cent of infected people in younger age groups, new evidence was emerging of the virus affecting the organs of younger patients.

“I don’t understand why we’re not vaccinating over-12s,” said Prof Young. “It would have been a really sensible thing to do while the youngsters were still in school, so you had them in one place and could get it done quickly.

“The vaccines work perfectly well and are perfectly safe, millions of kids have been vaccinated in the States. It’s not an ethical problem.

“I don’t think younger folk are completely immune and we really don’t understand what the longer-term consequences will be for individuals and indeed for the health service.”