Preview: Matildas vs Republic of Ireland – FTBL | The home of football in Australia – The Women’s Game


The Matildas will play the Republic of Ireland on September 22 (September 21 in Ireland) at the Tallaght Stadium in Dublin.  Remarkably, it will be the first meeting between the two nations’ women’s teams.

In the first post-Olympic friendly, Gustavsson called in 25 players including a number of previously capped Matildas who had missed out on the Tokyo Games and six uncapped youngsters.  There is great anticipation to see this first post-tournament squad and to find out if the new manager will take the Matildas in a new direction.

When Gustavsson took over last spring and disputed his first match in April of this year he arguably did not have the ability before the Olympic Games to make radical changes due to the lack of preparation time and the gap of time in which the Matildas hadn’t played due to the COVID-19 pandemic.

This lack of changes did pay off.  While the Gustavsson era did not start well, with a number of dramatic losses including the Matildas worse defeat in 13 years, they then went on to finish fourth in the Olympics.  It was their best showing in the tournament.

However, Gustavsson now has the time and flexibility to try his ideas on the squad as he builds for the 2022 Women’s Asian Cup in India and 2023 Women’s World Cup taking place in Australia and New Zealand.

Speaking about the current camp and friendly Gustavsson stated:

“While there were many aspects of our Tokyo campaign that we were proud of, I share the strong sentiment of the playing group that there is still unfinished business,”

“The next phase presents a fresh start for all players – whether they are plying their trade in Australia, Europe, Asia, the United States or elsewhere.  We have a long runway to 2023 and we want to utilise every camp, every match, every moment possible to become one day better.”

Despite the lack of previous play against the Irish, the team’s opponents will not be unfamiliar to many of the Matildas involved.  A number of the Irish internationals have either played with or against many of the Australians in the past.

Catley and Williams play with Irish captain Katie McCabe at Arsenal. Ruesha Littlejohn plays at Aston Villa with Emily Gielnik.  Courtney Brosnan & Leanne Kiernan used to be at West Ham United with Mackenzie Arnold and Emily Van Egmond.  All these players alongside Grace Moloney, Louise Quinn, Lucy Quinn and Emily Whelan play against England based Matildas in the FAWSL.

Denise O’Sullivan spent the 2018-19 season on loan to Canberra United and 2019-20 season on loan to the Western Sydney Wanderers.  She and co-captain Diane Caldwell currently plays against Chloe Logarzo in the NWSL.

Quinn, Caldwell and O’Sullivan are to be watched on the defensive end of the pitch.  The three players are world class quality players with years of both international and top domestic experience.

McCabe and Littlejohn are equally good not just defensively but also offensively, both being able to range forward and make dangerous crosses into the box.

Where Ireland is weak is in the front of the park.  While they do have skilled attackers, most of their forwards have relatively little international experience and the country really does lack of a world class striker.

The Republic of Ireland is a team filled with the talent to compete with the likes of Australia.   However, it has arguably been a team that has underperformed of late.  Their recent misses in the qualification campaign for next year’s EURO, which they will not attend, have been frustrating for fans of the girls in green.

However those fans can take joy in one part of the the current state of Irish football.  The upcoming game will also be a landmark one for the Republic of Ireland.

The FAI, Ireland’s football association, announced earlier this month that from now on there will be equal pay for men and women. It was a monumental day for the women’s side who only a few years ago, in 2017, threatened to strike due to pay and playing conditions. 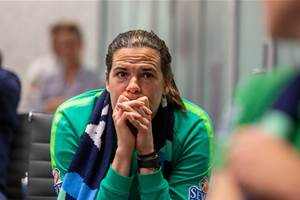 Who will be the Matildas’ number one?

The Matildas currently have three goalkeepers in camp. The new Tony Gustavsson era though has brought forward a new question: Who will be the Matildas number one? 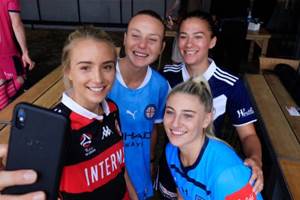 The 5 uncapped Aussies who will next become Matildas

Tony Gustavsson has called up five uncapped players for the upcoming Republic of Ireland clash. For three of them this is their maiden Matildas camp call up.

Touchdown Passes: The 10 Best Throws of All Time

Woodhouse colliery: Decision on coal mine sparks horror among environmentalists