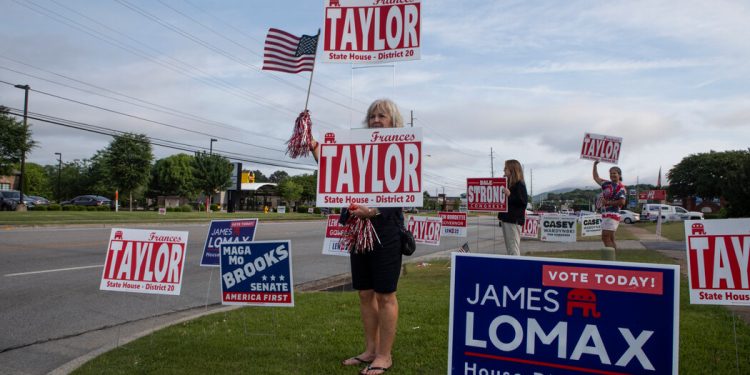 ATLANTA — Republicans in Georgia, a state where Donald J. Trump tried to overturn the lawful election of his presidential rival, Joseph R. Biden Jr., seemed ready on Tuesday to deliver the former president his most stinging rebuke of the midterm primary season, backing Gov. Brian Kemp for re-election over Mr. Trump’s handpicked candidate.

Mr. Kemp’s refusal to embrace the fiction that Georgia had been stolen from Mr. Trump in 2020 had made the conservative governor a particular target of the former president’s ire. Mr. Trump recruited a former senator, David Perdue, who also lost re-election in 2020, to challenge Mr. Kemp. And he backed other Republican candidates in the state who would embrace his lie that he had actually won in Georgia, when in fact he had lost here to President Biden by 11,779 votes.

But as Georgians went to the polls on Tuesday, Mr. Kemp held a commanding lead over Mr. Perdue, who appeared to be flailing, even injecting race into an attack aimed at the presumed Democratic nominee for governor, Stacey Abrams, who is Black.

Other contests that featured Mr. Trump’s intervention were more difficult to handicap. Brad Raffensperger, the Georgia secretary of state whom Mr. Trump had tried to strong-arm into “finding” the votes for a victory, was trying to fend off Representative Jody Hice, a Republican primary challenger who promoted Mr. Trump’s lies about widespread election fraud in Georgia and earned his endorsement.

Representative Marjorie Taylor Greene, a staunch Trump ally who has sympathized with the rioters of Jan. 6, 2021, was facing a challenge from a Republican health care executive, Jennifer Strahan, who accepts the 2020 election’s outcome. And other candidates endorsed by Mr. Trump, such as Vernon Jones in Georgia’s 10th Congressional District and Jake Evans in its Sixth District, were by no means shoo-ins.

Mr. Evans, the son of Mr. Trump’s former ambassador to Luxembourg, hinted that he might question the result of his own primary on Tuesday when asked if he had confidence in the electoral system.

“That’s kind of like asking before a football game whether the referee is going to call the game the right way,” he said. “I don’t know until the game’s been called.”

Georgia is one of four states with primary voting on Tuesday. In Alabama, Representative Mo Brooks, who once enjoyed Mr. Trump’s backing in his quest for the Senate seat of the retiring Republican Richard Shelby, was battling to recover from the former president’s withdrawn endorsement.

The race to become Alabama’s Republican nominee — and, given the state’s partisan tilt, the overwhelming favorite to be the state’s next senator — has been a slugfest. Mr. Brooks, who once exhorted Mr. Trump’s backers on Jan. 6, 2021, to “start taking down names and kicking ass,” has faced fierce opposition from both Katie Britt, a former Shelby aide, and Mike Durant, a war hero who was wounded and captured in the “Black Hawk Down” battle in Somalia.

In Arkansas, a former press secretary for Mr. Trump, Sarah Huckabee Sanders, was the odds-on favorite to win the Republican nomination for governor.

But the focus is on Georgia, which vaulted to the front of the nation’s political consciousness in 2020. Mr. Biden’s victories here and in Arizona were the biggest surprises of the 2020 presidential election, and Georgia then delivered control of the Senate to the Democrats by electing both Raphael Warnock and Jon Ossoff in runoffs with Republican Senate incumbents. Those elections were dogged by Mr. Trump’s fulminations about electoral “fraud,” which might have depressed Republican turnout and delivered Democratic victories.

A grand jury in Fulton County, which includes most of Atlanta, is still examining whether Mr. Trump broke the law with his efforts to overturn the state’s results.

But even voters who agreed with and repeated some of Mr. Trump’s false assertions that the 2020 election was rigged against him declined to back his candidate for governor.

“Even though I sympathize with the fact that Trump did not get a fair shake, I still believe that Kemp did what he could,” said Ken Mugg, 76, an organic farmer who lives in unincorporated Haralson County near the Alabama border. “I feel like that his heart really is still right.”

The biggest bright spot for Mr. Trump may prove to be his effort to avenge one of those Senate losses. He recruited Herschel Walker, a former University of Georgia football great and longtime Trump associate, to challenge Mr. Warnock, and with the former president’s backing, Mr. Walker appeared to be sprinting ahead of a crowded Republican field in the Senate primary.

Mr. Warnock was also cruising in his primary against a little-known challenger from the left, and enters the general election in better shape than many other Democratic incumbents.

One issue that has not arisen: Long lines that have bedeviled past Georgia Election Days, especially in heavily Black areas. Democrats had warned that a state election law passed last year that tightened rules on early voting, absentee voting and ballot drop boxes could lead to a crush of in-person primary voting on Tuesday. That did not materialize.

“Everything so far has been smooth sailing,” Mr. Raffensperger, the secretary of state, said in a morning news conference.