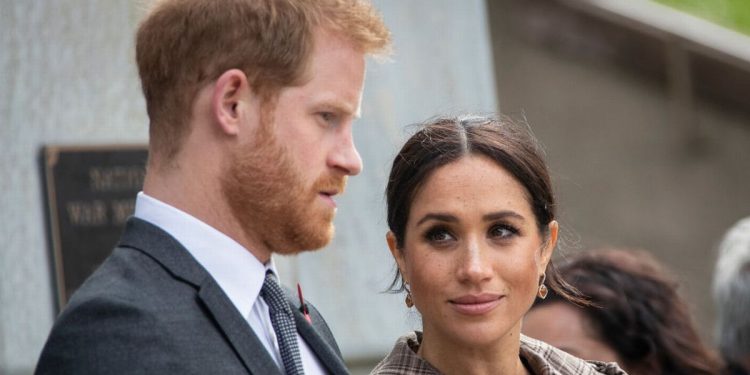 Prince Harry and wife Meghan Markle have been branded as ‘grifters’ by US talk show host Tucker Carlson.

The Duke and Duchess of Cambrige have also been slammed as ‘pathetic’ and ‘irrelevant’ by a retired judge, with a former presidential aide telling Harry that ‘nobody cares’ what he thinks in America.

The criticism comes amid speculation the couple may ditch their $25 million Spotify deal after they hit out at ‘Covid misinformation’ which was ‘being spread’ by fellow podcaster Joe Rogan.

As rumours continue to circulate about their future with Spotify, Fox News talk show host Tucker Carlson hit out at the Royal couple as he called Prince Harry ‘brain-dead’.

The furious host blasted: “That annoying fake duchess from LA and her brain-dead husband threatened to walk unless Spotify muzzled Joe Rogan. But they’re not going anywhere.

“These two grifters have a $25million deal with Spotify for essentially no work.

“So far, we believe they have produced just over 30 minutes of content.

“That means these two have been paid about a million dollars for each minute of talking they’ve done. That’s a good gig. It’s too good to leave.”

Following Carlson’s scathing rant, host Greg Gutfeld also hit out at Harry and Meghan as he branded the pair as ‘deadbeats’.

On a show called The Five, the host raged: “They’re a bunch of deadbeats.”

US talk shows have taken aim at the royal couple
(

And his guest, who was retired New York judge Jeanine Pirro, described them as ‘pathetic’ and ‘irrelevant’.

“In America, nobody cares what you think,” the former judge fumed.

The criticism comes after a Royal expert claimed Harry and Meghan have ‘gone for the money’ over ‘principles’ by sticking by their multi-million dollar podcast deal with Spotify.

Harry and Meghan, who have been supporting vaccine equity, signed a lucrative deal with the streaming giant to host and produce podcasts, estimated to be worth around 25 million US dollars (£18 million), in late 2020.

Following the outcry over Rogan, the Duke and Duchess of Sussex expressed concerns” to Spotify over the Covid misinformation but said they will continue to work with them.

The pair are reportedly pocketing $25 million for their Spotify deal
(

Royal expert Richard Eden says they have been stuck between principles or money, reports the Daily Star.

He said on Mail+ Palace Confidential that the situation was a “nightmare” for the Sussexes, pointing out that while they campaigned against misinformation their decision on Spotify showed that money came first for them.

The royal commentator said: “For years they’ve gone on about the dangers of misinformation, it’s become a real pet cause of theirs.

“And then here they are with Spotify, accused of spreading misinformation through Joe Rogan’s very popular podcast.

“But Harry and Meghan have signed a very lucrative deal with Spotify that’s meant to be worth £18million.

“So between the principles and money, it’s always a question of which will they go for and it seems they’ve gone for the money.

“They put out a rather sort of mealy-mouthed statement about the dangers of misinformation, but they’ve made clear they’re sticking with Spotify. So it looks like sort of Joe Rogan’s won really.”

How Camilla transformed herself from unpopular royal to the next Queen

Experts propose solutions to the opioid crisis in North America

Experts propose solutions to the opioid crisis in North America