An ex-convict feared he had fractured his penis during sex after he woke up with a massively swollen member.

But instead, the 41-year-old had just knocked the domino fragment that he shoved into his penis while in jail two years earlier.

The former drug addict carved a piece of domino into an arrow shape and inserted it between his skin and penile muscle to ‘enhance sexual stimulation’.

Doctors in New York, who treated him, assumed he had snapped his penis because of how swollen it was.

Yet the unidentified man suffered no pain during sex, nor did he hear the dreaded ‘pop’ sound – the hallmark sign of the grisly injury.

Medics felt a 1.5cm-long object buried in his penis, which prompted him to confess about what the lump actually was.

He revealed that during his time in prison he had used a ‘pencil’ to push the domino fragment into his penis. Doctors noted his penis was severely infected and bruised. 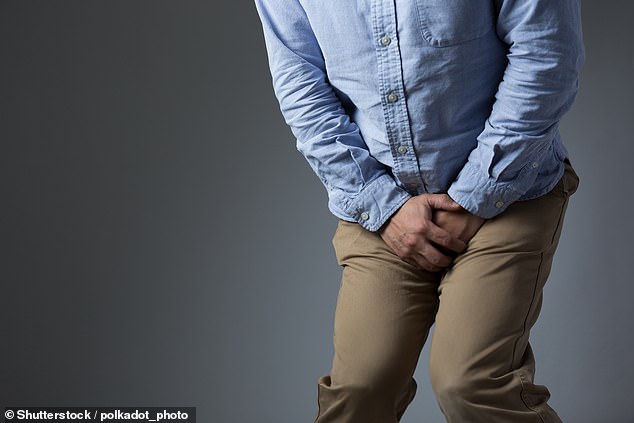 The medics who published the story in the Urology Case Reports journal revealed he was given antibiotics to fight off his bacterial infection.

Dr Jason Elyaguov and colleagues said he returned 18 months later for a follow-up and claimed he could have sex and urinate without trouble.

However, they said that he refused surgery to remove the fragment of domino – which was still buried underneath his skin.

Despite detailing the case in gory detail, the medics did not reveal how long he was in jail for, or what crime he had committed.

Dr Elyaguov and team boasted that the case highlighted how surgical intervention can be avoided.

Writing in the medical journal, they said the man’s ordeal was ‘unique’ for his long-term and benign tolerance.

They said the practice of inserting foreign bodies in the penis to enhance sexual stimulation was more common in Asian countries, specifically among gang members.

In the United States, most reports of self-implanted objects in the penis are found in the incarcerated population.

They said problems normally arise within weeks because the unsterilised objects can cause bacterial infections.

Drug addict, 36, who fashioned a homemade sex toy with a metal ring accidentally STRANGLED his penis and testicles with it for 12 hours causing them to turn blue and swell

A drug addict needed to have a metal ring cut off his genitals with an electric saw after the home-made sex toy cut off his blood supply.

The Moroccan man went to hospital after his penis and scrotum became swollen, blue and cold to the touch. He was still erect when he arrived at the hospital — 12 hours after first squeezing his genitals through the ring.

Medics at Marrakech University Hospital rushed him to surgery, where they tried using bolt cutters to remove the 0.4in (1cm) thick ring but could not break it off.

Doctors returned with a rotating saw and started to cut the ring off. They placed a sheet of metal either side to stop it cutting his flesh.

The surgeons had to pour cold water onto his skin constantly to cool the area down and prevent heat from the saw burning him.

He remained in hospital for 12 hours after the operation and his genitals eventually returned to a normal colour and size without lasting damage.