Pro tattoo artist confuses TikTok with ink on her forehead 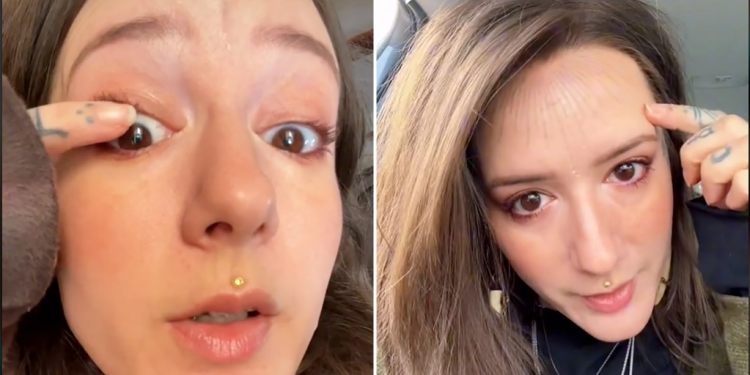 
A tattoo fan who has an unusual inking on her forehead has defended the etching, insisting it’s her favourite of all her designs.

Nikki took to TikTok earlier this week to share a video of herself showcasing some transition contact lenses, but was quickly flooded with comments from people questioning whether or not she was okay due to the forehead tattoo.

“Am I the only one that is seeing lines on her?” one person questioned.

“Girl I thought you were turning into a vampire with the lines on your forehead and using the word ‘transition’,” another joked.

While a third person commented: “It isn’t clear enough ma’am, that’s why everyone was asking.”

Nikki then returned to the social media site to post another video explaining the tattoo, which she inked on herself.

“That video had a lot of people asking about my forehead – apparently it wasn’t clear enough that it’s a tattoo,” she began.

“I tattooed it in grey wash so that it would have more of a shadowed effect. I did do it on myself.

“I’m a professional licensed tattooer of 11 years plus and I’ve had it for going on five years now. I wouldn’t recommend tattooing your own face unless you are confident to achieve what you want.”

She also revealed that the design was modeled on the underside of a mushroom.

“I really liked how organic and wavy the lines were – some of the were shorter and some of them were longer, so that’s kind of the inspiration for this – the waviness, the organic flow of them is all intended,” she said.

“But yeah it’s probably one of my absolute favourite tattoos. I have a seamless bodysuit – every inch of me pretty much is tattooed and it’s almost complete.

“But out of all of them I love my little forehead crown tattoo.”

She also insisted that despite appearances, the tattoo is not faded – it just looks lighter or darker depending on how the light hits it.

“I think it’s gorgeous and going with the underside of a mushroom is amazing but the most important thing is that you love it,” one person commented on the explanation video.

“You shouldn’t have to answer to anyone about anything,” another added.