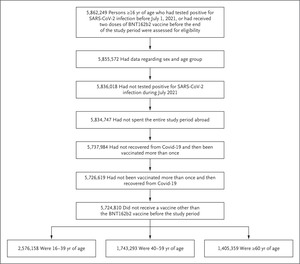 Our analysis, which was based on data from the national database of the Israeli Ministry of Health, focused on infections that were confirmed during the study period, from August 1 to September 30, 2021. During this period, Israel was in the midst of a fourth pandemic wave that was dominated by the B.1.617.2 (delta) variant.17 Israel had already conducted a campaign offering two doses of the BNT162b2 vaccine and had initiated a campaign offering third and fourth booster doses (see the Supplementary Methods 1 section in the Supplementary Appendix, available with the full text of this article at NEJM.org). In addition, beginning in March 2021, unvaccinated persons who had recovered from coronavirus disease 2019 (Covid-19) at least 3 months previously were eligible to receive a single dose of BNT162b2 vaccine.

In this study, reinfection with SARS-CoV-2 was defined as a positive polymerase-chain-reaction (PCR) test in a person who had had a positive test of a sample obtained at least 90 days before the study day.18 The definition of severe Covid-19 was consistent with that of the National Institutes of Health19 — that is, a resting respiratory rate of more than 30 breaths per minute, an oxygen saturation of less than 94% while the person was breathing ambient air, or a ratio of partial pressure of arterial oxygen to fraction of inspired oxygen of less than 300. The Israeli Ministry of Health database includes, for all residents who have received a Covid-19 vaccine, been tested for Covid-19, or been previously infected with SARS-CoV-2, basic demographic information such as sex, age, place of residence, and population sector, as well as full records of vaccinations and confirmed infections.

Eligible persons in the study did not have a documented positive polymerase-chain-reaction assay between July 1 and July 30, 2021, had received at most one vaccine dose before recovery or after recovery from coronavirus disease 2019 (Covid-19), and had not received a Covid-19 vaccine other than BNT162b2 before August 1, 2021. Age groups as of January 1, 2021, are shown. SARS-CoV-2 denotes severe acute respiratory syndrome coronavirus 2.

These cohorts were divided into subcohorts according to the time that had elapsed since the last immunity-conferring event. We used 2 months as the basic time interval to define the subcohorts, but we combined months 12 to 18 for the recovered, unvaccinated cohort and omitted the period of 8 to less than 10 months for the vaccinated and hybrid cohorts because of the small number of persons in those cohorts.

Studies often compare infection rates among recovered or vaccinated persons with those among unvaccinated persons who have not been previously infected. However, owing to the high vaccination rate in Israel, the latter cohort is small and not representative of the overall population. Furthermore, the Israeli Ministry of Health database does not include complete information about such persons. Therefore, we did not include unvaccinated, previously uninfected persons in our analysis.

The study was approved by the institutional review board at the Sheba Medical Center. The Israeli Ministry of Health and Pfizer have a data-sharing agreement, but only the final results of this study were shared.

To analyze the data, we used methods similar to those used in our previous studies.8,20,21 We assumed that the hazard of infection in each cohort would be independent of the sojourn time in previous cohorts (i.e., the time spent in the cohort before a confirmed infection), and we focused on the relationship between the proportional-hazards survival model and the Poisson regression model22 (see the Supplementary Methods 2 section). Specifically, the number of confirmed infections and the number of person-days at risk during the study period were counted for each subcohort.

A Poisson regression model was fitted, with adjustment for age group as of January 1, 2021 (16 to 39 years, 40 to 59 years, or ≥60 years), sex, population sector (general Jewish, Arab, or ultra-Orthodox Jewish), calendar week, and an exposure risk measure. The latter was calculated for each person on each follow-up day according to the rate of new confirmed infections during the previous 7 days in the person’s area of residence; this continuous measure was then categorized into 10 risk groups according to deciles.20 An average exposure risk was imputed to persons with missing data on residency. In order to ensure that the effect of missing data was small, a descriptive comparison of persons who had missing data with those who did not have missing data, as well as a multiple-imputation analysis, were performed (see the Supplementary Analysis 1 section). Goodness of fit of the model was checked by examining Pearson residuals across the categories.

In a supplementary analysis, we fitted a model with an interaction between age group and subcohort in order to estimate age-specific incidence rates in each subcohort. Each case of infection contributed an event to the respective subcohort. On the basis of the estimated parameters of the fitted regression model, the incidence rate in each subcohort, adjusted for the confounders, was estimated as the expected number of events per 100,000 days if all the person-days at risk were included in that subcohort (see the Supplementary Methods 3 section). The 95% confidence intervals were calculated with the use of a bootstraplike simulation approach23 without adjustment for multiplicity. We repeated the analysis of subcohorts with 1-month intervals (instead of 2-month intervals) to better distinguish between persons who chose to be vaccinated earlier and those who chose to be vaccinated later (or between those who were infected earlier and those who were infected later).

To examine the effect of misclassification of persons into cohorts owing to undocumented infections, we conducted a sensitivity analysis with the assumption that either 50% or 70% of true infections were undocumented. There were too few cases for an in-depth comparison of the incidences of severe disease within and between the cohorts with natural immunity and those with hybrid immunity; thus, only a descriptive analysis was performed. The results of a comparison of the incidences of severe Covid-19 between persons who had received two doses of BNT162b2 vaccine and those who had received a third (booster) dose are reported elsewhere.21