Putin’s Favorite Authoritarians in Hungary, Serbia, and France Had a Great Week 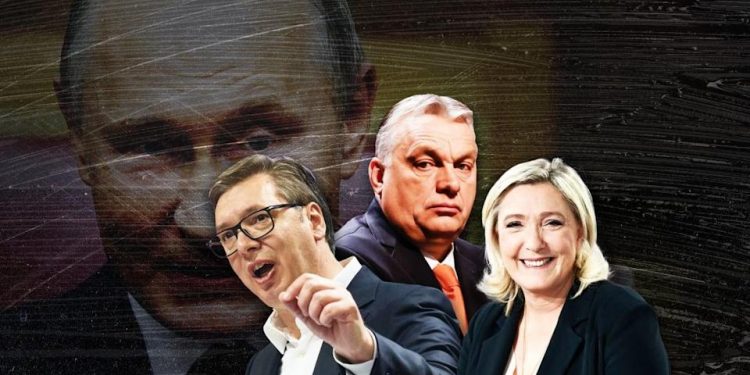 
During the past week, Vladimir Putin’s armed forces suffered serious setbacks in their unprovoked attack on Ukraine. However, during the same period, Putin made significant gains in his broader campaign against Western democracies.

While Russia’s army was forced to withdraw from its failed attempt to surround and capture Kyivand as global outrage grew over reports of serial Russian atrocities across Ukraine—in Hungary and Serbiapoliticians with close ties to Putin won resounding election victories.

Meanwhile, in France, a right-wing political leader (who has received Russian funding) showed surprising strength in the polls, and seemed likely to emerge from Sunday’s elections as one of two candidates heading into a run-off for that country’s presidency.

How Russia’s War Revealed a Blindspot in U.S. Intelligence

These are bad results for Europe and for NATO. What is more, they are part of a global trend that suggests the forces of illiberalism and ethnonationalism, the signatures of the movement Putin has promoted throughout the two decades in the Kremlin, are making steady gains.

On Sunday, Viktor Orban and his Fidesz party achieved a landslide victory in Hungary. Orban, a close Putin ally who has systematically carved away at democracy in his country, celebrated the triumph as a defeat for Western liberal values. He also singled out Ukrainian President Volodomyr Zelenskyy as one of his opponents alongside some of his favorite targets including U.S. financier George Soros and “the international left.” Critics rightly noted that all of these attacks were anti-Semitic dog-whistlesechoing a common tactic of the Hungarian leader. Putin, celebrated the victory.

Serbia’s President Aleksandr Vucic is seen, with Orban, as one of the two leaders in Europe who is closest to Putin. He, too, won victory over the weekend. He, like Orban, has systematically limited freedom of the press and other fundamental democratic rights in his country. Vucic, in fact, has taken an even stronger pro-Moscow line since the invasion of Ukraine, refusing to approve even an initial wave of sanctions against Russia, as Hungary did. (Hungary has resisted further sanctions and has become increasingly defensive of Russia in recent weeks.)

In both Hungary and Serbia, opposition leaders called into question the legitimacy of the elections.

In France, markets have been rattled by the fact that far-right candidate Marine Le Pen has gained steadily in opinion polls preceding this coming Sunday’s presidential election. If she finishes in the top two, along with France’s President Emmanuel Macron, the two would face a run-off on April 24. While Macron is currently favored to win, Le Pen’s strong showing has some analysts weighing the until-recently unthinkable possibility that Le Pen would win.

A Le Pen victory would create a deep division at the heart of the EU and of NATO. Heir to the leadership of the right-wing movement her father startedLe Pen has remained a fixture in French politics with her strongly anti-immigrant, ultra-nationalist policies. Le Pen has met with Putin in the past and her party has accepted Russian funding. During the current election cycle, she received funding from a Hungarian bank. As The Guardian reported, France’s interior minister Gerald Darmanin has warned, “She’s dangerous. She could win this presidential election.”

While Putin’s invasion of Ukraine has reinvigorated NATO and strengthened the North Atlantic alliance, victories of Putin allies like these could impede the West’s ability to act against Putin in the future. They also will promote more isolationist, anti-immigrant views in the EU and—as history has shown with Orban and Vucic—the triumph of the far right bodes ill for the flourishing of democratic rights and protections.

In the U.S., Fox News host Tucker Carlson drew positive parallels between Orban’s victoryand also denounced arguments (all evidence to the contrary notwithstanding) that somehow Russia supported Orban (and Trump). “The international left in both cases somehow blames Russia, which wasn’t involved in either one, so far as I know. That’s kind of the go-to excuse isn’t it,” Carlson said.

Carlson has become a loud and proud cheerleader for Orban, visiting Hungary earlier this year and suggesting that there was much the U.S. could learn from that country. Incidentally, the Conservative Political Action Conference (CPAC) will be holding a three-day event in Hungary this May.

But despite Carlson’s assertions, the evidence is clear. Vladimir Putin has actively promoted right-wing groups and candidates across the West for many years—including, of course, Trump. In every case, his goal was to weaken the Western alliance.

Trump, you’ll recall, according to his own team, was planning to pull the U.S. out of NATOto choose just one egregious example of this. Putin’s effort to influence the Brexit referendum in the U.K. is another such example. He also sought to weaken pro-democracy forces and support those sharing his more autocratic (illiberal) views.

It is this pattern of behavior, this sophisticated, multi-country, long-term effort that is the reason that President Joe Biden has, since his campaign, argued that the defining issue of our time is the struggle between democracy and autocracy. It is linked, of course, to the rise of other anti-democratic forces in the world such as China and major political movements that have also taken an illiberal turn such as that of Narendra Modi in India or Jair Bolsonaro in Brazil. (It is no accident that Putin’s Russia has taken special pains to tighten its alliances with each of these leaders and their countries.) The anti-democracy movement also has strong domestic resonance in the U.S. with Trump’s effort to undermine the 2020 election results and GOP efforts to make voting more difficult.

In short, if you think that Putin’s brutality in Ukraine, Orban’s victory in Hungary, Vucic’s election in Serbia, LePen’s campaign in France or GOP efforts to attack democracy are unrelated stories, you do not understand the nature of the struggle to which Biden has repeatedly referred.

Further, while it is heartening to see the bravery and resilience of the people of Ukraine as they fight off Russian invaders—who are threatened to their core by Ukraine’s embrace of democracy—even just this past week’s results from the other fronts in Putin’s campaign must give us pause.

We must do all we can to ensure democracy wins in Ukraine. But we also would be dangerously short-sighted if we viewed success of any sort there as the end of this struggle, or if we allowed such success to make us complacent.

As Biden has said, this is a generational challenge and it is one whose outcome is not assured unless we understand the totality of the threat and of the resolve it will require to defeat it.

Lakers eliminated from playoff contention with loss to Suns

Lakers eliminated from playoff contention with loss to Suns