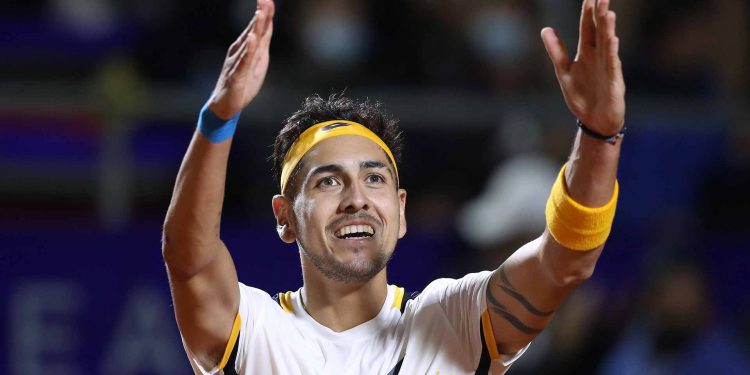 
Chilean qualifier Alejandro Tabilo battled past top seed Diego Schwartzman and a partisan crowd in Cordoba on Saturday to reach his first ATP Tour final with a 6-3, 7-6(6) upset. The Toronto-born World No. 144 has now won 12 consecutive sets at the Cordoba Open, including a pair of straight-set qualifying wins.

Tabilo troubled his World No. 14 opponent throughout the nearly two-hour match, penetrating the red clay with a powerful lefty forehand and keeping his opponent off balance with several well-timed drop shots.

“I’ve been playing my best tennis for a few months now and I finished the year strong,” said Tabilo, who won his first ATP Challenger Tour title in Ecuador in November and beat Sebastian Baez in the Cordoba quarter-finals. “I think I just needed one of these weeks to kind of click and get going. Hopefully this is the start of something good, and hopefully I can keep this level.”

After racing out to a 4-0 lead in the opening set, Tabilo used strong serving to save three break points in serving out the set at 5-3. Schwartzman won the first two games of set two, but then fell victim to another four-game Tabilo run as the Chilean reestablished control on center court behind his heavy ground game.

With Tabilo on the cusp of the biggest win of his career, Schwartzman stepped up to stop his opponent from serving out the match at 5-4. The Argentine measured an on-the-run, cross-court backhand at 15-all and tracked down two drop shots to get back on serve, and the set quickly headed to a tie-break.

The tie-break went entirely on serve until a Schwartzman backhand found the net at 6-all. The match ended on another uncharacteristic Schwartzman error, as he hit long on a second-serve return.

He will eclipse his previous career-high of No. 132 (achieved in November) with his run to this ATP 250 final. Including qualifying, Tabilo has beaten five Argentines this week. He could have faced a sixth home favourite in Londero in the title match, but Ramos-Vinolas will instead represent Spain in the final.

In the second semi-final, Ramos-Vinolas hit five aces and won 79 per cent of his first-serve points (37/47), and neither man dropped serve until three straight breaks closed out the contest. With the first set in hand courtesy of a tie-break, the Spaniard finally broke through on the return at 3-4 in the second. Buoyed by the Argentine crowd, Londero bounced back to break at love, only to lose the match on another break of serve when he double-faulted on a third match point.

“When I came here after Australia, I didn’t expect to be in the final, to be honest,” said the sixth seed, who lost to Baez in five sets at the year’s first Slam. “I was not playing my best. The preseason [I worked] very hard but the feeling was not very good. Now I’m in the final. The only thing I can do is try to fight as much as I can.”