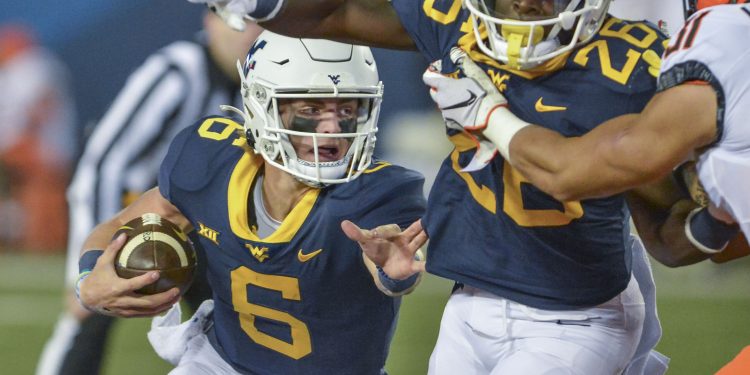 
MORGANTOWN — A fresh start and new beginning only touches the surface of what the WVU quarterback room is going to look like when the Mountaineers open spring practice on Tuesday.

Gone is Jarret Doege, who started at QB the last 26 games from 2019-21, after he decided to use his free COVID year at Western Kentucky. Maligned by a significant portion of the fanbase, Doege was still responsible for 6,453 passing yards and 40 touchdowns through the air.

Gerad Parker, the co-offensive coordinator the last two seasons, is now the tight ends coach at Notre Dame. Sean Reagan, who was the quarterbacks coach the last three years, moved to coach the WVU tight ends.

Both coaching moves corresponded to head coach Neal Brown bringing in Graham Harrell to be the offensive coordinator and QB coach, something Brown felt was a much-needed jolt to an offense that was inconsistent the last three years.

“He has full control,” Brown said of Harrell. “He’s going to give a new wrinkle to it. What it is is his personality and things like that. He felt really good about what we were doing and he is going to come in and put in what he feels really good about that he did in the past.”

Harrell was an All-American quarterback and Heisman Trophy finalist at Texas Tech in the late 2000s, rising the coaching ranks as a member of the Air Raid coaching tree. Prior to WVU, Harrell was the offensive coordinator at USC, but was out of a job when Lincoln Riley brought his own staff in.

According to Brown, the three have a clean slate.

“We have three guys who deserve the opportunity to show what they have. We believe one of them will take the job or we’ll get it narrowed down to two.”

Greene easily has the most experience, though when he was called in, he ran the ball far more than he dropped back to throw — 48 rush attempts to just 16 passes last season.

Crowder played in just one game as a true freshman, going 2 for 2 late in a blowout of Long Island in September, but is more known as a pocket-passer than Greene.

Marchiol is one of the highest-rated recruits in program history, coming in after winning the Arizona Gatorade Player of the Year as a senior. The left-handed, dual-threat stands at 6-foot-1 and weighs 208 pounds.

New and young QBs are nothing new to Harrell, who started two true freshman in his three years with the Trojans. The first was Kedon Slovis — a potential starter for Pitt when the Mountaineers face the Panthers on Sept. 1 — in 2019, and Jaxson Dart last season.

So with three quarterbacks with a combined 21 career pass attempts, what does Harrell look for in a QB with little-to-no game experience?

“Being a leader is part of being a quarterback, whether you like it or not,” Harrell said. “You have to have the courage to speak up. Obviously, on-field production helps with that. That gives you credibility. Being the quarterback also gives you credibility. Whether you like it or not, everybody’s looking at you. The other thing that’s important is whenever we define our culture, those guys better embody it. If they don’t, you’re in trouble as a football team. If the quarterbacks don’t embody your culture, if they don’t embody who you want to be as a football team, or what you are preaching as a coaching staff, you’re in a lot of trouble. If they don’t embody it, no one will.”

Brown said he did not bring in a transfer quarterback for spring practice because he wanted to see what Greene, Crowder and Marchiol could do, and there are only so many reps to go around in 15 practices.

However, Brown hasn’t closed the door on the possibility of bringing in another quarterback.

“If we had gotten a transfer quarterback, I don’t know how we would get a good evaluation on the young guys. It’s not just about now but about the future,” Brown said.

“If that’s not the case, we’ll go find a guy. There will be guys available. I thought it was important those guys get a chance to show what they can do in the spring.”

According to ESPN’s Pete Thamel, former Georgia and USC quarterback J.T. Daniels narrowed his final schools to WVU, Oregon State and Missouri, and will announce a decision after spring practice.

Daniels was coached by Harrell at USC in 2019, but a knee injury lost Daniels for the season, opening the door for Slovis. Daniels transferred to Georgia and was again suffering from nagging injuries that forced him to the bench, as Stetson Bennett ended up winning the national title for the Bulldogs.

Daniels will have two years of eligibility, including the free COVID year, available.