Questions linger as the Nationals pack their bags for home 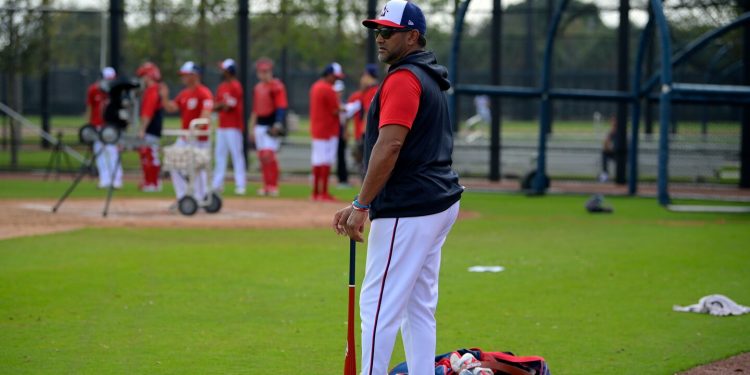 WEST PALM BEACH, Fla. — The first, shortened chapter of the Washington Nationals’ season came to a close Tuesday as the team wrapped up spring training in West Palm Beach. After less than a month in Florida because of the lockout, the Nationals started to clear out their clubhouse to head north.

At the entrance to the clubhouse Tuesday, pitcher Paolo Espino had two black suitcases marked with Nationals tags right next to his locker. A few seats down, reliever Patrick Murphy also had two suitcases along with a bag full of gloves. First baseman Josh Bell rolled his suitcase into another corner, passing by a Louis Vuitton bag sitting between center fielder Victor Robles’s and third baseman Carter Kieboom’s lockers. Opening Day starter Patrick Corbin had two of his own sitting at his locker by the pitchers’ section of the clubhouse.

Meanwhile, Nationals equipment managers were busy at work. On Monday, one was putting clothes and other items into a box marked “SOTO LOCKER.”

By Tuesday, most of the team’s bat bags occupied the middle of the clubhouse and were ready to be shipped to Washington. Even with the extra clutter, the room still felt relatively empty compared to a few weeks or even a few days ago. With several players having been reassigned, there were fewer walking around the clubhouse, which resulted in a quiet lull interrupted only by the occasional sound of packing tape.

The Nationals made a handful of roster moves Tuesday afternoon that created a clearer outlook for the team heading north. The Nationals selected Aníbal Sánchez’s contract for the 40-man roster and optioned Hunter Harvey, Josh Rogers and Sam Clay to Class AAA Rochester.

Martinez called the moves “tough decisions” but wanted Rogers to get more outings as a starter. The moves solidified Sánchez and Joan Adon as the choices to round out the Nationals’ starting rotation.

Adon, 23, caught the eye of the Nationals organization following his start against the Boston Red Sox in the final game last season. The final rotation spot was expected to come down to him and Rogers — who had a shot to stick as a long reliever in the bullpen as well — but Martinez liked what he saw from Adon. He is inexperienced, though; including his start last season he has only pitched five games above Class A. But Martinez called him mature for his age.

“He’s actually thrown the ball really well, and I want to give him an opportunity and see what he can do,” Martinez said.

Fedde was scratched from his last start after experiencing tightness in his oblique but said he felt good after his start Tuesday and is on track to make his first start as long as he wakes up feeling good Wednesday.

“I’ll definitely take that any day of the week.” Fedde said about his start Tuesday. “That’s what today was about, just feeling right, and mission accomplished.”

Martinez said the Nationals planned to start the season with 10 relievers and four bench players. A handful of them were informed during Tuesday’s game that they would be on the roster, including outfielder Yadiel Hernández and Murphy.

With Ehire Adrianza starting the season on the 10-day injured list with a quadriceps injury, the backup position players would be utilitymen Dee Strange-Gordon and Lucius Fox, who was called back up to major league camp Monday, and catcher Riley Adams, as well as Hernández. Strange-Gordon isn’t on the team’s 40-man roster, so some players will have to be removed or placed on the injured list to make space for him, third baseman Maikel Franco and reliever Victor Arano, who will probably land a roster spot following the moves.

What’s left when a franchise rebuilds? A fan base with questions.

Will Harris, whom the team signed to a three-year, $24 million deal in 2020, won’t be one of the relievers on the roster when the season opens. Martinez said Harris had surgery March 31 to clear up some scar tissue built up in his arm. He won’t be able to pitch for three to four weeks, making him a potential candidate for the 60-day IL to clear space for another pitcher. Harris had surgery for thoracic outlet syndrome in May and admitted this spring that he was still experiencing some lingering issues.

With the shortened spring training, Cishek said pitchers have had to be particularly careful about managing their health. But Cishek said his arm feels good.

“You anticipate this day all offseason, just to get started, get settled in your new home,” Cishek said. “Opening Day, they announce you in the lineup and everything, it’s showtime. … It’s a special moment.”