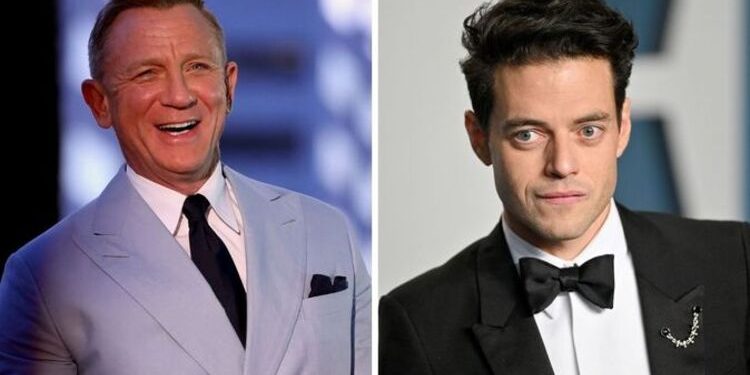 
The James Bond films have made their streaming service debut this week, after the iconic spy franchise was added to Amazon Prime Video for a limited time. Prime will now feature every single Bond film, including the franchise’s most recent outing ‘No Time To Die’, which was released in September last year. The critically acclaimed Bond flick sees Daniel’s 007 five years into retirement, before an old friend from the CIA, Felix Leiter, approaches him for help.

In turn Bond is led onto a trail of the mysterious villain Lyutsifer Safin, played by Rami, who is a terrorist on a revenge mission, armed with a dangeorous new technology that could put the world at risk.

Upon its release ‘No Time To Die’ became the third highest grossing film of all time in the UK, and garnered several awards and nominations, including five BAFTA nominations and an Oscar for Best Original Song.

Meanwhile, while there was no love lost between Daniel and Rami’s character’s onscreen, behind the scenes the pair exchanged a kiss while on set.

Last year Rami told Stephen Colbert on The Late Show that after he came up with a good idea for the film, Daniel kissed him.

Read More: Elvis affair with Ryan O’Neal’s wife ‘The King got me pregnant’

Rami explained: “He grabbed me, picked me up ‒ and I can’t tell who initiated the next moment, whether it was him or I ‒ but a kiss transpired between the two of us.

“I’m going to say that Daniel initiated it and I was very taken aback.”

He added that the kiss was very welcome and at the time asked Daniel: “So, does this make me a Bond girl?”

Then in October as the film was released in cinemas, Daniel confirmed the kiss had taken place, while he and Rami were being interviewed by Entertainment Weekly.

Daniel jokingly added: “Listen, this story has had legs about kissing Rami ‒ I’ve just been trying to give it more legs.

“But I said I used to kiss Rami after the end of every scene. It’s like no big deal.

Rami then quipped: “I would just rush through scenes just to get to that moment that you would get kissed.”

Rami, who won the Best Actor Oscar for his performance as Freddie Mercury in Queen biopic Bohemian Rhapsody, also said that Daniel’s final portrayal of James Bond was worthy of an Academy Award nomination.

Speaking in October, the actor said he would be “very surprised” if his co-star wasn’t at least nominated for an Oscar.

According to Smooth Radio, when asked whether or not Daniel could be in the running for a Best Actor nomination, Rami replied: “I would be a fool if I didn’t consider, if everyone didn’t consider this incredible actor to be in that position.

“The amount of stress, the work ethic, Daniel’s discipline on set, that’s one thing.

“And then to add on his ability as an actor, it’s second to none.”

Daniel did not receive a nomination in this year’s Oscars.