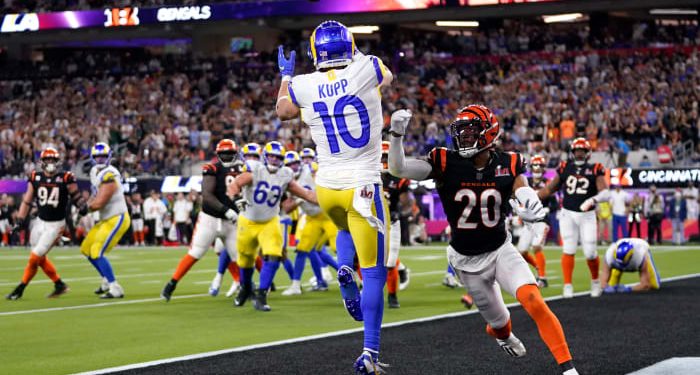 
Good morning, and what a night! The Rams’ recent additions of Matthew Stafford, Odell Beckham Jr. and Von Miller all had an outsized impact on their Super Bowl LVI victory Sunday night. But when it came down to it, homegrown stars Cooper Kupp and Aaron Donald ultimately finished the Bengals off with a clutch touchdown in the corner of the end zone and a game-ending pressure on Joe Burrow, respectively.

Cincinnati covered the 4.5-point spread but failed to complete its Cinderella season. We’ll get into the best bets and bad beats and finer points from the big game and check in on college basketball and the NBA as those seasons begin to heat up.

The Bengals took their first lead of the game on the first play of the second half—a Tee Higgins 75-yard touchdown—and did not relinquish it until there was 1:25 left on the clock. In a Sunday night live blog, Matt Ehalt recapped everything from kickoff to the final kneel, even the halftime performance for interested bettors. Read it to recap the Super Bowl LVI action.

Cooper Kupp Earns MVP Honors: The L.A. receiver was bottled up for much of the second half until his team really needed him. Kupp finished with eight catches for 92 yards and a pair of touchdowns to capture Super Bowl MVP (+600).

National Anthem Easily Clears the Over: Mickey Guyton’s national anthem performance ran much longer than the line that was set around a minute and a half. The four-time Grammy nominee went nearly two minutes, earning bettors who followed Jen Piacenti’s advice a win before the game began.

Matthew Stafford Rewrote His Story: The former No. 1 overall pick finally did what eluded him for so many years in Detroit: Win. And his offseason marriage with Sean McVay and the Rams paid off quickly.

The top of the college basketball world had a major shakeup last week when six top-10 teams lost in the span of just a few days. Michigan was a big riser for its dominant win against Purdue on Thursday. See how the rest of Kevin Sweeney’s projected bracket looks after a wild week across the sport.

Memphis Upsets No. 6 Houston: The Cougars had won 37 games at home before the Tigers came to town on Saturday and stunned them with a 69-59 win. Houston, a 9.5-point favorite, has now lost back-to-back games after losing just two of its first 22.

What’s Next for Ben Simmons in Brooklyn?

Basketball-wise, Simmons’ trade to the Nets makes sense for the team. But the questions around the end of his tenure in Philadelphia remain, and it’s fair to ask whether his disdain for jump shots and refusal to shoot in clutch moments will carry over to his new team.

Vogel Optimistic After Trade Deadline: The Lakers couldn’t improve their roster before the trade deadline as stars around the league shifted places. But Vogel expressed optimism about the ninth-place Lakers having a reset after Thursday’s deadline passed.

Thanks for reading Winners Club and following along on this wild ride of an NFL season. The first edition of this newsletter went out just hours before the first game of the season if you can remember that far: Sept. 9, 2021. The longest season ever rewarded us with a thrilling postseason, and now it’s time for the offseason.

But if we learned anything from this past year, it’s that the offseason isn’t a time to relax. The Rams didn’t, and they went out and got Stafford a little more than a year ago, a trade that paid dividends rather quickly. And 2023 Super Bowl odds are already out if you’re so inclined.

I’ll talk to you on Wednesday.