Rams can finally celebrate being an enduring part of L.A. 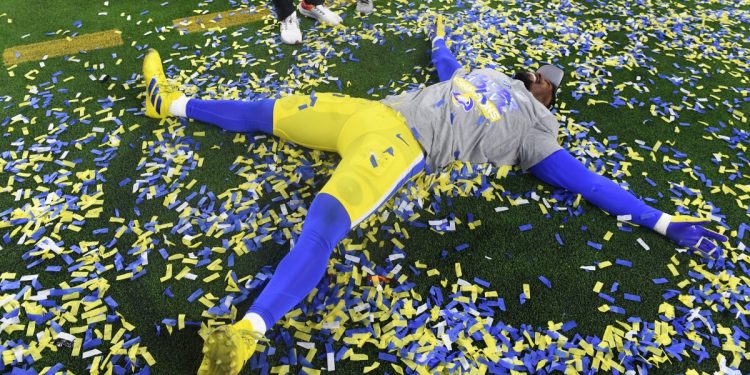 
The blue-and-yellow confetti fluttered to the SoFi Stadium field, and the unofficial Los Angeles anthem pulsed to the heavens.

Roll down the window,

Put down the top,

Crank up the Beach Boys,

We’re gonna ride it ‘til we just can’t ride it no more.

In a night of lump-in-the-throat moments for Kevin Demoff, when the Rams capped a Hollywood script of a season by winning Super Bowl LVI on their home field, that memory is now indelible as tattoo ink.

“The moment for me was standing on the field and they’re playing ‘I Love L.A.’ in L.A.,” said Demoff, the team’s chief operating officer, who grew up in this city and helped bring the franchise back from St. Louis. “Just knowing what that song has always meant to the franchises here.”

The revelry rolled from SoFi down Century to a jet center in Hawthorne, where the Rams staged a victory party in a cavernous airplane hangar, chomping on cigars and passing around the smudged Lombardi Trophy. There were foam thunder sticks that pulsed with light, a rainbow of donuts suspended on a pegboard, live bands on a massive stage flanked by video boards, and wandering players who looked more exhausted than euphoric after a down-to-the-wire 23-20 win.

From the South Bay to the Valley,

From the Westside to the East Side,

‘Cause the sun is shining all the time,

Never has one victory meant more to an NFL franchise than the Rams winning this game. It was not only a referendum on the philosophy of trading away draft picks to build a star-studded team that could win right now, but also it was rocket fuel in terms of continuing to build an L.A. fanbase.

Put simply by Rams general manager Les Snead: “This was a legacy win.”

Fans celebrate the Rams’ first Super Bowl victory in Los Angeles, a 23-20 triumph over the Cincinnati Bengals at SoFi Stadium.

Had the Rams lost, they would have been as stale as that donut wall, just as they were after Super Bowl losses to Pittsburgh in the 1979 season and New England in 2018. Nobody remembers the Super Bowl losers. And for diehard L.A. Rams fans, this was their first win, because they put the “Greatest Show on Turf” St. Louis stuff in a different category.

What’s more, if they had lost to the Bengals, that confetti would have been black and orange, and the Rams would be finding remnants of that tissue paper for years to come between the couch cushions of their $5-billion palace. That stuff goes everywhere.

This season was a roll of the dice, something Rams owner Stan Kroenke has done repeatedly since bringing the franchise back. That’s his hallmark. If he weren’t a risk taker, he wouldn’t have built the palatial stadium, given the OK to trade all the way up for Jared Goff, hired a 30-year-old coach in Sean McVay, mortgaged the future for Jalen Ramsey, backed up the Brinks truck for multiple players — some who paid off, some who didn’t — on and on …

Had the Rams lost, they would have been like one of those cities that hosts the Olympics, and builds a bunch of extravagant venues that become empty husks once the Games are gone. This was about securing a piece of history and building on that, not about finishing in second place.

How durable is this? We shall see. The glitzy San Francisco 49ers rode the philosophy of buy now, pay later to their fifth Super Bowl championship in 1994. They haven’t lifted a Lombardi since.

On the topic of those 49ers, they haven’t won another ring, but they have come awfully close. In the last decade, they have gotten to five conference championship games and two Super Bowls. And they have done it on shifting sands, with multiple coaches and quarterbacks. That’s a contender that is not going away.

And as the Rams were reminded this season, when they are playing the 49ers at SoFi, there is no homefield advantage. This isn’t the Dodgers playing a home game against the San Francisco Giants, or the Lakers playing host to the Golden State Warriors. SoFi was at least as red as it was blue, and when the Rams won the NFC championship game last month, it was as if they opened a vein with all that red draining out of the stadium as the clock expired.

So the 49ers are looming, and it’s clear that they built a sizable fan base in Southern California during those two decades when the NFL was out of L.A. But the Rams also have to contend with the Chargers, who might not have a robust L.A. fanbase but have a spectacular young quarterback in Justin Herbert and a cast that includes Keenan Allen, Joey Bosa and Derwin James. If that team figures it out, it could be dangerous.

All the more reason why the Rams had to win now. They had to capture this moment. And they did it with their stars making the biggest plays. It was Stafford making those surgical passes. It was Cooper Kupp ripping down those receptions. It was Aaron Donald getting his hands on Joe Burrow and slamming the door shut.

“It’s about Stan taking chances,” Demoff said. “You build the world’s greatest stadium, hire the youngest head coach, and then the first year the stadium’s open to fans you get to lift the Lombardi Trophy in your own stadium as the world champions? Awesome.”

The rocking raged until 4 a.m. The rolling has just begun.