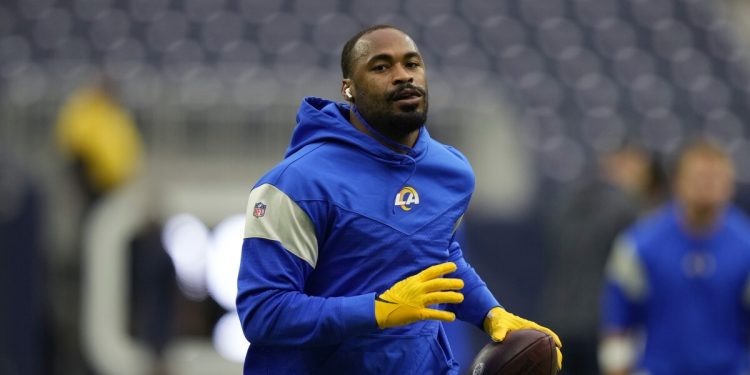 
The Super Bowl champion Rams continued to turn over their roster Saturday, trading wide receiver Robert Woods to the Tennessee Titans, according to a person with knowledge of the deal.

The Rams are receiving a 2023 sixth-round draft pick in exchange for Woods.

Woods, who turns 30 in April, signed with the Rams in 2017 and has been a pillar for teams that made four playoff appearances and played in two Super Bowls in the last five seasons. He joins left tackle Andrew Whitworth, who retired, and punter Johnny Hekker, who was released, as core pieces no longer part of the team.

Woods is recovering from a season-ending knee injury he suffered in November but is expected to be ready for training camp. Woods was injured the day after the Rams signed receiver Odell Beckham Jr., who suffered a knee injury during the Rams’ Super Bowl LVI victory over the Cincinnati Bengals.

In 2020, the Rams gave Woods a four-year extension that included $32 million in guarantees. He was due to carry a salary-cap number of $15.7 million this season, according to overthecap.com. He was due to receive a $3.5-million roster bonus on Sunday, according to Spotrac.com.

With receiver Cooper Kupp carrying an $18.7-million cap number, Woods was regarded as a potential trade piece even before the Rams last week signed free-agent receiver Allen Robinson to a three-year contract that includes $31 million in guarantees.

The Rams receiver corps includes Kupp, Robinson, Van Jefferson, Ben Skowronek, Tutu Atwell and Brandon Powell, the Rams’ kick returner who agreed to terms on Saturday. Beckham is a free agent, but the Rams have said they would like to re-sign him.

Trading Woods ends a successful stint in Los Angeles for the Carson native, who attended Gardena Serra High and was an All-American at USC.

Woods played his first four NFL seasons with the Buffalo Bills, who selected him in the second round of the 2013 draft. He signed with the Rams in March 2017, two months after the team made then 30-year-old Sean McVay the youngest coach in modern NFL history.

Woods and Kupp were integral parts of receiving corps that included Sammy Watkins in 2017 and Brandin Cooks in 2018 and 2019.

Woods eclipsed 1,100 yards receiving in 2018 and 2019. He caught 18 touchdown passes in four seasons, but his value went beyond his statistics. Woods and Kupp were leaders and enthusiastic and effective blockers for former Rams running back Todd Gurley and other Rams ballcarriers.

This is a developing story. The Times will have more soon on Woods.