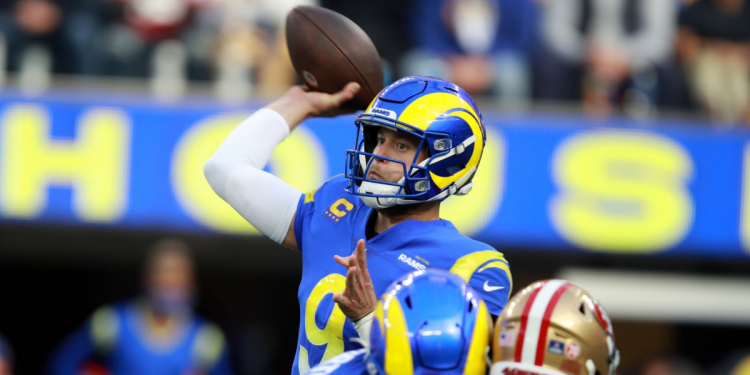 
The Rams will put the age-old idiom about the third time being the charm to the test against the San Francisco 49ers on Sunday. The winner will advance to Super Bowl LVI at SoFi Stadium. The loser will lament a missed opportunity to deal a significant blow to a division rival.

The 49ers swept the two regular-season meetings, including a dramatic comeback win in Week 18 to punch their ticket to the postseason. Will Sunday’s game work out differently for the Rams?

The game will be played at SoFi Stadium, but it may sound more like Levi’s Stadium South once again Sunday. Fans of the 49ers flooded Inglewood and basically took over the Rams’ home field in Week 18, forcing Matthew Stafford and the offense to use silent snap counts to communicate. Based on what has been seen and said so far, Sunday’s game may not be any different.

The Rams don’t care if that part is different or not, but they should care about doing something differently. Sean McVay has not had much luck against Kyle Shanahan and has lost six straight head-to-head meetings with the 49ers. Given that only this season’s two meetings have been with Stafford and the current personnel, those are the ones that deserve more attention, but those two games did not go well.

The Rams gained 5.1 yards per play on offense in a 31-10 blowout loss in San Francisco right before the bye week and then gained 4.1 yards per play in the Week 18 overtime loss at home. The Rams came back from the bye and lost to Green Bay before winning five straight, setting up a chance to win the West Division outright in Week 18 against the Niners. The Rams wound up winning the division anyway because the Cardinals lost, but blew a 17-3 halftime lead to end the regular season 12-5.

It has been a tale of two halves for large stretches of the season for the Rams, and that Week 18 game was no different. In fact, it sort of feels like last week’s game against the Buccaneers, a game that the Rams led 27-3 before eventually having to win on a last-second field goal. In the regular-season finale, the Rams had five second-half possessions and failed to gain more than nine yards on four of them.

McVay has gotten far too conservative with leads in the second half and, up until the first half last week, he had been very conservative with Stafford over the last several games. It is hard to figure out what the game plan will be for the Rams here. Even with a 17-3 lead at halftime in that Week 18 matchup, the Rams only gained 4.6 yards per play in the first half. They have not generated many explosive plays against the 49ers this season.

While Shanahan has had the head-to-head edge over McVay, he’s had his share of questionable late-game calls and clock management decisions. He, too, is known for getting too conservative, like we saw when he was the offensive coordinator of the Falcons in Super Bowl LI. Which coach can you trust with the stakes as high as they are?

From a point spread standpoint, it’s easy to look at the 49ers, who have owned the head-to-head series, but you also have to consider how poorly this San Francisco offense has looked in the postseason. Jimmy Garoppolo has not played well. While he’s not going to be playing in the cold of Lambeau Field, he’s still hurt and has not thrown a touchdown pass in the two playoff games to this point.

With everything at stake, this seems like a game where both coaches will follow as much of a risk-averse strategy as possible. For the 49ers, that means relying on the run. For the Rams, it’s hard to know what that means, given that Stafford has had some hideous turnovers and Cam Akers was very ineffective last week, along with a game-changing fumble that nearly cost the Rams a spot in this game.

Perhaps that means the return of Sony Michel as the feature back. Perhaps Stafford’s two playoff performances have led to a renewed sense of confidence in the quarterback. It remains to be seen what the Rams’ offensive strategy will be, but the game plans didn’t work in the first two matchups and there are plenty of reasons to be skeptical again.

The spread may simply come down to late-game decision making, and that seems like the biggest wild card of this matchup given the two coaches and their histories. Instead, the under seems like the safer pick.

VSiN’s morning show “Follow The Money” with Mitch Moss and Pauly Howard is now on Spectrum SportsNet Monday-Friday from 6 to 9 a.m. PST. Tune in or listen anytime at VSiN.com.