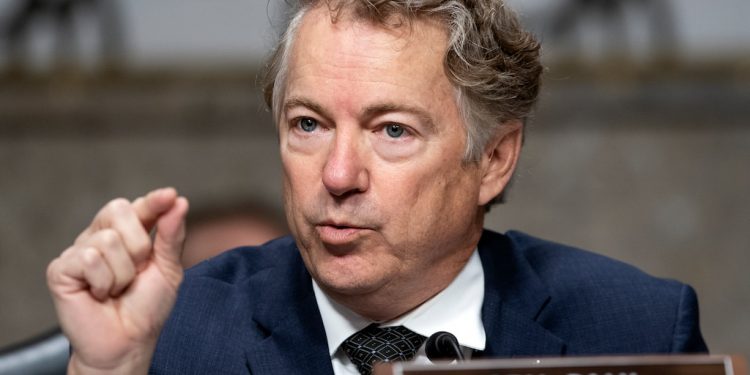 Participants in the self-styled “Freedom Convoy” are expected to flood Ottawa for a third straight weekend in what Ontario Premier Doug Ford called a “siege” as he declared a provincial state of emergency. Protesters have also blocked several U.S.-Canada border crossings, affecting industries on both sides of the border.

Yet when Paul was asked about his thoughts on the convoy and the potential for it to spill over into Los Angeles, home of Sunday’s Super Bowl, or into the District, he said “it’d be great” if the anti-mandate demonstrators came to the United States to “clog things up.”

“I’m all for it,” Paul, a longtime opponent to masking and vaccine mandates, told the Daily Signal, a conservative outlet, on Thursday. “Civil disobedience is a time-honored tradition in our country, from slavery to civil rights to you name it. Peaceful protest, clog things up, make people think about the mandates.”

He added, “I hope the truckers do come to America, and I hope they clog up cities.”

A spokesman with the senator’s office did not immediately respond to a request for comment early Saturday. A White House spokesperson pointed to Friday comments from press secretary Jen Psaki about how the Department of Homeland Security is working with the California Highway Patrol, Los Angeles Police Department and other authorities across California to help respond to any potential protests at the Super Bowl. Psaki noted that while the administration believes in peaceful protests, any potential intentions from truckers to clog up the roads could “have a huge impact on workers and the American public.”

Rand Paul calls on truckers to blockade the Super Bowl and DC: “I’m all for it. Civil disobedience .. is a time-honored tradition in our country from slavery to civil rights to you name it. Peaceful protest, clog things up, make people think about the mandates.” pic.twitter.com/zvCBTe9wkg

The convoy, which started as a protest of U.S. and Canadian rules requiring truckers crossing the border to be fully vaccinated, has disrupted Ottawa as part of a broader movement against mandates. Protests have blockaded notable U.S.-Canada border crossings, such as the Ambassador Bridge, a key trade corridor linking Windsor, Ontario, to Detroit, and inspired similar protests abroad.

The threat of truckers potentially clogging up U.S. roads was elevated on Tuesday when the Department of Homeland Security distributed a bulletin to law enforcement agencies. The DHS warned that a convoy of protesting truckers will potentially begin in California as early as mid-February and arrive in D.C. as late as mid-March, according to a copy of the bulletin obtained by The Washington Post. The agency noted that truckers from Canada may potentially join the convoy as it travels east.

The bulletin highlighted how the convoy would potentially affect Sunday’s Super Bowl at SoFi Stadium in Inglewood, Calif., featuring the hometown Los Angeles Rams and the Cincinnati Bengals. It also warned how D.C. was a possible destination in March before Biden’s first State of the Union address to Congress.

“While there are currently no indications of planned violence, if hundreds of trucks converge in a major metropolitan city, the potential exists to severely disrupt transportation, federal government operations, commercial facilities, and emergency services through gridlock and potential counterprotests,” the memo said.

The Los Angeles County Sheriff’s Department has played down a potential trucker convoy disrupting the Super Bowl, telling Insider there is no “legitimacy” to the threat.

Paul has been a vocal opponent of pandemic-related mandates and has described the mask guidance from the Centers for Disease Control and Prevention as “anti-science.” In August, as the delta variant sent case numbers and hospitalizations soaring, he denounced health mandates against the virus. The senator from Kentucky — who has fashioned himself as the Senate’s chief skeptic of Anthony S. Fauci, the country’s top infectious-disease doctor — urged people to resist the regulations implemented by health experts and elected officials to help prevent the spread of covid.

“They can’t arrest all of us,” Paul said at the time.

Paul’s feelings toward the trucker convoy are much different than his sentiments about Black Lives Matter protests in recent years. After a crowd of D.C. protesters in 2020 yelled at Paul to say the name of Breonna Taylor, who was shot by police in Louisville, the senator claimed his “life was in danger” and denounced Black Lives Matter demonstrators as a “crazed mob.” The Republican also called on the FBI to investigate the incident featuring protesters that President Donald Trump described at the time as “thugs,” according to Reuters.

The senator’s mention of slavery in backing the “civil disobedience” of the truckers was met with blowback from Charles Booker, a Democratic candidate for Paul’s Senate seat, who called the Republican’s words “destructive, intentional, and completely unacceptable.”

Paul acknowledged to the Daily Signal this week that while he didn’t know what effect a trucker convoy would have on D.C., he supported any potential efforts anyway.

“It’d be nice change,” he said. “We’d actually have some traffic.”