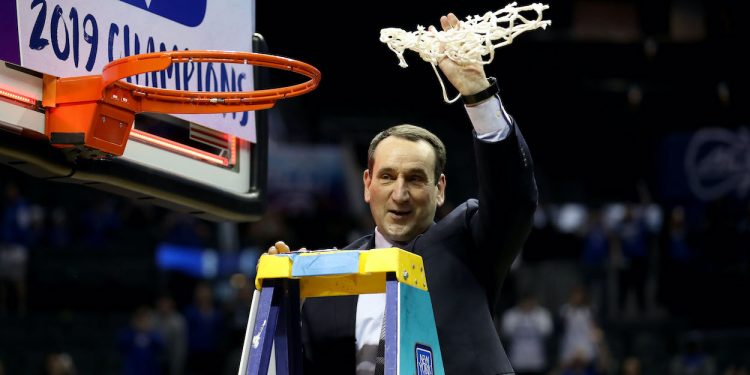 
Mike Krzyzewski is about to call it quits after 42 seasons as Duke‘s head basketball coach. The legendary coach is in his final season on the sidelines, and he’s attempting to lead the Blue Devils to a sixth championship under his command.

So, as Coach K battles through the 2022 NCAA Tournament in search of No. 6, let’s try and rank his five national titles to date.

Let’s start off our list with the 2010 national champions, who were a few inches short of losing in the title game if Gordon Hayward had put just a tad less power into his half-court heave at the buzzer.

This squad, led by future head coach Jon Scheyer, Kyle Singler, and Nolan Smith, ran through the tournament without having to play a No. 1 seed. They faced just one 2 seed and smoked West Virginia by 21 points in the Final Four.

Against 5-seeded Butler in the national championship, Singler led the way with 19 points, and the starters accounted for all 61 points for the Blue Devils. Not coach K’s best team by any stretch, but a title is a title.

The 2015 squad was led by three freshmen — Jahlil Okafor, Justice Winslow, and Tyus Jones, but this national championship wouldn’t have been possible without senior guard Quinn Cook.

This young, talented team went 35-4 in the regular season to earn a No. 1 seed in the NCAA Tournament, and it only played two single-digit games in the tourney before defeating Wisconsin in the title game. All three freshmen went on to become first-round draft picks.

This is probably Krzyzewski’s most memorable championship, considering it was the first of his five titles.

In Christian Laettner’s junior year, the Blue Devils earned a 2 seed and rolled to the Final Four with three double-digit wins in four games. But the defining moment from the 1991 team’s run was beating undefeated UNLV in the Final Four thanks to 28 points from Laettner and 15 from Brian Davis off the bench.

After that incredible win, the national championship against Kansas was a breeze.

Now, this might be the best team Coach K ever had at Duke.

The Blue Devils went 35-4 in the regular season and scored a No. 1 seed in the NCAA Tournament. From there, they won six games in a row by double digits and cruised to a national title by defeating Arizona, 82-72.

Jay Williams (21.6 ppg) and Shane Battier (19.9 ppg) made up a ferocious scoring duo, while Carlos Boozer, Mike Dunleavy, and Nate James all also averaged more than 12 points per game. It was never a fair fight.

1. Christian Laettner goes out with a bang in 1992

The most iconic moment from Coach K’s tenure at Duke has to be Laettner’s game-winning shot against Kentucky to advance to the Final Four in 1992. The Blue Devils went on to beat Indiana in the semifinals and Michigan in the title game to win their second straight national championship.

There’s no better way Laettner could’ve left the program, and his performance in the NCAA Tournament gives the 1992 squad the No. 1 spot on our list.

RELATED: Coach K Turned Down ‘Generational Wealth’ From the Lakers in 2004 to Stay at Duke

‘Rising mortgage rates are no doubt a headwind for housing demand:’ Mortgage rates soar above 4% for the first time since 2019

'Rising mortgage rates are no doubt a headwind for housing demand:' Mortgage rates soar above 4% for the first time since 2019