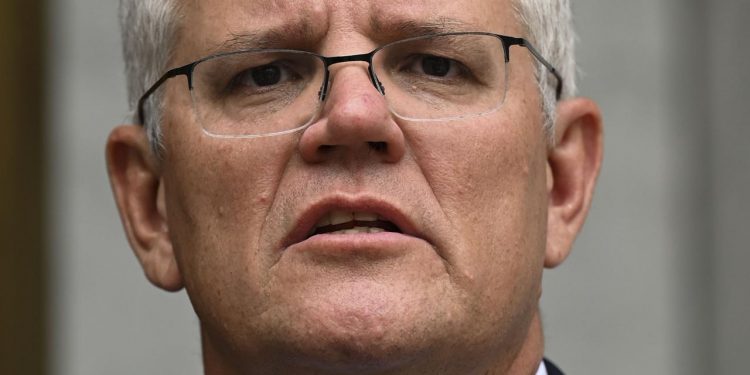 Leaked WhatsApp messages have put more heat on Scott Morrison amid his denials the government is responsible for RAT shortages.

When Prime Minister Scott Morrison raged at rapid antigen test suppliers to “tell the truth” and stop claiming the government was stealing their stock on Friday, at least one furious retailer realised vital evidence that could explode those denials was on his mobile phone.
Leaked WhatsApp correspondence between the retailer and a major importer of rapid antigen tests in Australia reveals one importer confessed in early January that he was “sorry” but capacity was now being redirected to the government.

It did not say the Morrison government was commandeering or demanding to be given the rapid antigen tests at Sydney Airport, but it did suggest the sudden influx of government tenders for millions of dollars in tests in January for aged care providers and other departments had a huge impact downstream for retailers buying smaller amounts to sell to the public.

The importer warned the retailer the stock might not arrive until February, and that the company‘s “capacity” was now being taken up by the government.

Left in the lurch were thousands of families and small businesses that had paid for their rapid antigen test orders from those retailers. Those orders have now failed to arrive.

At least one importer is offering retailers full refunds as it prepares to service massive government orders.

But that’s cold comfort for the retailers who are dealing with angry customers ringing every day, demanding to know where their RATs are.

The retailers had already sold the RATs on the expectation that hundreds of thousands of tests they ordered would arrive.

And that same week the RATs went missing in action, the Morrison government negotiated new tenders for millions of rapid antigen tests, including one contract for a stunning $26 million.

But when the retailers went public telling customers what they were told – that their tests were going to the government – the Prime Minister and the Health Minister threatened the companies with huge penalties.

The leaked WhatsApp messages provided to news.com.au suggest the truth is more complex.

They also support smaller retailers’ claims that orders were redirected or delayed to satisfy government demand – claims the Prime Minister has called “false” and threatened to refer to the consumer watchdog.
News.com.au has sighted the WhatsApp message between a supplier and a retailer where the company apologises and says “sorry” but new orders are now being swallowed up by the government.
In other words, the huge sudden rush of orders for rapid antigen tests from the Morrison government in January distorted the market and made it more difficult for retailers to obtain the hard-to-find tests for families.

The messages also corroborate the story of another Queensland retailer who insists he was told a similar story.

Titled “Order Taken from Sydney Airport”, the email was sent from a Brisbane based supplier to another Queensland supplier that had been contracted by Queensland Rail to secure 20,00 tests.

In the email, the supplier states: “Unfortunately, I am the bearer of bad news. The order you had with us for 20,000 saliva based rapid antigen tests kits was at Sydney Airport as I advised you late last week.”

The email claims the importer of the tests had decided to not honour the agreement and sell them all to “the government” instead.

“Unfortunately, the sponsor of the product has decided (even though they were fully paid for) they will now only be dealing with the Federal government and these tests are no longer available.”

Census International’s Marcus Bolton, who wrote that email, said he stood by the claims which were “word for word” what he had been told by a Sydney supplier he had bought the RATs from.

“They were taken. How you brush it up doesn’t really matter,’’ Mr Bolton told news.com.au

“It wasn’t necessarily the government that took it, it was more that the sponsor (the importer) may have said, ‘We are just going to deal with the government.’

“What are you going to do? You are not going to get the stock. All is fair in love and war. They may have paid more. I don’t know. It’s just insane trying to get stock.”

Queensland Transport Minister Mark Bailey doubled down on the claims on Friday night insisting that the “truth will be exposed” in coming days and it doesn’t bode well for the Morrison government.

“I’m confident the truth will be exposed in coming days, and we will finally find out where the missing RAT kits have gone, because they certainly aren’t in the hands of Australian doctors, chemists, essential workers or everyday Australians whose tests were cancelled.

“To cover up the latest RAT botch up, failed federal Health Minister Greg Hunt has tried to tarnish the reputation of suppliers, who have been established for decades, by calling them ‘online scammers’ to shift blame away from the Morrison government.

“Instead of blame shifting on to long standing suppliers suggesting some internet scam, the Morrison government should come clean with their actions, apologise for their latest Covid botch-up and fix the national mess they have created.”

One of the companies that secured a huge government order, Motion One, has been one of the loudest defenders of the government, issuing public denials that tests were ever seized.

Motion One, trading as Create Urgency, was established only last year but is now servicing huge government orders. It backs up government claims that the tests were never recalled and provided to the government.

CEO Austyn Campbell, an entrepreneur who was previously involved in spearheading a push by US company Bala to import pastel-shaded ankle and arm weights in Australia, is now running millions of dollars in saliva tests into the country.

“Motion One Pty Ltd (Motion One), the exclusive distributor of the Orawell COVID-19 Ag Rapid Saliva Test Device (Product), has not been advised, nor has it stated at any time, that any Government department is requisitioning, or has an intent to requisition, the Product, nor is it aware of any requisitioning actually taking place,‘’ it said in a statement.

“We discovered through third parties that a company unknown to Motion One, a customer of one of our distributors, had notified its own customer base that the product we supply had been ‘recalled’ on the basis of government requisition. We contacted this customer as soon as the discovery was made and demanded that they issue an immediate retraction since there was no justification for a claim that there had been any ‘recall’.

But with millions of dollars in orders paid for rapid antigen tests that have disappeared or mysteriously failed to arrive at Sydney airport, threats of ACCC investigations and angry customers baying for blood, retailers are frightened. So frightened that the retailer who discovered the WhatsApp correspondence with a major supplier doesn’t want his company named.

A fortnight on, the anxious retailer who paid millions of dollars for rapid tests that have failed to arrive is still waiting. So are his customers.
Some retailers who are desperately trying to contact a supplier say they discovered he was hard to catch on the phone because the instant RAT millionaire was sailing on a yacht in the Whitsundays.

Do you know more about rapid antigen test distribution in Australia? If so contact samantha.maiden@news.com.au