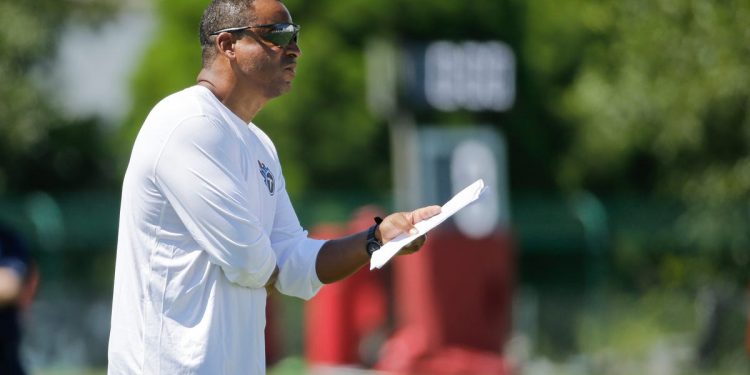 In an amended complaint filed Thursday and obtained by USA TODAY Sports, Horton alleges the Tennessee Titans interviewed him for their head coaching vacancy in 2016 despite having already promised the job to interim head coach Mike Mularkey.

Wilks, meanwhile, claims he was “unfairly and discriminatorily fired” by the Cardinals in 2018 after just one season at the helm.

“When Coach Flores filed this action, I knew I owed it to myself, and to all Black NFL coaches and aspiring coaches, to stand with him,” Wilks, who is now the defensive pass game coordinator and secondary coach for the Carolina Panthers, said in a statement. “This lawsuit has shed further important light on a problem that we all know exists, but that too few are willing to confront.”

The amended complaint also includes new allegations that the Houston Texans and Dolphins have retaliated against Flores in the two-plus months since he first filed suit against the league.

The Cardinals, Texans and Titans generally denied the key claims made against them in a series of statements Thursday. A Dolphins spokesperson did not immediately reply to a message from USA TODAY Sports.

The NFL declined to comment through spokesperson Brian McCarthy. The league has previously pledged to defend itself against the claims in Flores’ suit, saying they are “without merit.”

The addition of two plaintiffs – and specific allegations of discrimination against three more teams – marks a significant expansion of Flores’ original lawsuit, which attorneys Douglas Wigdor and John Elefterakis filed in federal court in New York on Feb. 1.

Flores, who was fired by the Dolphins earlier this year, has alleged that the NFL and its teams engage in “systemic racial discrimination” in their hiring and firing of minority coaches.

“I continue to be humbled by the outpouring of support in connection with my claims against the NFL and applaud Steve Wilks and Ray Horton for standing up against systemic race discrimination,” Flores said in a statement. “Their claims are the unfortunate reality of the problems facing Black coaches in the NFL, which our collective hope in this case is to end once and for all.”

Perhaps the most notable allegation in the amended complaint involves Horton, a 24-year coaching veteran who most recently worked as the Washington Commanders’ defensive backs coach in 2019.

According to the lawsuit, the Titans asked Horton to fly from his Phoenix home to Nashville on short notice to interview for their head coaching vacancy on Jan. 16, 2016. The team had previously interviewed three candidates, according to media reports: Doug Marrone on Jan. 14, and Teryl Austin and Mularkey on Jan. 15

Horton, who was Tennessee’s defensive coordinator at the time, interviewed with five executives at the team’s practice facility, then ran into Mularkey on his way out of the building, according to the lawsuit. Horton recalled feeling that Mularkey’s presence was “odd,” according to the complaint, given that the interim coach had interviewed the previous day. The Titans announced Mularkey’s hiring hours later.

The lawsuit describes Horton’s interview as a “sham” while citing as evidence an interview that Mularkey gave to the “Steelers Realm” podcast in 2020. One of the hosts asked Mularkey, who is now retired, if he had any regrets from his career.

“I allowed myself at one point when I was in Tennessee to get caught up in something I regret, and I still regret it,” Mularkey said on the podcast. “The ownership there – Amy Adams Strunk and her family – came in and told me I was going to be the head coach in 2016, before they went through the Rooney Rule. And so I sat there knowing I was the head coach in ‘16, as they went through this fake hiring process.”

The Titans had already fulfilled their obligation under the Rooney Rule prior to interviewing Horton by meeting with Austin, who is also Black. At the time, the rule only required NFL teams to include one minority coach in their pool of candidates for head coaching jobs.

But the 61-year-old Horton said in a statement he was “devastated and humiliated” to hear Mularkey say that he had already been promised the job, before his own interview.

“By joining this case, I am hoping to turn that experience into a positive and make lasting change and create true equal opportunity in the future,” he said.

The Titans denied having come to a decision prior to interviewing Horton.

“Our 2016 head coach search was an open and competitive process during which we conducted in-person interviews with four candidates and followed all NFL rules,” the team said Thursday in a statement to ESPN. “The organization was undecided on its next head coach during the process and made its final decision after consideration of all four candidates following the completion of the interviews.”

The allegations in the lawsuit involving Wilks are more general.

The lawsuit attempts to contrast the Cardinals’ treatment of Wilks, who was fired after going 3-13 in 2018, with that of general manager Steve Keim, who was arrested for driving under the influence that summer but retained his job.

It also alleges the 52-year-old Wilks did not receive the same time and opportunity to succeed in his position as a white coach – such as his successor in Arizona, Kliff Kingsbury.

“Mr. Wilks was discriminated against by the Arizona Cardinals in a manner consistent with the experiences of many Black coaches,” Wigdor and Elefterakis write in the complaint. “Mr. Wilks was hired as a ‘bridge coach’ and was not given any meaningful chance to succeed.”

The Cardinals responded in a statement Thursday, calling the organizational decisions made at the conclusion of the 2018 season “very difficult ones.”

“But as we said at the time, they were entirely driven by what was in the best interests of our organization and necessary for team improvement,” the team said. “We are confident that the facts reflect that and demonstrate that these allegations are untrue.”

Flores’ portion of the complaint, meanwhile, now includes actions taken by the Dolphins and Texans that it claims are retaliatory.

Flores alleges the Dolphins have both failed to pay out the remainder of his contract and “attempt to claw back compensation paid to him” in an arbitration proceeding, without going into detail. Flores claimed in Thursday’s filing that he made note in a Dec. 2019 memo to general manager Chris Grier and two other executives of “the toxicity that existed” within the organization, including the allegation that owner Stephen Ross enticing him to tank by offering $100,000 per loss.

The Dolphins – like the other two teams listed as defendants in the original lawsuit, the Denver Broncos and New York Giants – have previously dismissed the claims in Flores’ complaint.

The lawsuit also claims the Texans declined to hire Flores because he filed suit against the NFL, which general manager Nick Caserio has publicly denied. The Texans later hired Lovie Smith, who is Black.

“The search for our head coach was very thorough and inclusive,” the Texans said in a statement Thursday. “Due to his previous success as a coach in the NFL, Brian Flores was among the first candidates we held a formal interview with for the position and he remained a candidate until the very end. … In the end, we made the decision to hire Lovie Smith as our head coach and we believe he is the best fit for our team moving forward.”

Since the filing of Flores’ original complaint, the 41-year-old has been hired as the Pittsburgh Steelers’ senior defensive assistant and linebackers coach. The NFL, meanwhile, has announced changes to the Rooney Rule, including a requirement that each team must employ a woman or a minority coach as an offensive assistant.

The NFL and the teams named as defendants in Flores’ lawsuit have yet to file formal answers in court. An initial hearing in the case is scheduled for April 29.