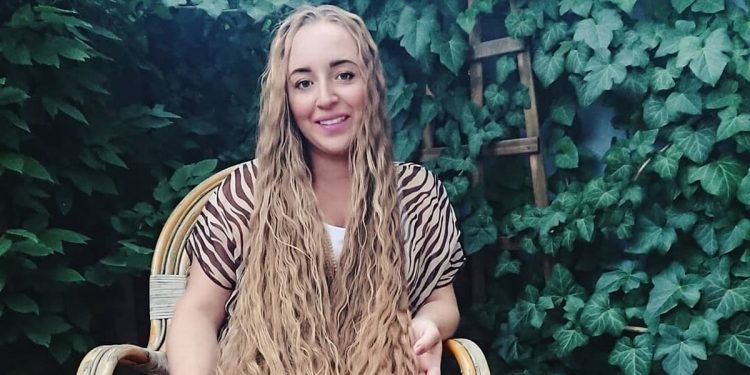 
A woman who is known for her luscious long locks has been inundated with flirty comments from men.

Polish-born Malgorzata Kulczyk, who is often referred to as a real-life Rapunzel, recently uploaded a video of her hair being brushed.

In the clip, the 35-year-old’s hair looks extremely shiny and healthy. It is so long it is even cut out of frame.

The London-based beauty previously said her lusciously long locks make her irresistible to men – and she wasn’t lying.

The clip sent her followers in a tizzy, with hoards of thirsty men leaving comments.

“Beautiful hair I would play in it all the time,” one person commented.

“Cool video of brushing such fantastic, superb very long golden hair. That person is so lucky to get to brush all your shiny and amazing super long hair,” another person wrote.

A third follower commented: “Beautiful. I would love to be the person brushing your hair.”

Others have said her hair is “eye-catching” and that they wish they could touch it.

Malgorzata’s hair has helped her gain thousands of followers, with her account sitting at 15,600 followers at the time of writing.

She has been growing her hair since she was seven and rarely gets it cut.

The 35-year-old last visited the hairdressers for a trim six years ago and chooses to keep her own barnet in order by applying oils and serums to it.

She boasts a 5ft 2in ’do that’s taller than she is which has helped her accumulate a legion of male admirers.

Malgorzata previously said: ”Men can’t believe it is real. They say it is ‘beautiful, impressive and feminine’. Some even fall in love with me because of it.”

While many lust over the influencer’s hair, some envy it.

The Polish-born influencer revealed: “People can be jealous.

“There was one situation when a colleague kept telling me my hair was too long and that I should cut it.

“She said she thought it must be painful for me and that I probably spent so much time on it.

“But after a while she changed her mind completely and has even started to try to grow her own hair out.”

To stay up to date with all the latest news, make sure you sign up for one of our newsletters here.