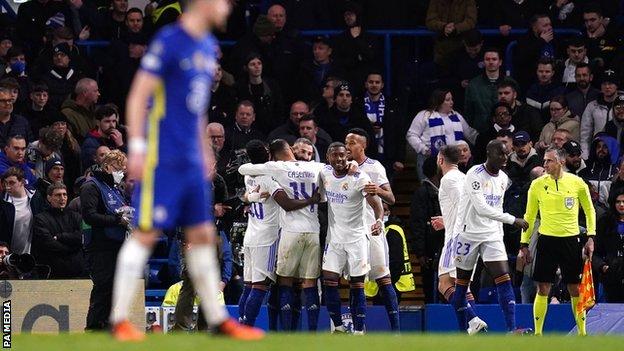 
Striker Romelu Lukaku will not feature when holders Chelsea look to overturn a 3-1 deficit against Real Madrid in the Champions League quarter-final.

A substitute in the first leg, Lukaku has not recovered from the Achilles injury that kept him out of Saturday’s 6-0 Premier League win at Southampton.

Midfielder Ross Barkley is absent because of illness.

Callum Hudson-Odoi and Ben Chilwell are still sidelined by back and knee injuries respectively.

The winners will face Manchester City or Atletico Madrid in the semi-finals, with City leading 1-0 before Wednesday’s second leg in Spain.

Chelsea lost 3-1 to Napoli in the last-16 first leg last season, but advanced to the quarter-finals 5-4 on aggregate.

“Chelsea against Napoli, they lost 3-1 and then they came back,” said Chelsea midfielder Mateo Kovacic.

“Football is always surprising and we need to be more than 100%.”

On losing to Real in the first leg, he said: “We didn’t have our best game and our result is not good, but there is hope and we are motivated to show our best.”

This will be Chelsea’s first game at the Bernabeu in European competition.

When they met Real in the semi-finals last season, Real hosted their home leg at the Alfredo Di Stefano Stadium because of rebuilding work at the Bernabeu.

‘Chelsea will not give up’ – Ancelotti

Real Madrid’s former Chelsea boss Carlo Ancelotti said his side still have work to do to reach the semi-finals.

“Chelsea will come here to rescue the tie, I have no doubt about it,” said the Italian, who led the Blues to the Premier League title in 2009-10.

“I’m sure Chelsea will come here to win. That’s the spirit of football, the spirit of big clubs and great players, to never give up.

“I’m lucky to have a group of players that know these types of games really well, that anything can happen.

“They are in a good spirit and happy with the opportunity to reach a Champions League semi-final.

“But Chelsea are a very strong rival. We have to have a lot of respect.”