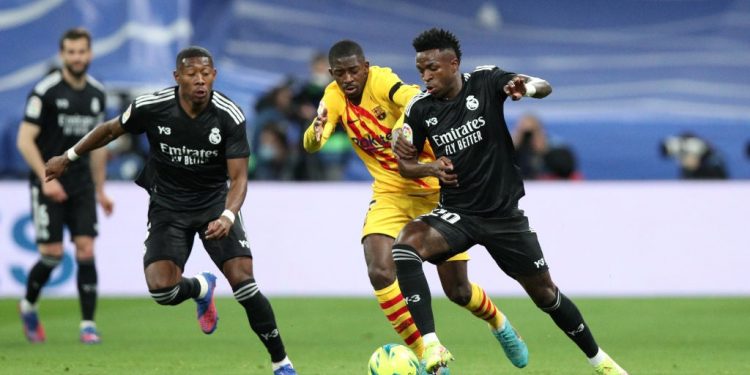 Real Madrid host Barcelona in El Clasico tonight as the LaLiga rivals meet in the biggest derby in European football.

After losing the Spanish title to Atletico Madrid last season, Real Madrid hold a clear advantage in the table this year and come into the weekend 10 points clear of second-place Sevilla, with Barcelona a further five points behind in their bid to qualify for next season’s Champions League.

Barca replaced managaer Ronald Koeman with club legend Xavi earlier this year and have improved drastically since. They are 11 games unbeaten in all competitions and haven’t lost in 10 games away from home in the league.

However, Xavi’s side still have work to do if they are to finish in the top four and guarantee Champions League football but victory in the Bernabeu could represent a turning point for the club in their quest to get back to the top of the table.

Real Madrid have won both meetings between the teams this season, across all competitions, and Barcelona will want to land a blow of their own now that they in a good run of form.

Follow all the action from the 249th El Clasico as Real Madrid host Barcelona in LaLiga:

45 mins: No time added at the end of the first half. It’s been a superb first 45 from Barcelona. They controlled the ball, created chances for fun and scored two goals. It could have been more if not for Thibaut Courtois.

Carlo Ancelotti needs to change things or else Real Madrid are going to lose this Clasico.

41 mins: Dembele attempts to dribble around Nacho once again but the defender wins the ball this time and knocks it out for a throw in. Barcelona send the ball back into the midfield where De Jong flicks the ball into the area for Pedri. He gives it to Jordi Alba whose cross just skims the top of Aubameyang’s head and Real can clear.

38 mins: Real Madrid are floundering! Barcelona win a corner that Ousmane Dembele swings into the box. Ronald Araujo leaps higher than Casemiro to win the ball in the air and whips his header past Thibaur Courtois to double Barcelona’s lead!

35 mins: Chance! Barcelona could have had three or four goals already. A long ball comes up to Frenkie de Jong who brings the ball under control in Real’s final third before sliding it into the box for Aubameyang. He drills a low left-footed shot at goal but Courtois dives low to his left and denies him again!

32 mins: Real Madrid are really missing Karim Benzema. His presence up top is a comfort and to deal with his absence Carlo Ancelotti has changed Madrid’s formation. It’s not working out for them. A rethink may be needed before Barcelona get too far ahead.

29 mins: There’s the opener! It’s a deserved goal for Barcelona who’ve been brilliant so far. Ousmane Dembele brings the ball down the right wing and takes on Nacho. He shifts it to away from the left-back and floats a cross into the middle of the box. Pierre-Emerick Aubameyang makes a move into the six-yard box, leaps into the air and guides his header into the bottom corner!

27 mins: It’s better from Real Madrid. They keep the ball and work it up the pitch. Luka Modric brings it into midfield from the left and gives it to Casemiro who lays the ball back to Eder Militao. Militao threads another fine through ball up to Rodrygo who can’t bring it under control and lets it roll out for a goal kick.

24 mins: Toni Kroos is shown the first yellow card of the game for late challenge on Sergio Busquets. Carlo Ancelotti doesn’t look too pleased with what he’s seeing out there. Barcelona look very comfortable with Real’s best chances coming from counter-attacks.

21 mins: A poor clearance from Barcelona sees Dani Carvajal win the ball in midfield. He quickly plays it up to Rodrygo who shifts into a central area and has a shot blocked on the edge of the box allowing the visitors to boot the ball clear properly this time.

18 mins: Close! Barcelona get lucky as a pacey pass from the right wing flies past everyone on the edge of the Real box before finishing with Ferran Torres. He rolls the ball onto his right foot and attempts to curl one into the far bottom corner but sends his effort narrowly wide of the back post.