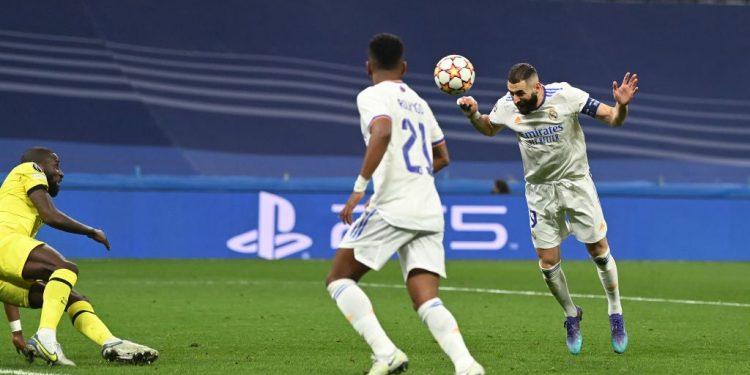 Follow live reaction after Chelsea were denied one of the great Champions League comebacks against Real Madrid as Karim Benzema’s extra-time winner settled a thrilling Champions League quarter-final tie in the Bernabeu.

The European champions were two goals down following last week’s 3-1 defeat at Stamford Bridge but Mason Mount’s strike on 15 minutes gave the Blues the perfect start.

Antonio Rudiger then levelled the tie after half-time with a header at the back post, before Timo Werner’s deflected finish stunned the hosts as Chelsea led on aggregate.

But substitute Rodrygo responded to pull Real Madrid level five minutes later and force extra time, where Karim Benzema put his side ahead with another headed goal in the tie. It means Real Madrid will advance to the semi-finals, where they will face either Manchester City or rivals Atletico. Follow reaction to a classic Champions League quarter-final below:

What a brilliant two legs of Champions League football that was. It swung both ways throughout the 120 minutes but somehow Real Madrid found a way to win.

They were second best for 75 minutes but Rodrygo’s goal saved them and took the game to extra-time. Then came Karim Benzema. He had a very quiet night. Chelsea kept his supply line through Vinicius Jr closed off for so long but it only took one run, one cross and one header for Real Madrid’s talisman to send them through to the semi-finals.

Chelsea are out of the Champions League.

120 mins: Chance! Another corner for Chelsea and Edouard Mendy comes up to help out. Real win the initial ball and nod it clear of the box. Hakim Ziyech recovers it for Chelsea and scuffs a shot into the feet of Jorginho. He stops the ball and pulls a shot of his own wide of goal from inside the area!

Three minutes of stoppage time to play. Can Chelsea score?

117 mins: Chelsea win a corner and whip it into the box. The ball gets recycled and after a scramble in the box the ball rolls out to Jorginho whose shot is blocked by Valverde!

Chance! Chelsea come again with James in possession on the right wing. He swings a cross into the middle and finds Havertz in space. Havertz has a free header right in front of goal but knocks his effort wide of the near post! That was the chance for Chelsea.

114 mins: Save! Thomas Tuchel gets booked for arguing with the referee. He’s gesticulating wildly on the sidelines encouraging his players up the pitch and they oblige. Hakim Ziyech makes a run into the left side of the box and receives the ball. He’s got options to his right but goes for it himself and draws Thibaut Courtois into a sharp save to his right!

111 mins: Havertz is booked for a foul on David Alaba. Chelsea are the ones pushing now but Real Madrid are defending deep and the visitors can’t find a way through.

108 mins: Dani Carvajal passes the ball back to his goalkeeper but underhits it. Havertz chases it down and almost beats Courtois to the ball but the Real Madrid goalkeeper hoofs it clear.

ET second half: Saul Niguez comes on to replace Ruben Loftus-Cheek and Jorginho is on in place of Mateo Kovacic for Chelsea. The Blues have to score. They get the last 15 minutes of this incredible game underway.

Thomas Tuchel has pulled the Chelsea players into a huddle on the side of the pitch. Real Madrid look more relaxed than they have for most of the night.

105 mins: Half-time in extra time and Real Madrid are back in front on aggregate. There’s 15 minutes of extra-time to play and Chelsea need another goal to force the tie to penalties.

Lauryn Shannon is Pregnant with Twins!