Record-breaking, ultrafast devices provide a step toward protecting the power grid from EMPs 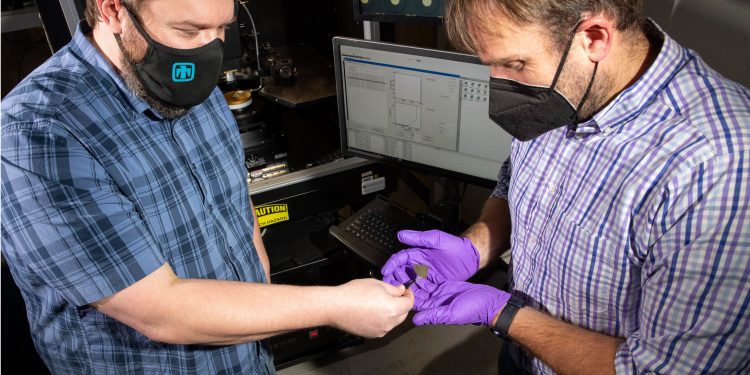 
Scientists from Sandia National Laboratories have announced a tiny, electronic device that can shunt excess electricity within a few billionths of a second while operating at a record-breaking 6,400 volts—a significant step toward protecting the nation’s electric grid from an electromagnetic pulse.

The team published the fabrication and testing results of their device on March 10 in the scientific journal IEEE Transactions on Electron Devices. The team’s ultimate goal is to provide protection from voltage surges, which could lead to months-long power interruptions, with a device that operates at up to 20,000 volts. For comparison, a household electric dryer uses 240 volts of electricity.

An electromagnetic pulse, or EMP, can be caused by natural phenomena, such as solar flares, or human activity, such as a nuclear detonation in the atmosphere. An EMP causes huge voltages in a few billionths of a second, potentially affecting and damaging electronic devices over large swaths of the country.

EMPs are unlikely, said Bob Kaplar, manager of a semiconductor device research group at Sandia, but if one were to occur and damage the huge transformers that form the backbone of our electric grid, it could take months to replace them and re-establish power to the affected portion of the nation.

“The reason why these devices are relevant to protecting the grid from an EMP is not just that they can get to high voltage—other devices can get to high voltage—but that they can respond in a couple billionths of a second,” Kaplar said. “While the device is protecting the grid from an EMP, it’s at a very high voltage and thousands of amps are going through it, which is a huge amount of power. A material can only handle so much power for a certain amount of time, but we think the material in our diode has some advantages over other materials.”

A regulator valve for the grid

The new Sandia device is a diode that can shunt a record-breaking 6,400 volts of electricity within a few billionths of a second—a significant advancement toward being able to protect the nation’s electric grid from an EMP. The team, including Sandia electrical engineer Luke Yates, the first author on the paper, is working towards fabricating a diode able to operate at around 20,000 volts, since most grid distribution electronics operate at around 13,000 volts.

Diodes are electronic components found in nearly every electronic device and serve as one-way regulator valves, said Mary Crawford a Sandia Senior Scientist leading diode design and fabrication for the project. Diodes allow electricity to flow in one direction through the device, but not the other. They can be used to convert AC power into DC power, and in this project, divert damaging high voltage away from sensitive grid transformers.

Kaplar agreed that the diode operates somewhat like a regulator valve in plumbing. He said, “In a regulator valve, even if you open that valve all the way, you can’t flow an infinite amount of water through the valve. Similarly, there’s a limit to how much current you can flow through our diode. If the valve on the pipe is closed, if the pressure reaches a certain point, it’ll burst. Analogously, the diode cannot block an infinite voltage. However, our EMP device uses the point at which the diode can no longer block the high voltage, holds the voltage to that ‘pressure,’ shunting the excess current through itself, to the ground and away from the grid equipment in a controlled, non-destructive fashion.”

The voltage surges caused by EMPs are a hundred times faster than those caused by lightning, so experts don’t know if the devices designed to protect the grid against lightning strikes would be effective against an EMP, said Jack Flicker, a Sandia electric grid resiliency expert on the team.

“The electric grid has a number of different protections,” Flicker added. “They range in timeframe from very fast to very slow, and they’re overlaid on the electric grid to ensure that an event cannot cause a catastrophic outage of the electric grid. The fastest protection that we typically have on the grid reacts against pulses at one millionth of a second, to protect against lightning. For EMPs, we’re talking ten billionths of a second, a hundred times faster.”

The new Sandia device can react that quickly.

Part of what makes the diode special is that it is made from gallium nitride, the same basic material used in LEDs, Kaplar said. Gallium nitride is a semiconductor, like silicon. But because of its chemical properties, it can hold off much higher voltage before it breaks down than silicon, Crawford said. The material itself also responds very quickly and therefore is a good candidate to achieve the fast response needed to protect the grid from an EMP.

Crawford and materials scientists Brendan Gunning and Andrew Allerman made the devices by “growing” gallium nitride semiconductor layers using a process called chemical vapor deposition, she said. First, they heat a commercially available gallium nitride wafer to around 1,800 degrees Fahrenheit and then add vapors that include gallium and nitrogen atoms. These chemicals form layers of crystalline gallium nitride on the surface of the wafer.

By tweaking the ingredients and the “baking” process, the team could produce layers with different electrical properties. By building up these layers in a specific order, combined with processing steps, such as etching and adding electrical contacts, the team produced devices with the needed behavior.

“A major challenge of achieving these very high voltage diodes is the need to have very thick gallium nitride layers,” Crawford said. “The drift regions of these devices have thicknesses of about 50 microns, or 1/6th of a sheet of notebook paper. This may not sound like a lot, but the growth process we use can have growth rates of only one or two microns per hour. A second major challenge is maintaining very low densities of crystalline defects, specifically impurities or missing atoms in the semiconductor material, throughout the growth time in order to generate devices that work at these very high voltages.”

For the team to reach their ultimate goal of a device that operates at 20,000 volts, they will need to grow the thick layer even thicker with even fewer defects, Crawford said. There are several other technical challenges to constructing a device that can operate at such high voltages and currents, she added, including designs to manage the very high internal electric fields within the devices.

Once Crawford’s team fabricated the devices, Flicker and his team tested how the devices responded to fast voltage spikes, similar to what would occur during an EMP. His challenge has been modifying a tool to measure the very fast response time of the devices.

“Developing the tools that can accurately measure the very fast responses is very difficult,” Flicker said. “If we’re talking one or two billionths of a second, they need to be able to measure even faster than that, which is a challenge.”

Flicker and his team used very specialized equipment to apply a high voltage pulse, and measure the electric pulse that is reflected back from the diode to tell when the device turns on, very accurately and in less than a billionth of a second.

Diode devices like the Sandia gallium nitride diode can be used for other purposes, beyond protecting the grid from EMPs, Kaplar said. These include smart transformers for the grid, electronic devices to convert electricity from roof-top solar panels into power that can be used by household appliances, and even electric car charging infrastructure.

Commonly, solar panel converters and electric car charging infrastructure can handle 1,200 or 1,700 volts, he added. But operating at higher voltage allows for higher efficiencies and lower electricity losses. Another portion of the project is to develop diodes for these types of devices that operate at high, but not record-breaking voltage but are easier to manufacture, Kaplar said. The Naval Research Laboratory is leading this part of the project.

Some smart transformers and electronic devices can now operate at up to 3,300 volts, Flicker said, but efficiencies would be even greater if they could operate at 10,000 or 15,000 volts with one semiconductor device.

“We have this primary goal of protection of the electrical grid, but these devices have other uses beyond that,” Flicker said. “It’s interesting to have our application area, but know that these devices can be used in power electronics, power converters, everything that’s at very high voltages.”