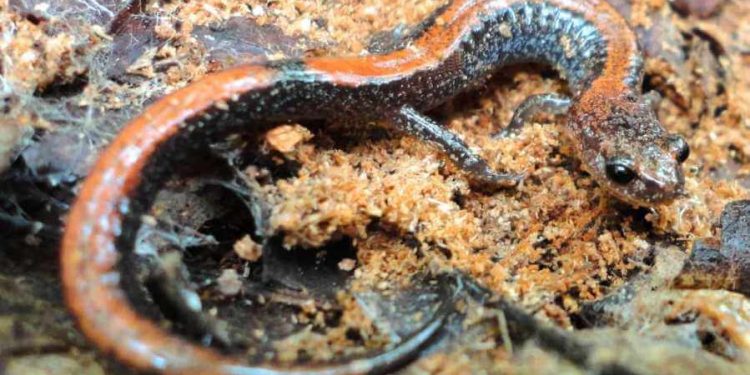 
If average temperatures rise as projected in eastern North America in coming decades, at least one widespread amphibian species likely will be unable to adjust, and its range may shift northward, according to a new study led by Penn State scientists.

In a novel experiment, researchers devised a method to measure the metabolic rate of red-backed salamanders from different regions exposed to warmer temperatures — analyzing how much more energy the small, hardy woodland amphibians would expend to survive in the forests they now inhabit from Quebec south to North Carolina, and west to Missouri and Minnesota.

To stay cool and not burn energy, salamanders have evolved strategies such as burrowing under rocks and logs, explained study co-author David Miller, associate professor of wildlife population ecology. But if they are hiding to stay cool for much longer periods, they are not foraging and eating, and at the end of a long summer their condition is deteriorated.

“Because these salamanders are ectotherms, cold-blooded animals, essentially what happens is when it is cold, they quit burning energy — as long as they don’t freeze, they can go long periods without food,” said Miller, who’s research group in the College of Agricultural Science has been studying the demise of amphibians for the last decade. “Conversely, in the summer, when it’s really warm, their body temperature is elevated, and that raises how much energy they consume. So, during the warmest part of the year, if they’re not eating, they’re experiencing an energy deficit.”

Depending on atmospheric greenhouse gas concentrations and associated level of warming, global climate is very likely to warm by 2.16 to 3.42 degrees Fahrenheit from now to 2040, according to the United Nations. That will affect red-backed salamanders, Miller predicted, and may result in at least the southern end of their range moving northward.

To assess the energy expenditure of red-backed salamanders, and to determine whether their metabolic rates differed at the warmer and cooler parts of their range, lead researcher David Muñoz conducted an innovative study. Researchers collected salamanders from four populations in April and May of 2017 near Richmond, Virginia; Millmont, Pennsylvania; Ithaca, New York; and Turners Falls, Massachusetts.

For each population, the team collected salamanders over two days by searching beneath rocks and logs. To test for life-stage differences, researchers captured 18–20 juveniles and 18–20 adult male salamanders at each site. They brought all specimens to a laboratory in the Department of Entomology, where they conducted tests using ultra-sensitive equipment.

Muñoz, who was then a doctoral researcher in Miller’s lab and is now an analyst with the New Teacher Project, modified small refrigerators to serve as thermal chambers to subject the salamanders to warmer conditions. “Then the salamanders were placed in a small tube, and we measured how much oxygen was consumed by the salamander over two hours and how much carbon dioxide it emitted,” he said. “We repeated the process multiple times, at different temperatures.”

In findings recently published in Ecology and Evolution, the researchers reported that they examined relationships between higher temperature and metabolic rate across four widespread populations of salamanders to determine if they vary in metabolic response, and if their metabolic rates adjust to seasonal thermal cues. Salamanders from warmer climates lowered metabolic rates when acclimating to summer temperatures.

These depressed metabolic rates may act as an energy-saving mechanism during the warmest time of the year, the researchers suggested, adding that no such adjustability was evident in populations from cooler climates. Both juvenile and adult salamanders exhibited metabolic “plasticity,” they pointed out.

The research is important, Miller contends, because predicted changes in global temperature are expected to increase extinction risk for ectotherms such as red-backed salamanders, primarily through increased metabolic rates. “We expect that warming will impact the energy budgets of salamanders, potentially affecting individual growth and reproductive success,” he said.

The Department of the Interior Northeast Climate Science Center funded this study, which was based on research supported by the National Science Foundation.

Benefits of A Career In childcare

Benefits of A Career In childcare