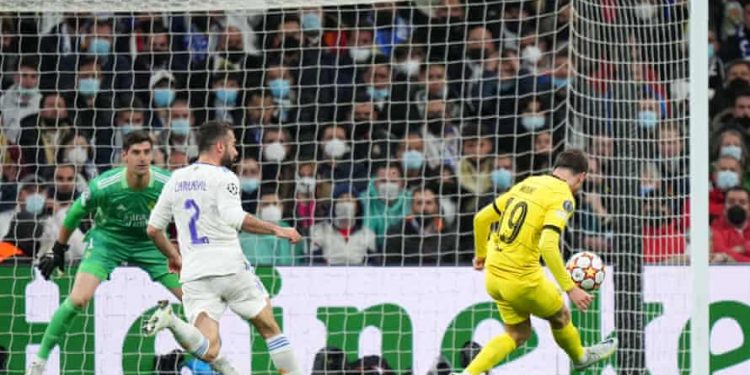 
How do you kill that which cannot be killed? Sanctioned, escrowed, hawked about the place like a bag of meat in a country pub: but still that self‑fuelling, indissoluble substance that is Chelsea Football Club continued to roll along on an extraordinary night at the Bernabéu.

There was defeat with honour for Chelsea here, a 3-2 win over 120 thrilling gruelling, relentlessly high‑craft minutes that translated into a 5-4 loss on aggregate. But the numbers hardly told the story, on an evening that felt also like a kind of farewell, a Viking funeral for an undeniably glorious part of this club’s history.

It seemed fitting Chelsea’s three starting academy players were among the stars. Mason Mount was teak-tough, whip-smart and a relentless pest for Madrid’s midfield. Ruben Loftus-Cheek ran himself into the ground.

But the real heart of Chelsea’s act of resisting to the fates was Reece James, whose defensive performance in the Bernabéu was jaw-droppingly fine, so good that Chelsea’s main concern now must be a business plan convincing enough to keep him on the staff.

On the ball he kept coming forward. When he didn’t have it he simply stood, socks down, and glowered, or prowled or stalked. John Terry had a more theatrical leadership pheromone. James just carries it with him.

Madrid had been in imperial mood from late afternoon, the city illuminated by an electrical storm, streets around the Bernabéu swimming with painterly puddles, and mobbed with a pre-celebratory scarf-twirling vanguard. Don’t Play With The King read the banner along the ultras end before kick-off, accompanied by a vast and slightly weird Viking-based cartoon. It sounds ridiculous. It looked great from the upper tiers of this vast cantilevered concrete bowl, the lights brilliantly harsh, the pitch a dazzling deep lime.

Thomas Tuchel had used a lot of exciting words in his pre-match chat, words such as “duels”, “offensive transition” and “an extraordinary percentage of won challenges”. He seemed to be daring his own team to go back into that space where nothing matters but this, where every sprint, every challenge is the last sprint, the last challenge, to exist only in that moment in time.

And Chelsea did go there. They pressed high from kick‑off in rejigged 4-3-1-2. James snapped into a couple of challenges. Timo Werner crash-tackled his way past three players, veering off to the right of the penalty box like a fly buzzing down a window pane. Kai Havertz dumped Toni Kroos on the ground. This was all good.

Then it happened. Chelsea kept the ball for two minutes. The stands began to whistle. Tuchel came rushing suddenly to the edge of his rectangle in his tight blue quilted coat, combination punching invisible orcs, pointing at spaces, angles, possibilities. Mateo Kovacic’s neat fizzed pass bobbling about between Loftus-Cheek and Werner, then on into the run of Mount, who had time to settle his stride, look up and belt a wonderful strike of the bouncing ball past Thibaut Courtois. Mount has many cerebral qualities, a state‑of‑the‑art academy product. But he is also an utterly nerveless footballer.

Still Chelsea kept on pressing wildly, recklessly high, pinning Madrid back when they could.

And so it went on after the break. James almost scored, his shot deflected just wide. From there Mount’s corner was pummelled back across the goal by a flying Antonio Rüdiger, a wonderful leaping, barging, alpha dog header.

And with 16 minutes gone it was on: Werner seemed to be blocked off in the box by Casemiro, who then did something odd, opting to simply lie down on his back, like a man leaping down a water slide. Werner jinked past, then saw David Alaba and Dani Carvajal also slipping, sliding, flailing all around him as his shot spun off Courtois and into the corner.

It couldn’t last. Madrid clawed it back to extra time thanks to a piece of outright cackling wizardry from Luka Modric, whose pass to put Rodrygo in on goal came hovering and dipping and howling out of the sky, travelling on some invisible lay line. The decisive goal came from Chelsea weariness, brutally punished by Benzema.

Chelsea still have the FA Cup to play for. But the league is gone, Europe is gone, the limits of what can still be wrung out of the age of Roman have shrunk. We will never again see Abramovich clutching some pot, mute, tolerantly amused, but with the look of a man already silently signalling for the teleport machine. Other rainmakers, other billionaires other impresarios will come and go.

What can’t be denied, whatever the undertones, the deep text, is the spectacle, the circus, the impossible plot‑lines, the notes of glory, the tribal togetherness. Football has become something else in the course of the Abramovich timeline. But one question has undoubtedly been answered. Are you not entertained?