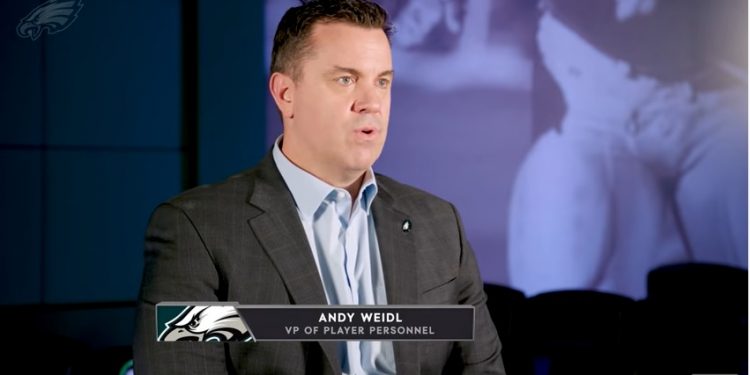 Big news out of Pittsburgh Tuesday night. According to Aditi Kinkhabwala, the Steelers are reportedly slated to hire the Philadelphia Eagles’ Andy Weidl as an assistant GM. Kinkhabwala also reports the team is likely to tab Omar Khan as the team’s next GM, replacing Kevin Colbert.

Pittsburgh native and #Eagles VP of Player Personnel Andy Wiedl is slated to be named #Steelers’ new assistant GM, multiple sources around the league tell me. That means signs point to longtime Steelers exec Omar Khan emerging as winner of the search to replace Kevin Colbert.

Weidl and Khan were two of the six finalists for the GM job.

Weidl began his career in Pittsburgh as an intern in 1998 and 1999. Since, he’s worked as a scout for several organizations and has most recently been in Philadelphia. The Eagles have overturned their front office staff, including firing Weidl’s brother Casey, which likely enticed Weidl to seek a job elsewhere, even as an assistant GM. Weidl would be the team’s first assistant GM in team history.

Khan has been with the Steelers since 2001, primarily as the team’s “cap guy.” He worked with the New Orleans Saints before being hired by the Steelers one year after Colbert arrived. It’s unclear what will happen to Brandon Hunt, who has also been in the running for the Steelers job. Now, it doesn’t appear he’ll be promoted in any capacity within the front office. He recently interviewed for the Buffalo Bills’ assistant GM job.

The Steelers have not made an official announcement but will reportedly announce a decision by the end of this week.

Update (9:45 PM): The PPG’s Gerry Dulac is reporting Omar Khan will be the team’s next GM.

BREAKING: Omar Khan, the Steelers vice president of football and business administration who has been with the organization for 21 years, is expected to be named the team’s new general manager, replacing Kevin Colbert, per multiple sources .