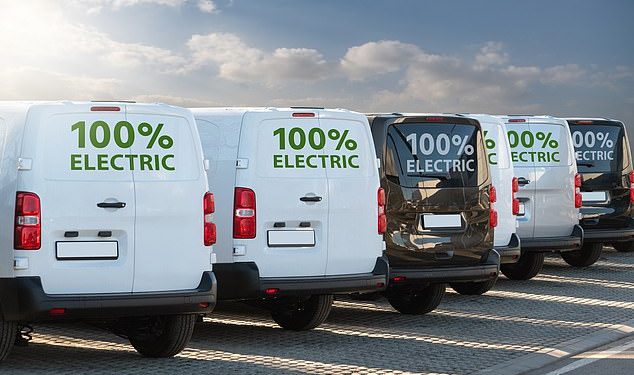 
White van men and women can cut their motoring costs by switching to an electric vehicle but there isn’t enough supply of zero-emission commercial vehicles to meet growing demand, according to a new report published today.

Nearly nine in ten UK self-employed motorists and businesses operators surveyed confirmed they either already own an e-van or will consider buying one in the next five years, says think tank Transport & Environment (T&E).

Its calculation says plug-in vans are a quarter less expensive to own and run than a diesel-powered equivalent.

However, the green transport campaign group claims the availability of these vehicles is falling short, with the market share of e-vans much lower than electric cars. 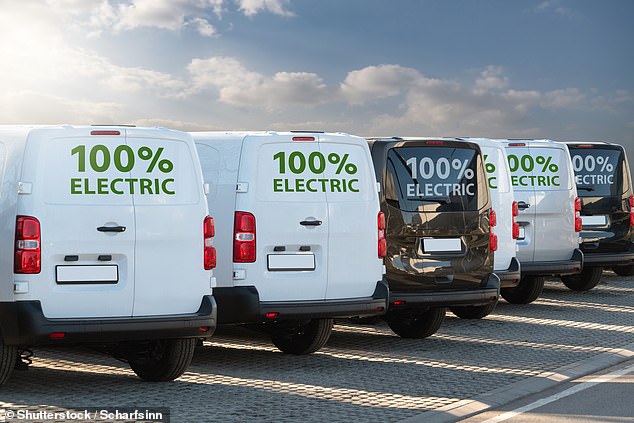 Is white van man being held back from going green? Survey finds that 9 in 10 UK businesses want to switch to e-vans by 2027 but there are concerns there won’t be enough vehicles to meet demand

Last year, some 12,759 electric vans entered Britain’s roads, which represented just 3.6 per cent of the 355,380 total commercial vehicle registrations throughout 2021.

This market share lagged behind electric cars, with 190,727 battery-only passenger vehicles bought in the UK last year, which accounted for more than one in ten (11.6 per cent) new motor registrations.

T&E said the supply of e-vans will continue to fall short of business needs unless the proposed Zero Emissions Vehicles (ZEV) mandate for vans, scheduled to start in 2024, requires manufacturers to sell one zero emission model for every five vans by then.

A ZEV mandate is also expected for passenger cars from the same date, with manufacturers set graduated targets for the number of electric models in their range and the percentage of sales each year leading up to the ban on new petrol and diesel vehicles from 2030.

The study showed the total costs of owning and running an electric van in the UK are between a fifth (19 per cent) and a quarter (25 per cent) less than an equivalent diesel van. 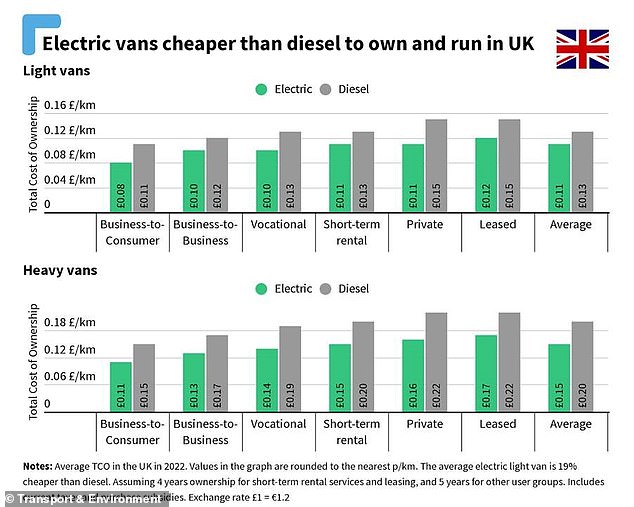 Transport & Environment crunched the numbers on the cost of running light and heavy e-vans compared to diesels, with an electric variant cheaper by 19% and 25% respectively 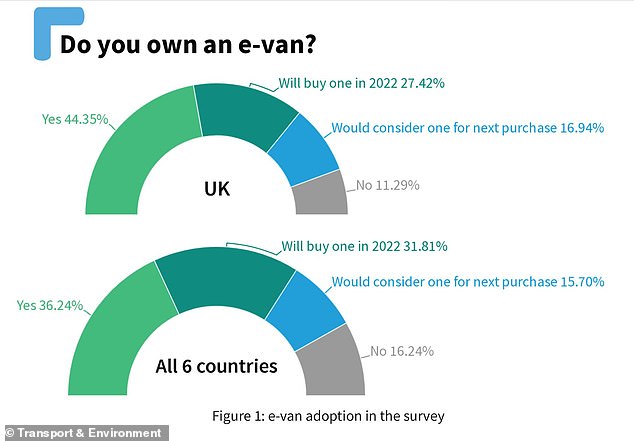 The study approached business across six different European countries: France, Germany, Italy, Poland, Spain and the UK. The UK had a lower proportion saying they would not switch to an e-van 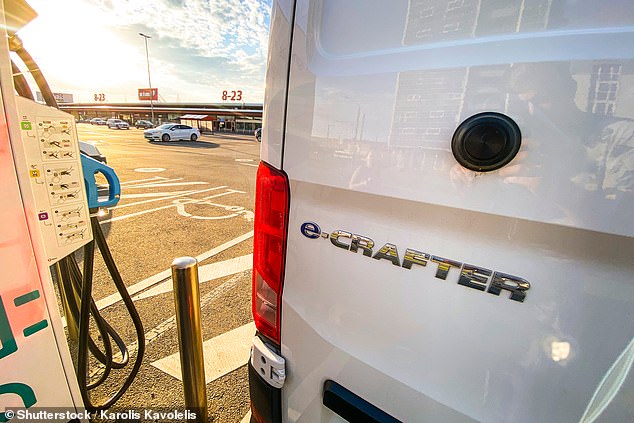 Among respondents who do not already own an electric van, half said they wanted to buy one in 2022 and almost a third (30 per cent) said they will consider buying one before 2027

T&E says this analysis was conducted before the dramatic spike in fuel prices caused primarily by surging oil costs on the back of Russia’s invasion of Ukraine.

A survey by Dataforce on behalf of the green campaign group reached out to British private users and businesses to understand the measure of appetite for electric vans, with 124 taking part in the poll.

Some 89 per cent said they are now ready to transition to battery vans, while the proportion already using an e-van was higher than the average across the six European countries polled (including France, Germany, Italy, Poland and Spain).

Among respondents who do not already own an electric van, half said they wanted to buy one in 2022 and almost a third (30 per cent) said they will consider buying one before 2027.

Of those planning to make the switch, three quarters (75 per cent) said a reduction to their carbon footprint was the biggest attraction.

Around half said it would improve their company’s reputation, with a similar portion of business operators enticed by the lower running costs – another 35 per cent pointing to tax and subsidy benefits. 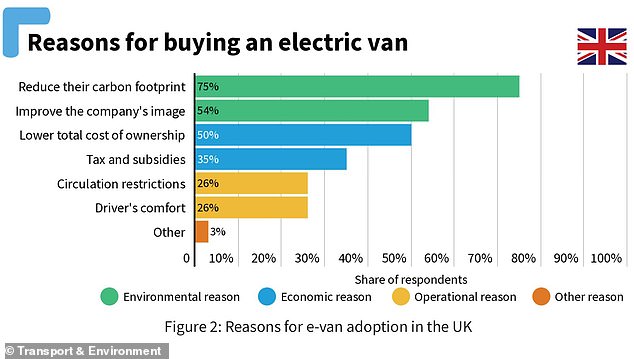 Poll found that most businesses and self-employed traders are attracted to the eco benefits of e-vans, not only reducing their carbon footprint but improving their green appeal to customers 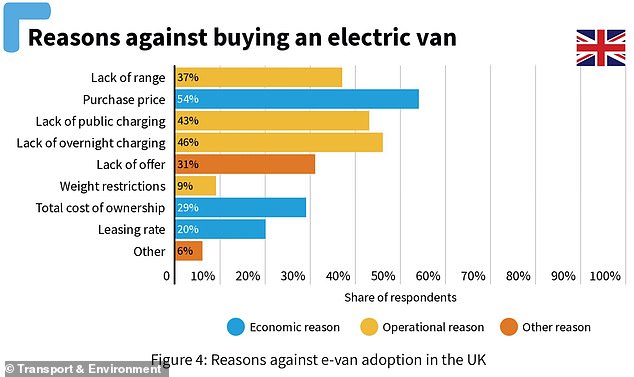 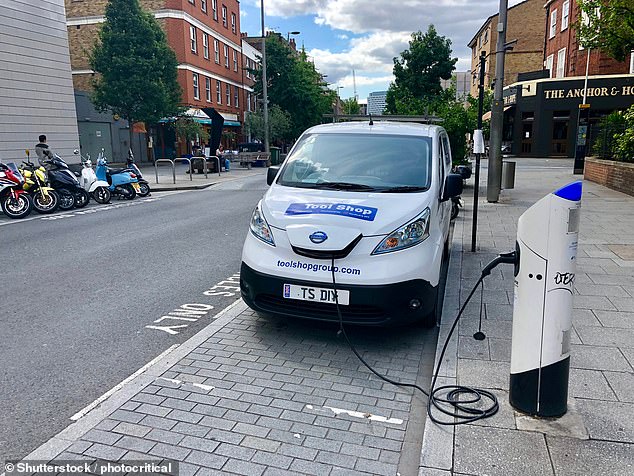 There will be 44 electric van models on the market by the end of the year – more than double the number on offer in 2019 (18 models), the study claims

Ralph Palmer from T&E UK said: ‘Van drivers want to ditch diesel and go green by switching to electric models that are at least a fifth cheaper to own and run. But van manufacturers are drip-feeding electric vans into the UK market.

‘It’s time to open the tap by regulating van makers and make them supply more e-vans to the UK.’

There will be 44 electric van models on the market by the end of the year – more than double the number on offer in 2019 (18 models), the T&E study also found.

A recent study claims white van men cover an average of 9,426 miles a year – around 180 miles in a seven-day working week, meaning they would need to charge their vehicles twice a week.

However, for those businesses who want to make the switch, T&E claims ‘weak’ UK regulations, inherited from the EU, is causing issues.

The transport group says van makers don’t need to supply many electric vans to meet climate targets – in contrast to electric cars where stricter targets are driving the market and sales are far higher.

There are also concerns that manufacturers will prioritise supplying the bigger EU market over supplying vans to the UK after Brexit.

While the ZEV mandate will force a progressive increase in sales, minister have not yet announced interim targets or the details of the regulation.

T&E wants a target of 20 per cent zero emission vans sold in 2024 with high penalties for failing to meet targets that will guarantee the supply of e-vans into the UK market.

Ralph Palmer added: ‘A rapid shift to e-vans is a triple-win for our energy security, business costs and environment, slashing climate and air pollution emissions.

‘But without new regulations, UK businesses will continue to be denied the e-vans they want to use.’

T&E’s report also claims that over a fifth of diesel burned in vans in the UK originates in Russia, in the wake of the Government’s efforts to wind back its use of the country’s exports.

‘This will prevent a simple shuffling of oil supplies which would fail to reduce sales and revenues from Russian oil’.

For eco-conscious businesses looking for an electric commercial vehicle, there is already a number of plug-in vans on the market.

In terms of medium-size electric vans, Nissan’s eNV200 has been on the market since 2014 and recently updated to offer 124 miles of range.

Then there’s the Citroen e-Berlingo van and Peugeot Partner Electric, which have ranges just over 100 miles, and the Renault Kangoo ZE with a claimed 120-mile battery range.

Moving up to larger-scale models, Mercedes has an e-Vito and e-Sprinter, Renault sells a 74-mile-range Master ZE, the London Electric Vehicle Company (LEVC) has the London-taxi-based VN5 and Vauxhall has introduced the Vivaro-e with a 205-mile driving distance on a full charge.

Citroen also has the e-Dispatch and e-Relay vans.

Ford will also be throwing its hat into the segment with the launch of its all-electric E-Transit this year, offering a 217-mile range and price tag of around £36,000. 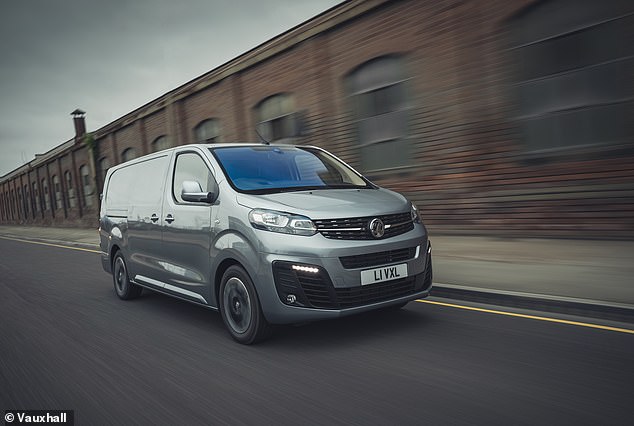 Vauxhall’s Luton-built Vivaro-e is one of the better electric vans business owners can buy. It starts from just over £27,000 and has a respectable range of 205 miles on a full charge 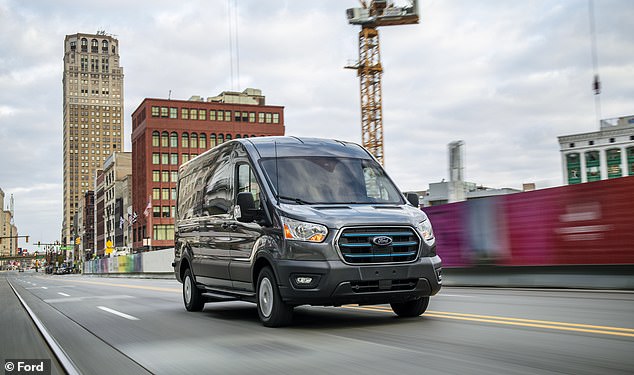 The E-Transit has a quoted 217-mile range, calculated using the latest WLTP test cycle. This usually over-estimates the real life driving distance on a single charge and also doesn’t take into account different bulks being carried in the back 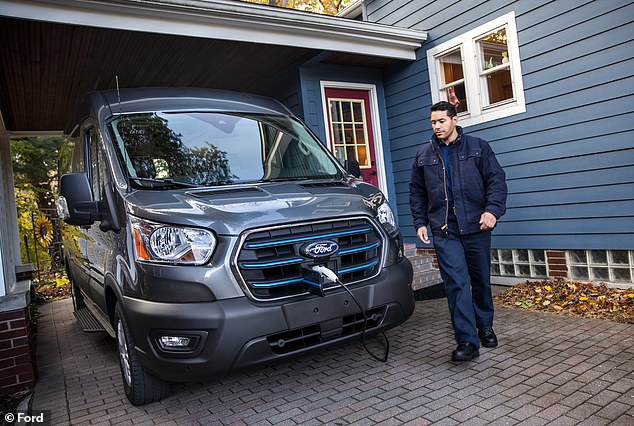 Using an 115kW DC fast charger, the E-Transit’s battery can be replenished from 15% to 80% capacity in a – very specific – 34 minutes. A full charge will take an estimated eight hours, the manufacturer claims

There are even compact vans on the market.

Renault sells the Renault Zoe Van, which deletes the rear bench from the popular electric supermini and has a massive 245-mile range and costs almost £29,000.

And one of the latest green vans delivering parcels to Britons up and down the country from this year is the single-seat Ami ‘Cargo’ commercial vehicle – which is based on the Ami microcar – with prices expected to start from around £6,000.

It has up to 400 litres of loading capacity – which is marginally bigger than the boot of a Volkswagen Golf – to carry packages for ‘last-mile deliveries in urban areas’, such as within London’s Ultra Low Emission Zone. 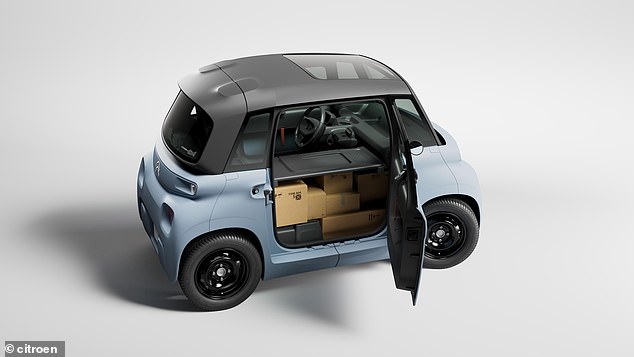 The SMALLEST van in Britain with a 47-mile range: Citroen’s electric Ami Cargo has been confirmed for sale in the UK. The price for the single-seat commercial vehicle hasn’t been confirmed but it will likely cost from around £6,000

Elden Ring: How Players Are Beating the Game Without Taking or Dealing Damage

Elden Ring: How Players Are Beating the Game Without Taking or Dealing Damage