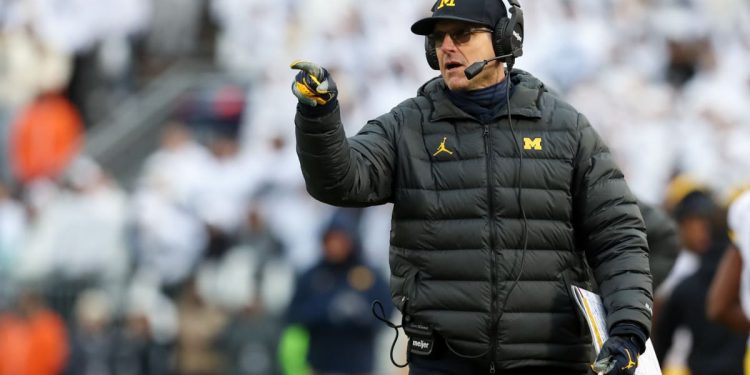 Jim Harbaugh engineered a truly impressive one-year turnaround at Michigan from 2020 to ’21.

Harbaugh and the Wolverines went just 2–4 during the COVID-19-shortened season, leading to a new Michigan contract in which his annual guaranteed salary was cut in half. Entering this season, Harbaugh was squarely on the hot seat.

Michigan turned things around in 2021. The Wolverines went 12–2, beat Ohio State for the first time since 2011, and won the Big Ten before clinching a College Football Playoff berth. After the best season for Michigan in recent memory, the school is working on yet another new deal for Harbaugh, according to The Athletic‘s Nick Baumgardner.

A new contract is still no guarantee. Harbaugh and NFL teams reportedly have mutual interest, and it isn’t clear whether he’s seriously entertaining a jump back to the pros.

Earlier this month, the father of a Michigan commit said that Harbaugh was up front about “entertaining” NFL interest this offseason.

The Raiders and Bears have been reported as two potential landing spots for Harbaugh. Chicago fired coach Matt Nagy after the ’21 season, while Las Vegas is mulling its options after interim coach Rich Bisaccia led the team to the postseason after taking over for Jon Gruden in October.

Gruden resigned after the release of racist, misogynistic and anti-LGBTQ emails reviewed during the NFL’s workplace misconduct investigation into the Washington Football team.

Harbaugh led the 49ers to a Super Bowl berth and two more trips to the NFC championship game in his last stint as an NFL head coach. He posted a 44–19–1 through four years in San Francisco from 2011-14

For more Michigan Wolverines coverage, head over to Wolverine Digest.