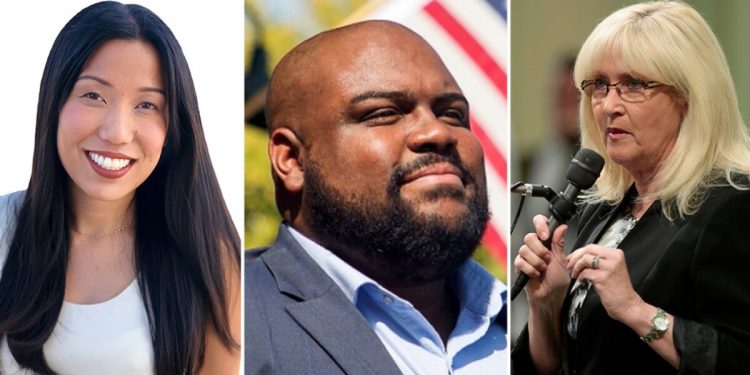 Preliminary results from Fresno and Tulare counties show that two Democrats and a Republican were vying for the second spot.

Conway was not close to winning the position outright by securing more than 50% of the vote. She and the candidate who receives the second-most votes among the six running for the San Joaquin Valley congressional seat will face off in a June election to finish Nunes’ term.

Earlier in the evening, Conway, 71, acknowledged that the election appeared to be heading for a runoff.

“I’ll continue to work hard and make sure that I’m talking to everybody in the district and make sure I’m ready to go on Day One — whatever that day is,” Conway said.

“A black man from a working class background isn’t supposed to shock the state,” Hubbard tweeted. “But that’s exactly what I did, what we did. Because of the hard work you all put into me. And on June 7th we’re going to shock the nation!”

Others seeking the seat are Republican business owners Michael Maher, 38, and Elizabeth Heng, 37.

It’s unclear when the second-place finisher will be decided because mail ballots — sent to every voter in the 22nd Congressional District — have until April 12 to arrive at Tulare and Fresno counties’ election offices as long as they are postmarked by April 5. About 60,000 mail ballots had been received by elections officials as of Monday evening. There are about 415,000 voters in the district.

Turnout was low. Fewer than 3,900 voters cast ballots in person in Tulare and Fresno counties on Tuesday.

James Kus, Fresno County clerk and registrar of voters, said this was not surprising in a special election in a nonpresidential election year.

“There’s no money in this race,” Kus said. “It’s local, smaller candidates rather than big names and limited advertisements and other types of things that push turnout.”

Conway was showing strength in Tulare County, where she served on the county Board of Supervisors for eight years before being elected to the state Assembly. Her father, John Conway, was also a member of the board for a decade. She ran as a self-described “caretaker” for the district with no intention of seeking reelection to Congress. Hubbard is also not seeking election to another seat this year.

Nunes resigned in January to head former President Trump’s fledgling social media company. The cost of the special election to replace him is estimated to be at least $1.4 million, according to Fresno and Tulare counties’ registrars of voters.

Still, the race received little attention as Republicans and Democrats are more focused on the 2022 midterm elections, which will determine control of Congress.

Additionally, the district as currently constituted will no longer exist next year because of the every-decade redrawing of district lines. If Nunes, 48, had not stepped down, he would have faced reelection in less friendly terrain or been forced to challenge a fellow Republican incumbent in another district. (Members of Congress do not have to live in their districts.)

Though the current district tilts Republican, nearly half of it was combined with about half of Democrat Rep. Jim Costa’s district under the new maps. Costa, a Fresno native, is running for reelection in that newly drawn 21st Congressional District.

A small portion of Nunes’ district was placed in the new 22nd District, which encompasses a large swath of Kern County and portions of Tulare and Kings counties. Incumbent Rep. David Valadao (R-Hanford) announced his run for reelection in this district.

Nunes, first elected to Congress in 2002, gained national notoriety for being one of Trump’s most loyal allies and for suing numerous entities including Twitter and his hometown newspaper over perceived slights.