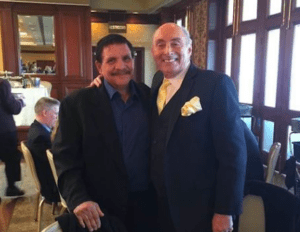 
Victor Valle Jr, the trainer from the fighting family, has passed away, from cancer, at age 73.

The son of the famed trainer Victor Valle Sr, best known for tutoring and cornering Gerry Cooney, the hard hitting pride of Huntington, Long Island, NY, is remembered as a solid citizen by the ex heavyweight contender.

Cooney told us that he recalled Junior as a fine trainer, someone who was often present when Senior and Cooney were grinding. “I was proud to know him, he was a God fearing man, and he’d take the shirt off his back for you,” Cooney recalled. One time, he continued, him and Victor Sr. were in a squabble, so Gerry did a workout with Victor Jr, and “it was a great workout.”

Victor Valle Sr succumbed to a heart attack in 2000. One of his quotes has proven to have a lengthy shelf life: ”Fighters are like beautiful women; too many times they’ll break your heart,” said the elder Valle, who fought as a pro and then trained Alfredo Escalera, Esteban Dejesus and Billy Costello. Victor Jr worked with a few boxers who didn’t pan out, but he didn’t let that break his spirit.

Victor Junior’s son Danny Valle, who fought pro (5-0) from 2009-2011, shared on Instagram that it was the “saddest day” of his life when his father Victor Jr. passed away. “I just lost my father, trainer and best friend,” he shared.

Bronx resident Victor Jr. worked with pugilists like the world-class light heavyweight Telesco, and heavyweight Oleg Maskaev. In a 2005 story by Robert Mladinich on TheSweetScience.com, the late fight game fixture Harold Lederman feted Victor Sr, recalling that Senior used to worry that Victor Jr. would fall prey to streetlife temptations. “By this time Victor Jr. had cut out a nice career for himself,” Lederman told Mladinich. “He was a working man, a trainer, and a chaplain. He was working with some fine fighters and seemed really happy. I got tears in my eyes when I told him how proud his father would have been of him.” Manager Dennis Rappaport, who handled Cooney with cohort Mike Jones back in the day, took to Facebook to offer his memories of Victor Jr., terming him a ‘remarkable man.’ Victor Jr and Rappoport pose at a Ring 8 gala.

“Devoutly religious, he loved his family and his dedication to his fighters was extraordinary,” said the Long Island resident Rappaport.

“In life he never stopped punching, in the latter part of 2002 he called me and said he thought Oleg Maskaev had potential. I checked boxing records and saw that Oleg had been stopped in three of his last five fights (by Kirk Johnson, Lance Whitaker, and Corey Sanders). I made several calls and the response was the same, Oleg was finished, he should retire and he had nothing left. Vic kept insisting that Oleg was a hidden gem until I finally agreed to a meeting which culminated in Vic training him and me guiding Oleg’s career. On August 12, 2005, Oleg became the WBC Heavyweight champion of the world in what was perhaps one of the greatest comebacks in boxing history. Like the Sinatra song, Vic always had “high hopes” and if you remember, even an ant could move a rubber tree plant if it had Victors’ “high hopes!”

Telesco (30-8-1 fighting from 1991-2012) told NYF a couple of his fondest memories of Victor Jr. “I remember the time that I prepared for the Julian Letterlough (1-18-2002) fight,” Telesco said. “The two months that I spent with Victor preparing for this fight, he made sure to cover all the angles, over and over again. I mean by the end of the days I had blisters on my feet because of the new type of training Victor was putting me through. So, after the victory (UD10), when I came back to Gleason’s Gym in Brooklyn most of all the trainers and fighters said, ‘Wow, David, that was the best I’ve ever seen you perform!” And yes, they shared plenty of chuckles along the way. “I also remember Victor riding one of my children’s bikes and it was a small bike,” he continued. “It was three miles to Rye Playland and back, by the time we finished he said, ‘Never again on this small bike!’ and we laughed so hard, we still talk about that day and still crack up. I will miss Victor dearly, he was the best of the best! He was so religious that I was not able to listen to the music that I listen to. We had to listen to his religious music, which I now find myself listening to more and more!”