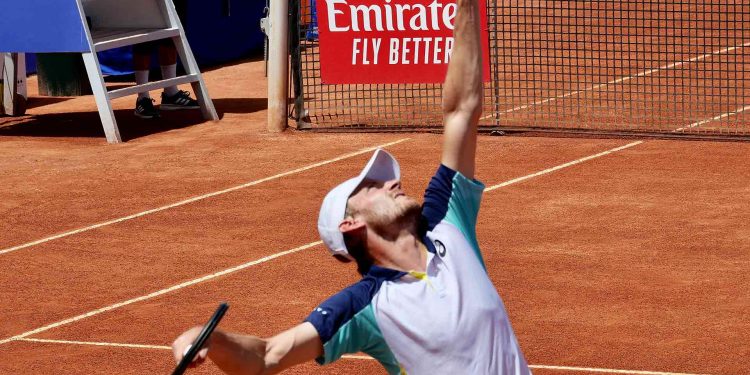 
The last time David Goffin reached an ATP Tour semi-final, he went on to win the Montpellier title last February. He’s on track to repeat that feat at the Grand Prix Hassan II following a straightforward victory on Saturday in Marrakech.

The 31-year-old Belgian defeated Federico Coria, 6-3, 6-3, to reach the title match in his first clay tournament of the 2022 season. After a pair of gruelling three-set victories over Spaniards Pablo Andujar and Roberto Carballes Baena, Goffin was pleased to be off the court in one hour and 23 minutes, especially after dropping the first two games of the match.

“It was a short match, so it’s good because the last two matches were more than two hours and 30 minutes,” he said. “It was not easy. At the beginning I was a little bit nervous. The energy was a little bit down so I had to push myself to play better, to come back, to break back.

“After that, I started to feel more relaxed and my quality of ball was better, and then I started to play really well at the end of the first set.”

Both men saved a break point in consecutive games early in the second, with Goffin making the breakthrough in the eighth game of the stanza before serving it out. After losing his opening service game, Goffin held firm on serve for the rest of the match, saving all four break points he faced from that point.

“I managed to deal with my emotions at the end to finish the match so I’m happy to play another final, especially here, the first tournament on clay,” said the Belgian. “I will give everything tomorrow.”

He’ll next face Slovakian Alex Molcan, who will be competing in his second ATP Tour final after a 6-1, 7-5 result over eighth seed Laslo Djere. It will be the pair’s second ATP Head2Head meeting, after Molcan’s victory at the Melbourne ATP 250 in January.

“He’s a great fighter, he’s moving so well,” Goffin said of his final opponent. “He’s lefty so he’s using his lefty game really well on clay, especially two days ago against Felix, he played well. So it’s a tough opponent.”

Molcan defeated top seed Felix Auger-Aliassime in a third-set tie-break in the second round, then upset sixth seed Botic van de Zandschulp in a three-set quarter-final.

In the semis, after dominating the opening set against Djere, Molcan again secured an early break in the second before the Serbian levelled at 4-4. But the 24-year-old reclaimed the advantage by claiming his fourth break of the match to avoid a tie-break.

“It was a tough match,” Molcan assessed. “Lajovic is a tough player so I knew it was going to be tough. From the beginning I had a break up, so I felt pretty good on the court… It was really tough in the end but I’m really glad that I won.”

House committee hearing on contempt of Congress for Navarro, Scavino