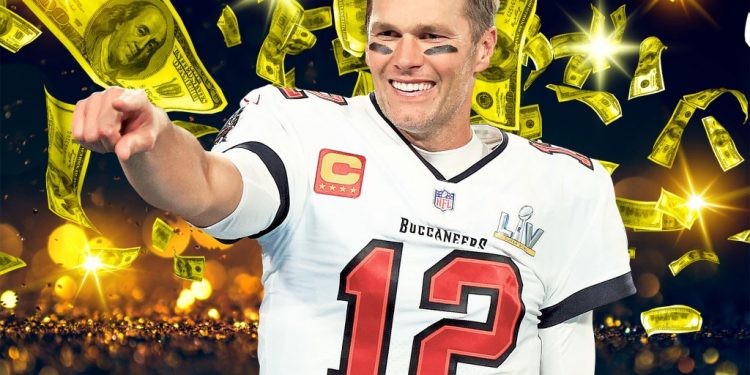 
If you think you’ve seen the last of Tom Brady, forget about it.

The legendary quarterback, who announced his retirement this week after 22 years in the NFL, is eyeing a bevy of ventures that will thrust him into the spotlight in 2022 and possibly for years to come.

And could make him the first former player to become a billionaire.

“I have loved my NFL career,” the 44-year-old posted on Instagram after calling it quits, “and now it is time to focus my time and energy on other things that require my attention.”

He no longer earns $27 million a year as a QB, but Tom Terrific is looking to expand his health and clothing companies (TB12 and BRADY brand), shoot a movie that’s all about him and cash in big from cryptocurrency and NFTs.

If you hate him for all that success, Brady doesn’t mind. He’s even shrewdly tapped player-hater bile to his advantage in TV ads. Is there nothing this guy can’t do?

Absolutely not, according to one expert.

“He’s the NFL’s GOAT [greatest of all time] and his brand is among the strongest of any pro athlete,” said Bob Dorfman, a sports marketing analyst, noting that Brady has snagged $180 million in endorsements during his playing days and recently got $170 million in funding for his NFT company, Autograph.

“So he can pretty much do whatever he wants — broadcasting, team ownership, speaking engagements, book-writing, pitching products for current sponsors, new deals with family-oriented brands, or just building up his existing companies,” he said.

“I don’t see Brady fading from the public eye much in the next five to 10 years. He’s got billionaire potential.”

MarketWatch this week tabbed Brady’s net worth at $475 million, putting him behind only Roger Staubach — who’s got $600 million — as the richest former NFL player.

Not a Brady fan? Well, you won’t want to hear this: The seven-time Super Bowl winner has started his own film company (199 Productions) and plans to release “Man in the Arena,” a documentary with ESPN about his title run last year with the Tampa Bay Buccaneers.

Also in the works is his first feature film, “Eighty for Brady,” which tells the true story of a group of friends whose lifelong dream is to go to the Super Bowl and meet their hero. Naturally, Brady plans to play himself.

Would Hollywood be of interest?

“It seems like if Tom Brady wanted to do a movie he could do it in a minute,” said Sam Spira of Xtreme Couture Management, noting he “probably has friends who do huge budget movies.”

“I would advise him to get behind the camera,” said Hollywood director Ron Shelton (“Bull Durham,” “White Men Can’t Jump”).

“As an actor, you are at the mercy of the script and the director. He is used to being the man in charge. Maybe he should stay in charge. I think Brady would be a great producer.”

Announcing or color commentary would seem a natural fit. And those jobs pay well — Tony Romo rakes in $17 million a year. Brady could earn that much or more, according to Spira, though he might be wary of the criticism Romo gets for his quirky and sometimes questionable remarks.

Not every startup of Brady’s is a sure thing.

When rapper Lil Nas X launched a business to produce NFTs — pixelated online images known as non-fungible tokens — the performer was at the height of his popularity. But his followers hated the idea.

“The fan base can react badly to NFTs because they think they’re a scam,” said David Gerard, author of “Attack of the 50 Foot Blockchain,” a 2017 book that warns of pitfalls in the virtual markets.

Indeed, Lil Nas got hit with a backlash, Gerard said. “He promptly removed all mention of the NFT from his publicity.”

Brady is spreading the risk with his NFT company Autograph, which he founded last year, by roping in other famous athletes, including Tiger Woods, Wayne Gretzky and Usain Bolt. It produces slick graphic images of sports and entertainment stars.

Lionsgate and DraftKings also have partnered with Brady in the venture. On Jan. 19 the company announced it had raised $170 million from two venture capital firms.

Brady has backed the crypto company FTX and shot a series of humorous TV ads for a $20 million campaign that co-stars his wife, Gisele Bündchen, and a bunch of actors posing as regular-guy pals: a chef, a plumber and Jets superfan Fireman Ed.

In one spot, Brady phones up a bartender frenemy in Boston named Bill whose cellphone shows the QB’s photo and a caller ID: “TRAITOR.”

“This guy!” an exacerbated Bill says before picking up.

“I’m getting into crypto,” Brady tells him.

Brady’s marketing savvy was evident long before he called it quits.

For most of his playing days, he accepted below-market contracts so that the teams he played for — New England and Tampa Bay — had the cash to build title contenders.

Brady’s $27 million salary last year — well below no. 1 Patrick Mahomes’ $45 million — didn’t even put him among the top 10 highest paid quarterbacks in football in 2021.

Winning Super Bowls was worth more to him than being the best paid player, according to Dorfman. “In 2021 Brady’s off-the-field income of around $45M was nearly double that of his football salary,” he said.

Brady’s earning potential is powered by “the three Ps,” he said. “Performance, personality and purity.”

Meaning he’s a great player, is likable and charismatic and hasn’t been involved in any scandals — other than his messy breakup with former girlfriend Bridget Moynahan, whom he impregnated, then split from just two months before she gave birth to their son Jack in 2006.

But even that chapter he’s turned into a positive by Brady including both Moynahan — now happily married — and Jack into one blended family. Bündchen calls Jack, a 14-year-old who works as a ball boy for the Buccaneers, her “bonus child.”

And the whole Brady bunch has been photographed hanging out together.

There aren’t many ex-athletes who are billionaires, but the richest are both well ahead of Brady.

Michael Jordan ranks no. 1 with $2.6 billion, followed by Tiger Woods, who has $2.1 billion, according to Sportico.

The ultra-competitive Brady will only want to top them.

CSU chancellor under fire over handling of sexual harassment allegations

UK is ‘set to bin 3.5million Pfizer vaccine doses’ despite their shelf life being extended

UK is 'set to bin 3.5million Pfizer vaccine doses' despite their shelf life being extended