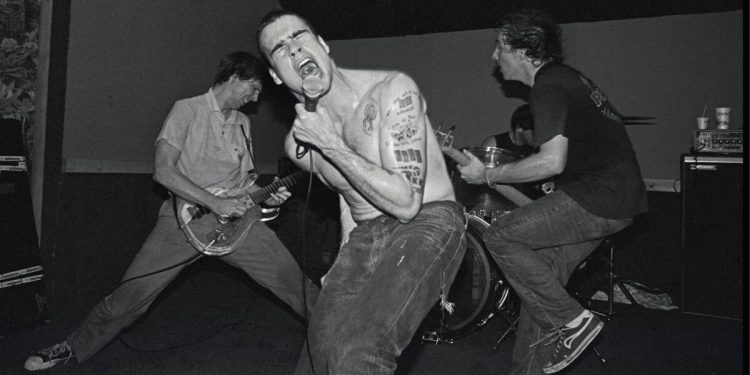 
The June 29, 1980, edition of this paper spoiled Angelenos’ Sunday morning by dropping a dire warning on their doorsteps: The punks had arrived, and they were murderous.

Audiences at punk shows “mug each other,” Patrick Goldstein reported. “Accounts of reckless violence, vandalism and even mutilation at some area rock clubs read like reports from a war zone.”

At the center of this alleged chaos was the band Black Flag, whose shows had become a magnet for police crackdowns since its formation in Hermosa Beach in 1979. They brought some of that scrutiny onto themselves: Founder and guitarist Greg Ginn finagled a slot at a family-friendly festival at Manhattan Beach by saying they were a Fleetwood Mac cover band, then delivered a typically loud, profane set. But the media’s pearl-clutching was disproportionate to the danger. Ginn wasn’t trying to sow anarchy, just locate the spaces that wouldn’t reject punk outright.

In “What I See,” his lively, lavishly assembled collection of Black Flag photos, Glen E. Friedman recalls the violence as wholly on the police side of the ledger. Promoters called in the LAPD, scared by “overwhelming crowds that were showing up that often looked threatening to them.” The band goaded the cops with songs such as “Police Story,” and its fury is palpable throughout the book — even rehearsals look like barnburners. But the response — SWAT teams, billy clubs, helicopters — was absurdly disproportionate.

“Corporate Rock Sucks,” Jim Ruland’s well researched history of Ginn and the label he founded, SST Records, puts some context around the absurdity. And it’s a thrilling story in the early going, the tale of a culture being stubbornly constructed from the ground up. In its 1980s heyday, SST released at least a dozen canonical rock albums that were notable for their rejection of convention. Black Flag’s piercing hardcore and Sabbathy sludge shared little with the Minutemen’s springy, spiky punk-jazz fusion, the Meat Puppets’ Dead-like excursions or Hüsker Dü’s blend of pop savvy and stun guitar. But together, they made SST the decade’s preeminent indie label. As Ruland writes: “Ginn was interested in punk rock as a concept — a creative call to arms — not as a specific style of music.”

In that regard, it’s a little disappointing that Ruland — a fiction writer who’s also co-authored two earlier books on Southern California punk — generally sticks to label history and doesn’t make a stronger argument on his subject’s behalf. SST’s accomplishment wasn’t just signing a host of enduring bands; it became the wellspring and prime mover for much of Gen X culture and the indie rock that followed. Black Flag frontman Henry Rollins exemplified a generation’s sour, antiestablishment, heavily ironic posture. The second side of its 1984 album, “My War,” was a grunge touchstone. Hüsker Dü and Sonic Youth gave the ‘90s alt-rock explosion its melodic textbook. Negativland set a template for anticorporate pranking and culture jamming. The touring paths that indie bands across the country took — and still take — were largely developed at SST’s Torrance offices. Its ads and review copies fueled a generation of zines and their writers.

So much of this sprang from Ginn — or more precisely, from his resentment of authority and institutions. Beyond the police bullying and hyperbolic media attention, Black Flag’s recording career was stalled by an extended legal squabble with MCA Records after an exec dubbed 1981’s “Damaged” an “antiparent record.” (The band made that into a literal badge of honor, slapping stickers with the quote on copies of the LP.) Ruland’s chapter titles are framed as confrontations led by the label — “SST vs. the Media,” “SST vs. Hardcore” — but the battles were often Ginn’s.

Still, Ginn wasn’t anybody’s idea of the leader of a cultural movement. He grew up obsessed with ham radio and other engineering-geek phenomena. (SST was originally a small electronics outfit, short for “solid-state transmitters.”) He spoke little as a musician or label chief — and not at all to Ruland, who was told, “I retired from interviews a long time ago.” In “What I See,” Ginn is usually dressed as if he’d just come off a shift assistant managing a Kroger’s.

What made Ginn, Black Flag and SST so distressing to outsiders was partly a matter of aesthetics. Cover art and show flyers designed by Ginn’s brother, Raymond Pettibon, featured feverish, provocative imagery obsessed with sex and death. It was also a matter of timing. The soporific Reagan era made the music and lyrics SST trafficked in seem an active threat. The infamous 1982 punk-rock episode of “Quincy, M.E.,” plainly inspired by news coverage of Black Flag from The Times and elsewhere, was so determined to depict the scene as violent and nihilistic that Jack Klugman’s no-nonsense Quincy took the remarkable step of defending the ‘60s counterculture to make punk seem all the worse.

SST’s contempt for law-and-order conservatism didn’t exactly make them what we’d consider progressive today. Women and people of color were scarce; Black Flag bassist Kira Roessler curtailed her recovery from a hand injury for fear of being booted from the band, leading to permanent damage. Songs like Black Flag’s “Slip It In” were overtly misogynistic. Cover art and SST letterhead flirted with Nazi rhetoric. Bad Brains frontman H.R. was known for homophobic outbursts. The label came grotesquely close to releasing a Charles Manson album.

Ruland ably catalogs these ups and downs — and deserves much credit for keeping the narrative afloat through the ‘90s and early aughts, well after the label had exhausted whatever authority the zeitgeist had conferred on it. He does assume a readership that knows the bands well, which makes for limp music criticism at times. (One Black Flag album “suffers from an overall lack of quality.”) But he also delivers a potent cautionary tale about business ideals gone sour. After bands either broke up (Black Flag), met tragic demises (Minutemen) or jumped to majors (Hüsker Dü, Sonic Youth), Ginn struggled. He held bands to onerous contracts and became unreliable about royalty payments. He got into an extended legal squabble with Negativland that only made him look petty and hypocritical. He passed on Nirvana but signed scads of mediocre acts that diluted the brand.

All of which makes Ruland’s title double-edged: Corporate rock sucks, as SST’s slogan put it, because it’s litigious and exploits an economy of scale that mistreats individual artists. By the early ‘90s, however, you had to squint to see what distinguished Ginn from the suits SST railed against.

“Everything about Greg is unfathomable,” the late Screaming Trees frontman Mark Lanegan told Ruland. “He is a huge enigma.”

The final pages of the book are mainly dedicated to expressions of disappointment in Ginn, who now uses SST almost exclusively as a vehicle for his own projects. He’s out of touch with Pettibon, remains standoffish with artists and resists releasing masters that could fuel reissues for middle-aged Gen Xers eager to invest in their nostalgia. (Ruland speculates many tapes are lost or irreparably damaged.)

In fact, it may be that the world SST created doesn’t mean much beyond Gen X nostalgia now. An ambitious artist no longer needs a record label, however defiantly anticorporate, to get attention; selling out, once a stigma, is now an ambition. But before SST — and Ginn — strayed from their founding ideals, they served as evidence that a community didn’t have to promote tribalism or meet purity tests — and that somebody needs to thumb their nose at conservative pieties. Those principles are enduring.

Athitakis is a writer in Phoenix and author of “The New Midwest.”

How to sell an appartment building with 8 appartments? : RealEstate