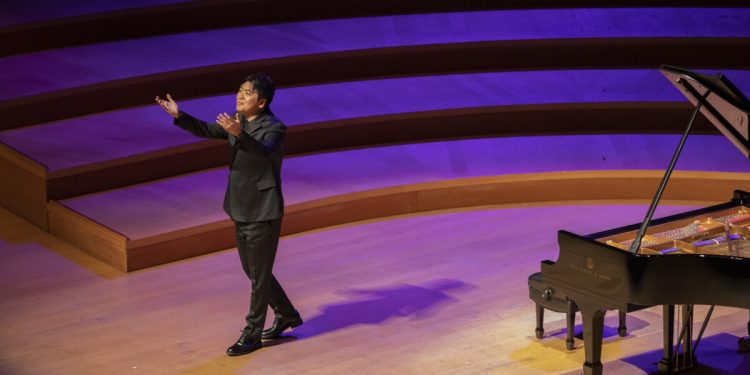 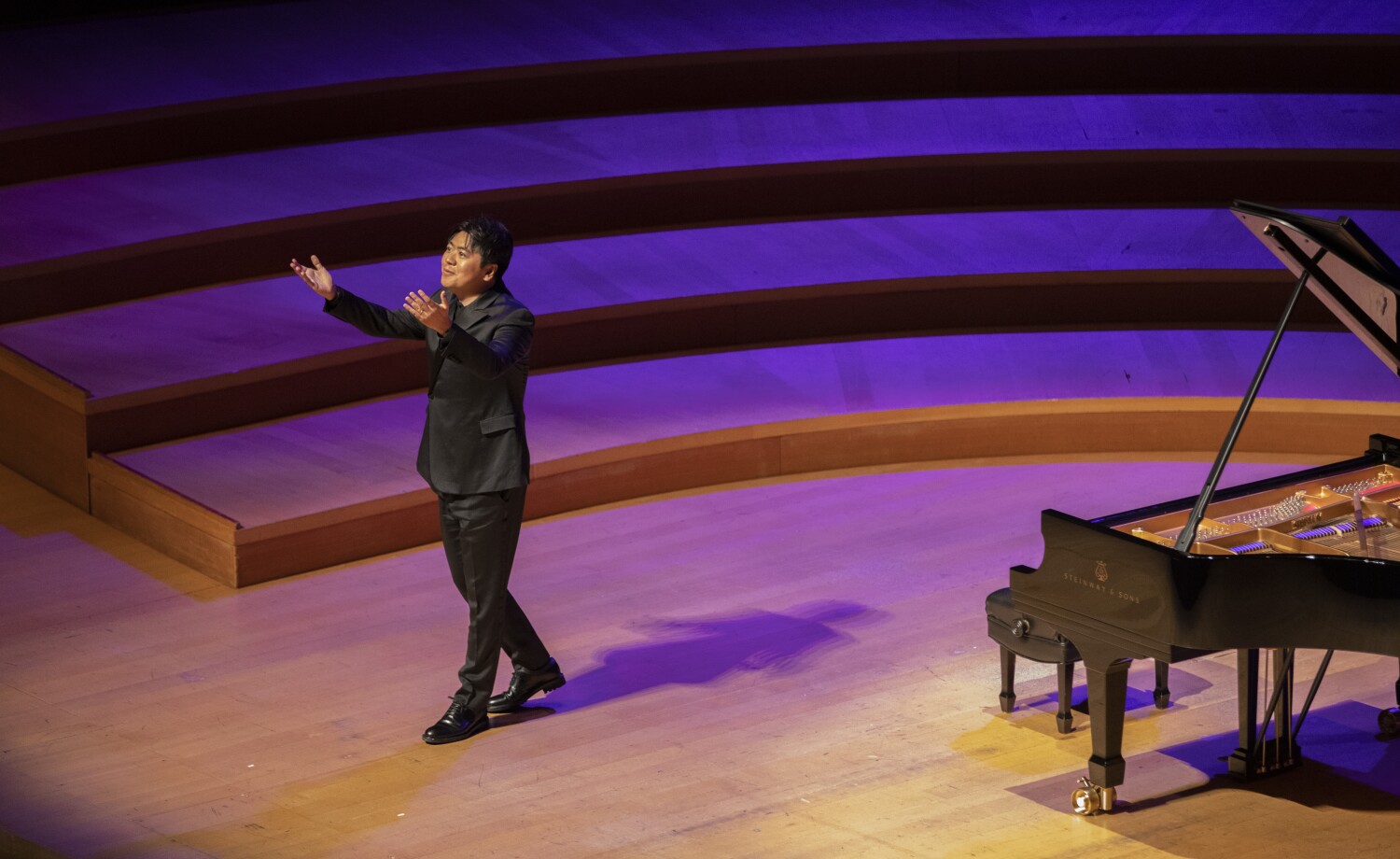 Comparisons are odious but obvious. Both pianists are Chinese and of the same generation: Lang Lang is coming up on 40, and Wang turned 35 this year. Both are highly image-conscious. Both have seemingly superhuman techniques. Both enjoy (and encourage) pop-star-style fan bases. Both have tried, with varying success, to overcome the sniffy charges of flashiness.

The fact is, they are flashy. But they happen to be exceptional musicians who take themselves very seriously. Both are products of the Curtis Institute of Music in Philadelphia and revere tradition. Throughout their careers, each has sought to work regularly with — and learn from — some of the world’s most outstanding musicians.

So much for similarities. Differences mean more. Neither pianist sounds anything like the other. They phrase differently. Their personalities are dissimilar. Their musical styles mesh so little that it might prove wonderfully dramatic to hear them play two-piano repertory.

Lang Lang played Bach’s “Goldberg” Variations. Wang began the two halves of her program with Beethoven’s Piano Sonata Opus 31, No. 3, and Scriabin’s Piano Sonata No. 3. Yet their ideas about what a formal piano recital could be and how familiar repertory might be played were radically opposed.

Lang Lang announced that his evening would be Bach’s “Goldbergs,” which can last somewhat over an hour (and his lasted somewhat longer than that). Still, for whatever reason, he started with Schumann’s short “Arabesque.” Perhaps he agreeably chose to make life easier for our photographer, given that the pianist allows only the first few minutes of his performance to be shot. Or maybe he was in a moon-besotted mood and wanted to show to what degree he could milk Schumann of the last dregs of romantic fancy. The result was bizarre yet beautiful.

Throughout the variations, Lang Lang sprinted and he stalled. He rushed through contrapuntal thickets, like a rabbit hopping in the woods, and slowed to a snail’s pace in minor-keyed variations. By the time he reached the “Ouverture,” the middle point 16th variation, it felt like an exhausting hour had passed. The pianist looked drained. But he had just begun.

He brought a hugeness to the “Ouverture” and then went on to create all kinds of new pianistic wonders in passages where his hands were but a blur, and Bach’s convoluted lines proceeded faster than my brain could process.

I don’t know how he did it much of the time. I don’t know why he did what he did some of the time. But these “Goldbergs” were enthralling for being daringly over-the-top. The dressy crowd, many of whom may well have been drawn by Lang Lang’s celebrity, sat in inspirational silence. Once the performance ended, there was an eruption of coughing just before the eruption of ovations. Lang Lang clearly created a communal need for silence that inspired suppression of bodily needs.

Wang, for her recital, didn’t announce her program in advance or on the stage. She wanted her audience to listen without expectation. Without announcing it, the Los Angeles Philharmonic, which presented the recital, posted the program on its website after the fact.

Of course, there was the expectation that Wang would wear a memorable gown. Enough has been said about her outfits, but now that she guards her image to the point of requiring photo approval (an unacceptable demand for The Times or any other responsible news outlet), there can be no showing why the audience gasped when she walked out in what looked like a strikingly revealing formal black unitard.

Her playing was, even for her, electrifying, and, of course, she kept everyone guessing. Where Lang Lang is a melodist, Wang is marvel of rhythm. Her Beethoven was bright, brittle and marked by dramatic contrasts. Her audience was more informal and raucous than Lang Lang’s. Someone shouted out, sarcastically, “Did you write that?” at the end of the sonata.

Schoenberg’s Suite, Op. 25, an example of his early supposedly ungracious 12-tone style, is just the thing to keep traditional audiences away. Wang gave it a theatrical hard-metal rhythmic swag that brought cheers.

In a pair of piano etudes by György Ligeti that followed, her technical brilliance might have verged on the machinelike, except that she made it more than evident that a living, breathing human was seated at keyboard. Like Lang Lang, it wasn’t for musical mortals to know how she did it, but the why was easy. She made Ligeti sound exactly how he must have meant his etudes to sound if only there were someone such as Wang who could make that happen.

For the second half, Wang, in a more conventional gown, played Scriabin like Vladimir Horowitz’s Scriabin, unfussy but full of glittery dramatic tension. The short set ended with a Spanish showpiece from Albèniz’s “Iberia” and two preludes by Nikolai Kapustin, who died in 2020 and is commonly referred to as a jazz-inspired Russian composer. He was, however, born in Horlivka, Ukraine, and like Prokofiev and many other Ukrainian artists during the existence of the Soviet Union, wound up in Moscow.

Wang’s six encores wove through Mendelssohn, Tchaikovsky, Philip Glass, Michael Tilson Thomas, Arturo Marquez and Kapustin. Here, she allowed herself to become extreme. Glass’ Piano Etude No. 6 was exceptional in its dramatic contrasts. Her own arrangement of Marquez’s “Danzón No. 2,” a Gustavo Dudamel favorite (that runs through the new documentary “¡Viva Maestro!”) demonstrated that she has a Horowitzian flair for piano writing.

In the end, Lang Lang and Wang do have one very important thing in common. They are, each in their individual ways, freshening and modernizing the piano recital, attracting a modern audience in the process. It is a welcome sign of renewal.